I like to knit, but I have kind of a short knitting attention span; I'd rather not start a project unless I can reasonably expect to see it to the end in short order, before events intervene or I just get sidetracked. On top of that, I prefer to use quality yarns, but I don't like to spend a lot of money. So, I look for things I can knit from a single skein of yarn or less. This also allows me to sometimes rummage in the yarn shop remnant bin, for that discounted skein that's the only one left of its dye lot.

I like to knit socks, too, which are actually rather time-consuming, but they don't use a lot of yarn and the whole project is easily contained in my small knitting bag (it's a canvas tote that's less than a foot deep and wide). That's my other criteria: I want the project to be small and easily portable, so I can knit at the coffee shop or wherever I like. And I don't mind sticking that project out to the end, because I end up with a pair of handknit socks, which is a wonderful thing. No less an authority than Pablo Neruda has extolled the virtues of hand-knit socks in his poem "Ode to my Socks."

The other beauty of knitting socks is that you learn some skills that can be applied elsewhere; the short rows used to turn a heel can also be used for other rounded shapes, like little critters with well-formed behinds that allow them to sit up.

A couple of years ago, after knitting a bunny from a Fiber Trends pattern, which turned out much bigger than I had hoped it would (it was felted after knitting), but taught me a lot about how to knit  an animal, I started thinking about making up my own patterns. There were things about the Fiber Trends pattern I didn't like, too: it seemed unnecessarily complicated, and, like all their patterns, it's printed on a kind of dark teal paper, which can make it a little hard to read. I assume they do that to discourage people from photocopying their patterns to share with others, and I find myself simultaneously sympathetic and disapproving of that. Why shouldn't friends share patterns? Knitting is such a social activity, it just doesn't seem right to be too proprietary about it.

I've knit some cat toys totally freehand, without a plan or a pattern, using wool yarn so that I can then felt them in the washing machine, which makes them firmer and stronger to hold up to the kind of abuse cats dish out. I can't find the mouse to photograph for this blog (it's probably under the sofa or something), but here's this random alien-looking thing that I made when I first learned how to do an i-cord. Making cat toys is a fun way to do improvised knitting, since it doesn't really matter how they turn out.

Other small projects I've made are a coin purse, a needle "purse" (like a needle book, only it resembles a purse more than a book), and a frog. With each of these, I took detailed notes, and made revisions, and finally got around to typing them up and publishing them in a little booklet, which I decided to call a zine and name it Remnants, with the intention of sharing more scrappy projects in the future, not always about knitting. It's available at my Etsy shop, and it's printed on white paper, with permission granted to reproduce and share it with your friends, because that's what I would do. 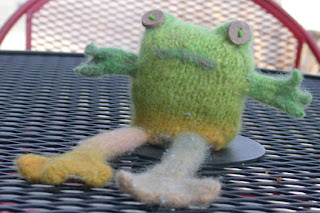 So, if you're a knitter, you might like to check it out here.
Posted by Sharon Parker at 8:26 PM