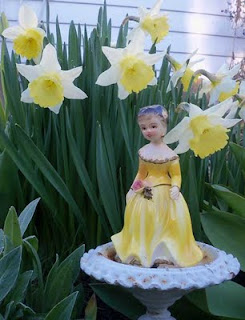 Julia Johnson was the former owner and gardener at this house. She passed away a few years ago and the house sat empty for a couple of years while the family waited for the market to improve, or so I understand. I'm glad they decided to sell it when they did, because it was right when we were looking last spring (actually, I think they had listed it in January and by spring when we saw it, they had lowered the price—must have reached that point when an asset becomes a burden!)

We closed on the house on July 2 last year, spent the month of July madly doing as much as we could to upgrade and spruce up the house, as well as simply to make it better suit our own tastes, then moved in at the end of July. So, our focus all last summer and fall was on the inside of the house (except for installing gutters to redirect the rain from the roof, but that was for the sake of the inside, as well, of course). Now it's time to start on the outside, my favorite part!

Julia was quite an avid flower gardener, but apparently not a vegetable gardener. The space at the back that we had assumed must have been her kitchen garden because it enjoys such terrific sunlight and is completely overrun with weeds, raspberries, and a random assortment of flowers, was, as it turns out, where the family used to park their second car. That would explain the two slightly skewed rows of heavy concrete pavers we've been hauling out of there! (We hardly noticed them last summer, when the weeds were three feet tall!)

Our neighbor Joe informed us that Julia "threw some raspberries in there" because she didn't know what else to do with the suckering canes. Ah, raspberries; a mixed blessing, indeed! There is a thriving thicket of them against the fence that we share with Bonnie and Joe—a thicket that grows on both sides of the fence, and it's not clear which side it started on! Taming that thicket is one of my daunting tasks this summer. But, fortunately, we all love raspberries, so it'll be a labor of love.

I imagine the same explanation applies to the clumps of lupines, blackeyed Susans and echinacea in the former parking space, all of which also grow elsewhere in the garden. Chances are she needed to divide these robust perennials and couldn't bear to discard them. Who can blame her? I have started potting up clumps of them to bring to a spring plant swap or two. It'll nice to have something other than orange daylilies to offer!

And then there are the daffodils, tulips, and grape hyacinths. What a treat to see these emerging and opening up this spring. I should not be surprised there are so many daffodils, because it would seem that Julia really liked yellow. We painted over a few faded yellow walls last summer, and when we visited the estate sale for this home last June, I selected this figurine dressed in yellow as a memento of Julia. The daughter-in-law taking payment said, "This one looks like Julia, too." Whether that's true or she just said it because I told her why I was buying it, I like to think of this pretty little lady as Julia's totem, or maybe I should say "avatar." I named her Julia, anyway. She's too fragile to keep outdoors, but I brought her out to the garden to pose alongside Julia's daffodils for a photo.
Posted by Sharon Parker at 11:05 AM