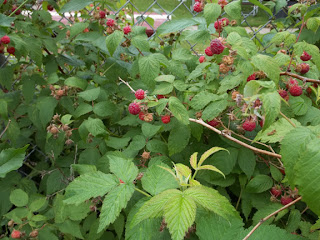 I was digging out a weedy patch between the house and our newly laid patio in back when I unearthed a few bulbs and then remembered there had been daffodils here in the spring. Darn!

I am trying to go around and take stock periodically so I know what's hiding amongst the weeds before I dig, but I haven't been as diligent as I need to be with that. Julia had an abundant flower garden in this sunny backyard, and I'm told by neighbors that she kept up with it right up to her final days, when she was in her 80s. But the house sat empty for two years, and last summer when we moved in, our attention was on the inside of the house, so that made for a third summer of neglect. Now all the gardens are completely overrun with weeds, as well as with raspberries and daisies—which may or may not qualify as weeds, depending on how you look at them. I see them (raspberries and daisies) as plants with desirable traits that tend to be a tad too exuberant in their growth habits. A few more years of neglect and I think the whole yard would become a raspberry-daisy thicket-meadow.

The daisies are really pretty easy to deal with, and I do enjoy them when they pop up in the lawn or cluster around the clothes pole where the mower can't quite reach them; and they harmonize nicely with most of the other flowers, such as the sundrops oenothera.

But the raspberry thicket is another matter—I know that it's hiding some real gems under its thorny arching canes, and yet the promise of their sweet berries had me reluctant to start cutting them down and digging them out while it was still cool enough to wear long sleeves for the job. It's not that I have any intention of removing them completely, nor any illusion that I can—they originated on my neighbor's side of the fence and will continue to volunteer on my side for, well, as long as my neighbors have theirs. And that's alright by me, I love raspberries. But they need to be confined to the area alongside the fence that directly corresponds to where my neighbors have them, and the flowers that are growing in the raspberries need to be relocated—I wouldn't have even known I had a pink dictamnus (gas plant) had my neighbor Bonny not told me. I found it blooming in amongst the raspberries, almost completely hidden by them.

But I don't want to move them in the middle of summer, and not while they're flowering, and not until I have prepared a suitable new garden bed for them.

So in the meantime, I am taking pictures and making notes, and really should be shoving plant markers into the ground to identify them, especially the ephemerals, before they finish blooming and I forget what they are! Even those that are easy to ID from their emerging leaves, like the lilies, need to be labeled as to their color and height, so that I can group them in vignettes that I find pleasing.

Even though we paid frequent visits to this backyard last June after our offer was accepted, and were here every day after July 1st when we closed on the house, and moved in at the end of July, I'm "discovering" all sorts of flowers that I didn't remember seeing last summer, or had forgotten their color. Here are a few gems amongst the weeds that are currently blooming or nearly finished. 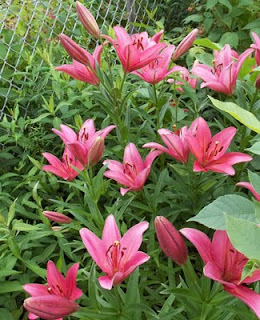 Rosy lilies that were all but hidden behind the raspberries—until they bloomed. 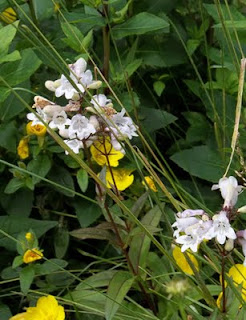 A surprise discovery of a white penstemon mingling with the oenothera. 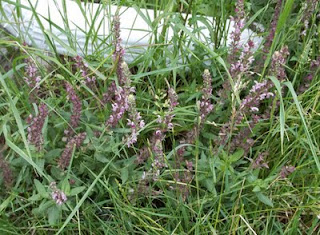 Some rose-colored salvia that will need to be untangled from the grasses. Behind this (on the other side of the downspout) are two platycodon, which are not yet blooming, but which I photographed last summer and so was reminded of them when I looked at those photos (below). 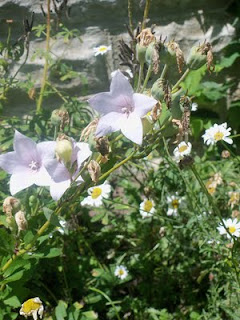 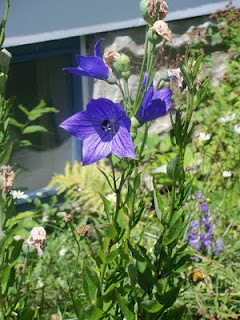 And more, many more. I have an abundance of perennials here, I just need to divide them and relocate them, after not only preparing new beds, but also making a plan for how I want to group them.

Good thing we're going to be here a long time!
Posted by Sharon Parker at 3:50 PM