A little harvesting, here and there, despite the chaos 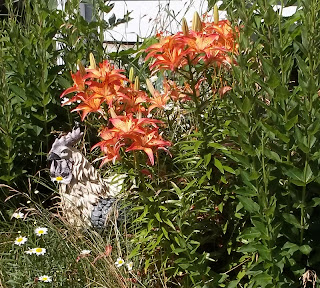 Even though the chaotic transitional state of our landscape means I haven't done much planting of my own yet, I have been able to gather what I may from the existing gardens, as well as from the little bit of planting I've done so far myself, in pots or baskets.

Harvesting bouquets is easy, of course, with the abundance of flowers and greens; sometimes I use a few leaves of the plain green lance-leaved hostas in bouquets. I find this particular hosta rather ordinary as a garden plant, but its medium-to-dark glossy leaves do complement flowers and showier foliage nicely. I also have two kinds of ferns: the common ostrich fern and a more lacy one, probably a type of lady fern (athyrium). 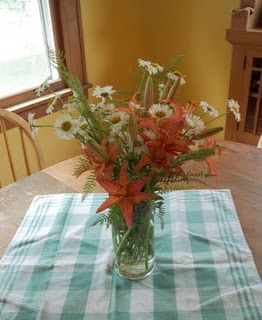 I used the lady fern in a bouquet recently, with a speckled orange Asiatic lily that started blooming about a week or so ago, combined with several of the wild oxeye daisies that are growing everywhere.

Edible plants include the rhubarb, which I have neglected to pick so far (I think of it, and then I forget! Or, when I remember, it's too hot to cook anyway). I should really pick some to freeze, at least. Conventional wisdom has it that you don't harvest rhubarb after the first of July, but my sister-in-law once gathered several stalks in late summer, shortly after moving and discovering that the garden boasted a robust rhubarb plant. It ended up none the worse for the late harvest, and the rhubarb tasted fine, so I don't think it really matters much. Perhaps plants that are only a few years old need a longer period to recover from early summer harvesting, but that old, established plants can take a season-long harvest. 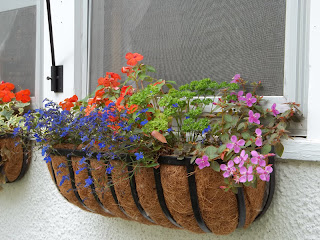 I planted a large pot with a tomato, which is just doing so-so, and some basil and marigolds and thyme, and next to it another pot with some more thyme and marigolds, and a dill. I also included a couple of parsley plants in my kitchen window baskets, which I can harvest through the window when I want a sprig. 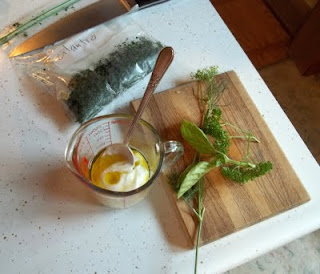 I especially like to use the fresh herbs to make my favorite summer salad dressing—a large dollop of plain yogurt with enough olive oil to thin it to a just-pourable consistency, then chopped fresh herbs and a bit of salt and pepper (I also include some cilantro from the farmers market, but since they sell it in a rather large bunch, I froze most of it and use the frozen herb just like fresh ones). It's delicious on sliced cucumbers, too!
Posted by Sharon Parker at 11:52 AM