Hydrangeas are for butterflies, too 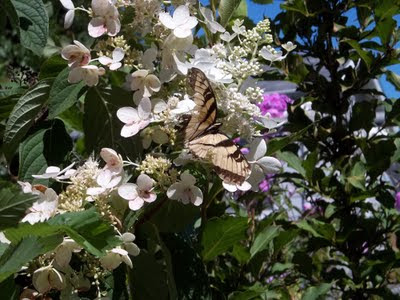 I hadn't really thought of hydrangeas as a butterfly shrub, and I don't recall noticing any butterflies on or around the Annabelle hydrangea that grew at our last house. However, it had only been planted just before we moved in there and it didn't really start blooming in its characteristic profusion until last summer, when we moved out.

Still, I was genuinely surprised when I was going for a bike ride about a week or so ago and spotted a tiger swallowtail happily sipping from a panicle hydrangea in an alleyside garden just a block away. The same shrub played host to a small blue butterfly (like the one I had spotted in my yard only a few days before and wrote about here) and several bees. I really like most hydrangeas, but because I believed that they didn't have much wildlife value, I've tried to temper my enthusiasm for them somewhat, wanting to emphasize wildlife-friendly plants in my garden as much as possible. Now I feel like I've just been given the go-ahead (by a butterfly, no less), to add a hydrangea or two to my landscape plans.

But the one kind of hydrangea I have not so much cared for are the Endless Summer macrophyllas and their mophead kin. They were introduced by Minnesota's own Bailey nurseries several years ago and received with great enthusiasm because they were the first mopheads that can survive our zone 4 winters. I'll admit that my tendency to be suspicious of anything that's too trendy may have somewhat influenced my tepid response to these popular flowers. But it's more than that. Try as I did to appreciate them, I just found them to be a bit too artificial looking for my taste; and I don't like the extra fussiness of tinkering with the soil pH through the use of various additives (most commonly aluminum sulphate) required to get the intense blue color that makes them so popular. 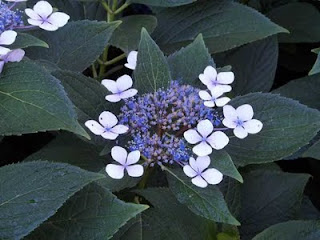 I don't know whether Endless Summer appeals to butterflies, but I do know that the more showy flowers are the ones that are not fertile, so they have no reason to offer nectar to entice pollinators. The kind of hydrangeas that have both the showy flowers and the nonshowy fertile ones (which tend to look like little buds, either clustered in the center, like in the lacecap above, or mixed among the nonfertile blooms, as in the panicle at top), are more likely to offer something for the butterflies. (I admit, I'm speculating here, but it stands to reason, doesn't it?)

I photographed the blue lacecap, above, at a bed and breakfast in Ludington, Michigan, last week when we took a road trip up and around the top of Lake Michigan after bringing our daughter, Nora, to college in Albion. I love the pale blue of the outer florets paired with the deep indigo blue of the small fertile flowers in the center, and was thinking that it would sure be nice if I could grow a hydrangea like that at home. But most of Michigan is in a much milder climate zone than Minneapolis. So, imagine my surprise when I learned that one of the newer introductions in the Endless Summer series, called Twist and Shout, looks just like that!

I'm still considering the different panicle hydrangeas and haven't decided which one I'll plant, or where. But now it looks like I may end up with an Endless Summer hydrangea as well, once I find out whether their soil pH preferences match up with my front yard, where two overgrown fir trees (slated to be removed this winter) have been dropping their needles for a few decades (which may have acidified the soil).

Posted by Sharon Parker at 4:14 PM