Flowers in the House, a little late 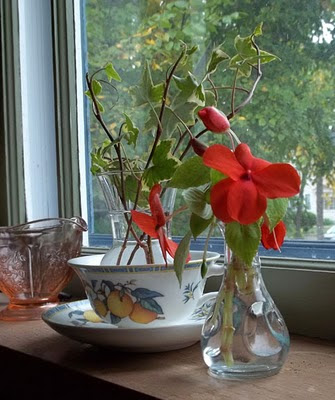 I've been meaning to join the monthly Flowers in the House blog tour, but I haven't quite got the hang of when to expect it (it looks like it may be the last Monday of the month?), so after admiring the many lovely contributions this afternoon while at the coffee shop, I hurried home to gather a couple of bouquets and jump in.

Except first I had to run to the co-op to pick up some things for dinner, and then feed the pets, and then get the rice started and the squash in the oven ...

Hence, my rather meager contribution. I hope to do better next time, except late October in Minnesota is not a particularly bountiful time for fresh local flowers, but, who knows? We may be enjoying a lingering mild autumn at this time next month.

The orange impatiens are trimmings from my kitchen window baskets, which were in need of a bit of rejuvenation since their midsummer peak. I had considered simply pulling them out altogether, since I don't think impatiens tolerate any frost at all, but then I realized we may yet get that lingering mild autumn and perhaps they'll perk up a bit, so I trimmed them back to encourage them to give it the old college try. The ivy cuttings are from the window baskets, too. 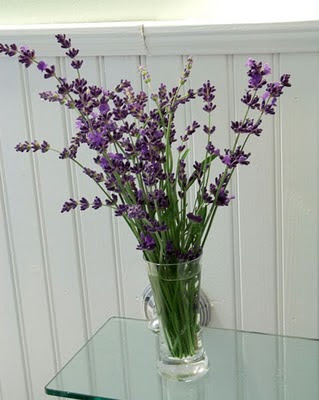 And when I saw someone else's lavender in the bathroom (so sorry, now I can't find which one that was!), I thought it was such a lovely idea that I would just be a shameless copycat and do the same! My lavender is the English Munstead variety, which might survive our Minnesota winters, and I dearly hope it does because I would love to keep it going for many years.

So, that's my small and hasty contribution to Flowers in the House! Thanks for stopping by.
Posted by Sharon Parker at 6:19 PM