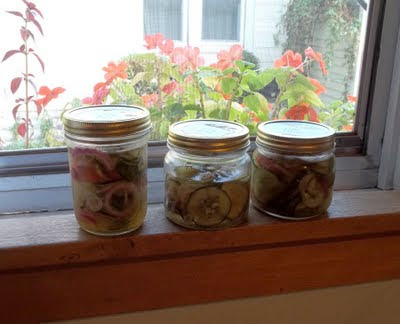 Many years ago, when my mother-in-law, Ruth Cox, was still living, I brought her some cucumbers from my garden and she made them into crisp, sweet, refrigerator pickles, and they were yummy. I've since learned that it must have been a tradition from the Scandinavian side of the family; I've had similar sweet cucumber pickles at the Swedish Institute, served alongside Swedish meatballs and potatoes, and at the Minnesota History Center on Sittende Mai, or Norwegian Independence Day.

I asked for the recipe and made them a couple of times since. I enjoy bringing them to my sister-in-law's house during the holidays—bringing something made from her mother's recipe feels just so, you know, nostalgic and all that, and they do complement the array of foods, both traditional and new, that other family members bring to share.

So when two of our neighbors gifted us with cucumbers from their gardens, I naturally pulled out Ruth's refrigerator pickle recipe again. Reminded that the recipe includes onions and bell peppers, I happily traipsed off to the Midtown Farmers' Market to add to the bounty. But it didn't occur to me to check my supply of sugar before starting, and when the vegetables had had their hour or so with the salt and spices and were ready to be bottled up with the vinegar-and-sugar syrup, I found that I was a half cup shy of the two cups of sugar it called for, to be dissolved into one cup of white vinegar and poured over the cucumber medley.

I spent some time searching for the sugar bowl, hoping it had a half cup of sugar in it, only to finally discover that it had been washed and returned to the buffet some time ago. So I went ahead and made the pickles with what I had, reasoning that the amount of sugar probably isn't essential for preserving the pickles, since the vinegar is undiluted and the jars are stored in the refrigerator.

And when I sampled them after they had chilled an hour or so, I discovered that I rather like them a little less sweet. They're still sweet, but now they have a bit more tartness as well. I'm pretty sure Ruth wouldn't mind. Don't all hand-me-down recipes evolve a little from one generation to the next?
Posted by Sharon Parker at 5:00 PM