Flowers in the house didn't happen this month, apparently because of everyone's preoccupation with flour of a different sort and a certain feasting holiday. I would have been late to the party anyway, for much the same reason.

Still, I have found the monthly floral blog crawl to be a nice motivator to do some sort of botanical arrangement in my house, as well as an opportunity to feast my eyes on and be inspired by the floral and artistic talents of the other participants, so I paid a visit to a local florist and made a couple of arrangements anyway.

My son's apartment is just one block from Roger Beck Florist, so when I dropped him off yesterday after he was done borrowing the car, I stopped in. I picked up a disparate assortment of elements, and I think the nice fellow helping me had his understandable doubts about their combining into a pleasing display, because I intended to supplement them with what I could find still in my yard and garden. 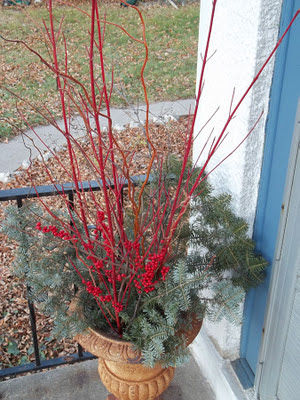 In fact, when I got home and started playing around with the blue and white mop head hydrangea, sprig of rose hips, purple seeded eucalyptus, tall green-purple foliage thingy (protea, maybe?), and branch of curly willow, I quickly surmised that they weren't all going to go together no matter what else I introduced into the mix.

So I added the willow to my existing front step urn.


The rose hips and mystery foliage branch, plus a few more quirky black orbs from the black-eyed Susans in my yard, helped fill out the small gilded pail in my front porch, which I had filled with sand to hold the cuttings from the too-long dogwood when I made the front step urn display.

For the indoor display, I cut a whole bunch of lavender from the back garden, which was still looking perky and smelling wonderful, and several tangly leafy stems of the autumn clematis, which appears to be largely undaunted by the several frosts we've had so far.

The hydrangea proved a disappointment, since it had wilted by this morning, so into the compost it went. I had cut the stem and put it in fresh water, so I'm not sure what the problem was. I will admit the mop heads are not my favorite hydrangeas, I much prefer our native Annabel and the panicles and lacecaps. Maybe it knew I didn't think much of it and went into a sulk. 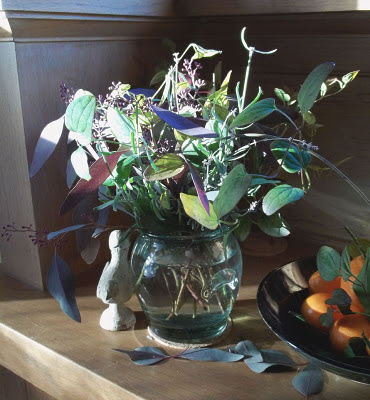 The resulting arrangement is all foliage and no flowers, but I rather like it. The afternoon sunlight was a bit harsh when I took this photo, but when the sun isn't shining in on this spot, it's too dark to photograph it at all. Maybe next time I want to photograph something on the buffet we'll have a cloudy day, and then the afternoon light will be just right.
Posted by Sharon Parker at 5:03 PM 3 comments:

In the Middle of Everywhere, U.S. 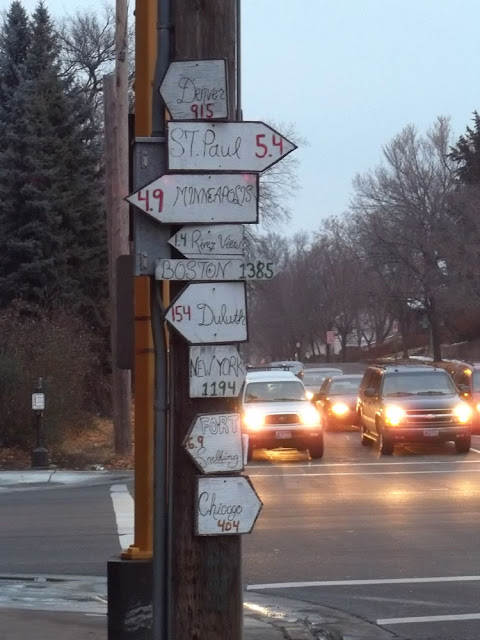 At the corner of Cretin and Marshall in St. Paul, Minnesota.
(Teachers and homeschoolers take note: Wouldn't this make a fabulous geography project? Add seeking permission to use the city's light pole, and you've got civics in the mix. A variation on this concept: the community solar system.)
Posted by Sharon Parker at 12:02 PM 1 comment:

Yet another beautiful mild sunny day in Minneapolis. I'm experiencing something akin to spring fever, but with a twist: I feel drawn to the outdoors even when I have things I need to do indoors (that's the part that's like spring fever), but with even more compulsion, because we are headed not to summer, but to a Minnesota winter.

On my not-quite-daily walks with Brigit, I usually head to the mailbox to drop in a postcard or two for my Postcrossing exchange. The round trip is about 2/3 of a mile (1 km), just right for an old dog, and for me, too. I tend to be somewhat purposeful when I walk or ride my bike—I need a destination to motivate myself. So when I don't have anything to mail, I'm not so likely to get out for a walk. Hence, the Postcrossing hook.

I like my neighborhood and its mix of natural areas along the Mississippi River and Minnehaha Falls, and its small residential gardens and houses. Most of this area was built up in the 1920s after the Ford plant opened across the river in St. Paul, and the Intercity bridge, known informally as the Ford bridge, was built. Soon workers at the Ford plant were building modest Craftsman bungalows to live in, just a short commute from work, and the Longfellow neighborhood was born. 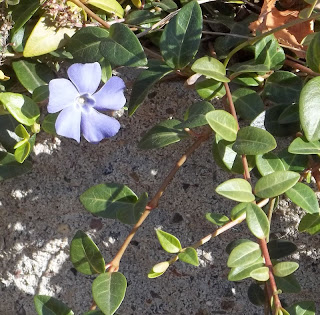 Some of those bungalows now have sweet gardens and I enjoy varying my route from time to time to change the view. With this lingering autumn, there's often still plenty of green and even an occasional blossom, especially with cold-tolerant flowers like this lovely little periwinkle tumbling over a garden wall.


Today I turned up a different street than usual and discovered a second pensive gargoyle in the neighborhood, sitting in a less abundant garden than the first (shown in this post, also about my walk to the mailbox), but still in an attractive setting. 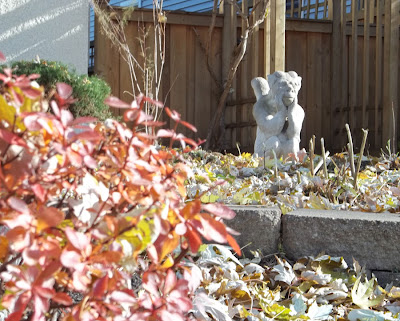 A few jack-o-lanterns still sitting on front stoops have that weary after-the-party look. 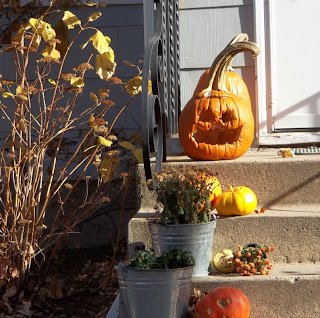 Although most of the trees and shrubs are bare, some colorful leaves are still hanging on. 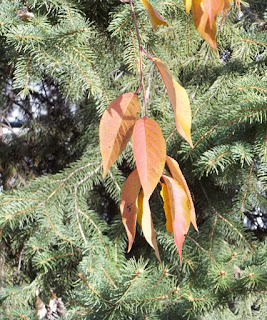 And back in my own garden, where, on Sunday, we finally raked our leaves off the lawn and onto the gardens, a couple of cheerful violets peak through the debris. 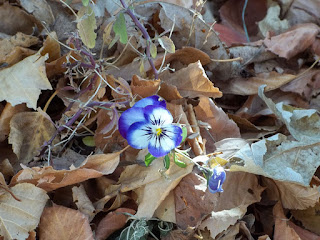 Posted by Sharon Parker at 3:02 PM No comments:

Sounds Heard on a Walk

On a recent walk with my dog, Brigit, I heard a woman talking on the phone, kind of loudly, sounding like she was engaged in a bit of an argument; then I saw her leaning against her fence, seemingly oblivious to our presence as we walked by. Her voice faded away gradually as we made our way up the street.

The next day, as we walked the same route, and passed the same house, there she was again in the same spot, with her phone, sounding like she was having the same argument as the day before. It was as if she had never left that spot or stopped talking.

On another block along our regular route, there is a dog hidden from view by a solid wood fence. It knows when we are passing by, and barks a steady staccato rhythm until we are well past. It sounds like it's actually saying the word bark.