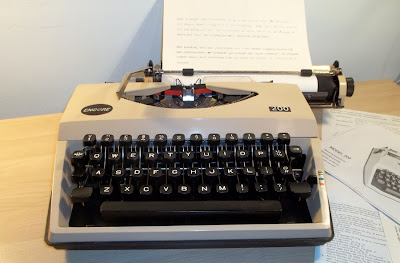 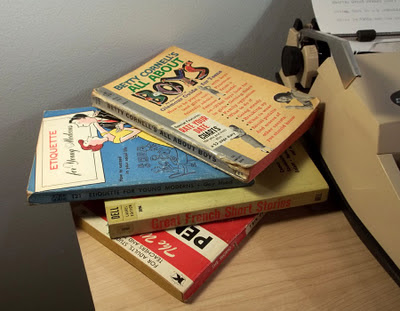 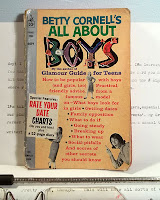 Okay, I was going to do this whole blog post with photos of the text typed onto paper with the typewriter I just bought at an estate sale today (you got that, right?), but I think it's going to be too hard to read and you'll just give up, so: besides the typewriter, I bought these four paperback books. I brought the books in to show the girls at Three Tiers bakery, and they seemed to especially like the "Rate Your Date" charts in All About Boys (published in 1958). 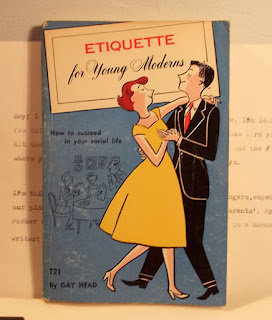 This copy of Etiquette for Young Moderns,  first published in 1954, was in its fourth printing in 1961. The author is Gay Head, a pseudonym for Margaret Hauser, who wrote advice articles for Scholastic (also the publisher of this book). Frankly, I'm disappointed Gay Head wasn't a man. 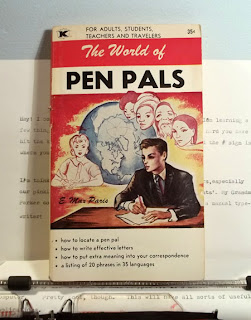 The World of Pen Pals, from Dawn Publishing (1961) offers advice on finding a pen pal and how to write interesting letters, encouraging the would-be correspondent to begin their letter with a first sentence that is "bright, interesting, sparkling, attractive and to the point." Like: "What a treat to receive your letter," or "Your handwriting thrills me."
It's actually rather a sweet and high-minded book, encouraging its readers to "Promote Pen Pals for Peace": "If you agree that writing to pen pals can help people around the world to become friendly with each other, and thus promote peace ... you should try to interest other people in the activity." 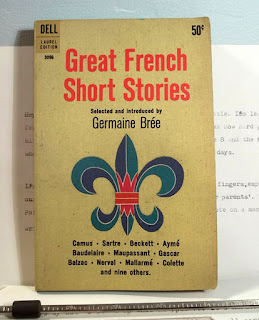 And this book of Great French Short Stories (Dell, 1960) has a note tucked inside of it dated June 1, 1966, with the book title and "Reaction to book" followed by lots of blank space, and on the back of the note, "Write summary," followed by more blank space. Looks like somebody didn't do their homework.
I also picked up an old dictionary. I like to use parts of the pages or individual definitions in artwork sometimes, although I also think it's interesting to see how words and definitions have changed. More on that in another post (I'll find some interesting examples).
And a bingo game. I know people who like to use bingo cards in mixed media art, and the little wooden markers can be cool. (I thought it had only the plain markers shown in this photo, but later I found the red-letter-&-number ones inside that red box. A happy discovery.) Overall, I'd call it a pretty successful estate sale outing. 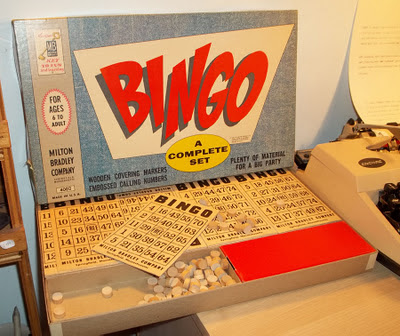 Posted by Sharon Parker at 1:42 AM No comments: 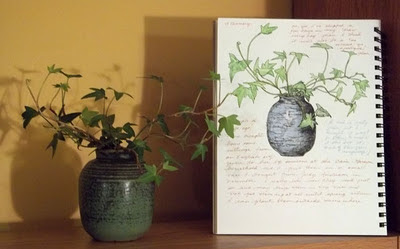 I can't say how many years I've started out with the intention to draw every day and never got much beyond good intentions. But it still strikes me as a worthy challenge to give myself, so here I go again. I didn't start this time until January 7, and I've already skipped a few days, but at least I'm drawing more than I have in a long time, and that's really the whole point of the exercise. My motto this time around: No excuses, no apologies, no guilt!

I think one of the things that has stopped me before is choosing a time and place for drawing. So far this year, in acknowledgement of my night-owl ways, I have done them while sitting in my favorite chair in the living room, late at night after Craig has gone to bed and usually after I've either finished the Sudoku or gotten stumped by it. 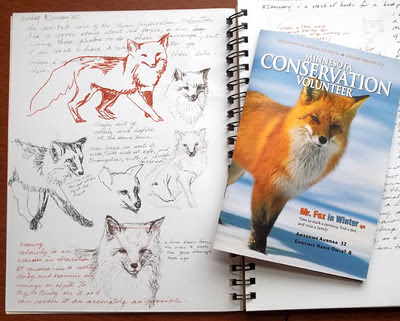 I also decided to use a medium-sized sketchbook (8.5 by 11 inches), which is small enough to be easily managed, and large enough to let me play around on the page and write a few notes and such. Using an ordinary sketchbook of good quality (the Canadian sketchbook brand) and not a "journal" also helps, I think. The book and paper aren't so nice that I feel intimidated by it, but it's still nice enough to be a pleasure to work on.

I also made a list of prompts, which I haven't felt the need to consult, because just writing down some ideas has helped, and sitting in my chair helps, too, because I do try to surround myself with items I find appealing. 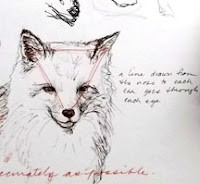 The newest issue of Conservation magazine, published by the Minnesota Department of Natural Resources (MnDNR), featured a cover story about foxes, with lots of nice photos. This, right after I saw on the Etsy merchandising blog that foxes are "trending," whatever that means. 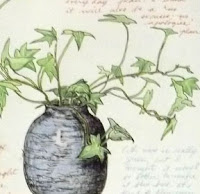 A few days ago, Nora brought home a few cuttings from an ivy plant she was given by a relative of her current employer/client (she's working as a personal care attendant, or PCA), and I put them in a vase I bought last month from my friend Judy Anderson (aka Dragonfly Guild). I've been really enjoying the way the wiry stems extend from the vase, so last night I drew that, first sketching lightly in pencil, then finishing in ink, then deciding to add some color with watercolor pencils. 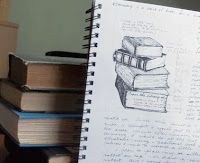 Using this practice to flesh out ideas for projects is a good way to keep me at it, too. So after a woman contacted me via my Etsy page to suggest that I consider making bookplates, I have been thinking about and sketching some ideas for a design. 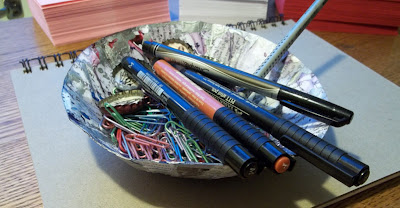 On a forum of local Etsy sellers recently, a colleague posted the question, What do you do to get unstuck? She was contending with having many ideas and inspirations for projects, but finding she kept getting distracted and was having trouble getting at any of them. 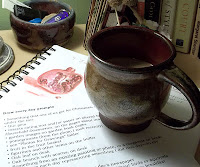 I welcomed the topic because I often find myself there, too. So I took the opportunity to think through what sometimes works for me and post a response. Just doing that is helpful, of course!
When my work space is messy, everything seems overwhelming and it's hard to organize my time or anything else, so often I will start there. Once my desk/table/art room is at least somewhat tidy, I feel more ready to tackle some tasks.
The next thing I like to do is make myself a cup of tea or coffee and sit down to prioritize, using a few criteria:
• What is most timely?
• What can be accomplished with materials I already have on hand?
• What will take the least amount of time and effort to complete? The satisfaction of finishing something often sweeps away some of the mental/emotional clutter and helps me to move on to the next thing. 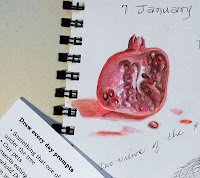 • What do I feel the strongest urge to work on? Sometimes, I feel a strong desire to work on a new idea even though it's not the easiest one to complete or the most timely, and I may think I must finish other projects before I can start on the one I really want to do, and so everything feels like an obstacle. If that is the case, I think if I could just ignore those other “shoulds” and throw myself into that wild impractical thing that is tugging at me so fiercely, I would probably make meaningful progress. I rarely give myself permission to do this, though.
And, of course, it's all much easier to say than do!
Posted by Sharon Parker at 9:30 PM No comments: 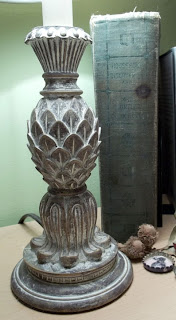 Visiting an estate sale is like walking into a house-sized cabinet of curiosities all focused on the life of a particular person, which is why I so enjoy them. I especially enjoy looking through the books a person leaves behind. I think books—as a collection—suggest so much about their former owner. 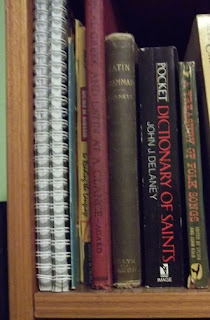 One that I visited last fall in a rather grand house had dozens of books about Catholicism (I bought a Pocket Dictionary of Saints there), alongside about as many about various forms of New Age spirituality and mysticism, another batch on philosophy, and many popular histories. I tried to imagine what fascinating dinner party conversations they might have had in their large well-appointed dining room.

Some households have few books for sale, and I'm left to wonder whether the people had little interest in them or if the family valued the books enough to keep them all.

Some have mostly practical books—cookbooks and how-to's—which can be quite fascinating if they're old enough to provide insights into how things were done in a low-tech do-it-yourself age.

So I was delighted when I came across this practical tome a couple of months ago. The woman was letting go of some of her mother's old things that she had been keeping for some time, including this book, Household Discoveries: An Encyclopedia of Practical Recipes and Processes, dated 1909. It even has a chapter on how to make your own paints and varnishes. 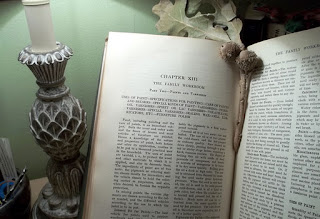 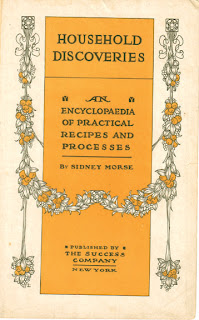 The other appeal of such old books is, of course, aesthetic. Some have beautiful graphics, like the above-mentioned book's title page, and lovely tooled and embossed covers. Even those that aren't especially beautiful have a certain charm, with their period typography and yellowed pages. If I am certain that an old book is not particularly rare or valuable, and if its content is not all that special, I'll even consider using pages for some craftsmanship of my own. I am not a book artist in the fine art sense—not to the level and skill of some who have done wonderfully intricate and ornate sculptural carvings from books—but I will alter a book or use book pages in art sometimes.

Just so, the chapter in Household Discoveries on dealing with pests is just too rich to leave untouched. And since I had carved a rubber block into a rat image a couple of years ago when it was year of the rat, I couldn't resist doing a little printmaking on the pages that offer rather macabre ways to deal with rats and mice (and which had me feeling quite sorry for the poor rodents). Three such prints that are trading card size (2 1/2 by 3 1/2 inches) are now for sale in my Etsy shop, and two more full-page ones will be added there soon. If you care to visit the shop, you will find a link just over there, up and to the right. 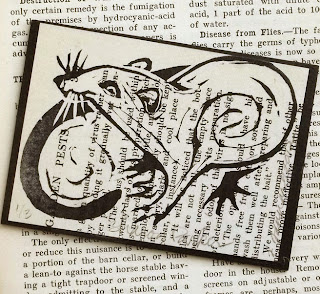 Posted by Sharon Parker at 12:26 AM No comments: