Yellow Flowers in the February House 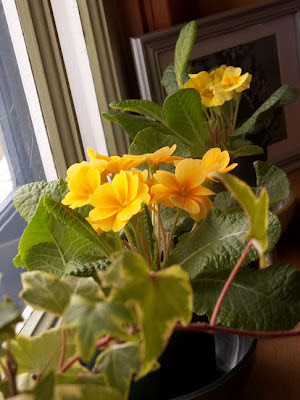 I get so tired of pinks and reds after the winter holidays, that I find I'm always craving a bit of yellow in late winter, and my favorite late winter/early spring yellow flowers are the primulas, cultivated cousins of the English wildflower known as cowslip (Primula veris). So what a delight that my local co-op, Seward, had a bevy of them from which to choose. Naturally, I brought home two. They're enjoying the soft light that comes in the north window over the buffet.

So, no stunning bouquets in this house, but a cheery flowering plant instead. To feast your eyes on a delightful parade of lovely flowers in houses, begin your tour at Jane's place.

Oh, but there are also the clover seedlings, still a long way from actually looking like clover, let alone producing flowers.

Yet, they're doing pretty well, considering that there were a few false starts: a too-cold windowsill in the basement followed by a too-dark warm spot near the furnace that got them germinated but anemic; a bit of absent-minded neglect on my part wherein the pale fragile little sprouts withered and died; a new beginning in the sunny south windows by Craig's desk; and a too-curious cat bringing my four pots down to two. 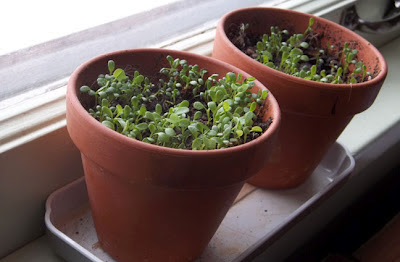 But here they are, the sweet little things, even beginning to show their first true leaves. Will they look like jaunty Irish clovers by St. Patrick's Day? Well, we have almost three weeks to go, so maybe they will.

Why clover and not "shamrocks" you ask? More on that later.
Posted by Sharon Parker at 11:24 AM