Growin' of the Green 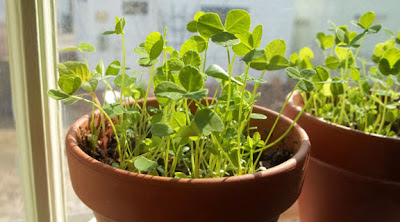 I started some clover seeds in pots about six weeks or so ago,  hoping to have a pretty display of cheerful shamrocks on St. Patrick's Day, but after a couple of setbacks, they really only got started four weeks ago. So I'm happy they've come as far along as they have.

You may think it odd, or that I am mistaken, to call this plant, the common lawn weed Trifolium repens or Dutch white clover, a shamrock. But it is far more likely that this little weed is the true Irish shamrock than is the showy oxalis sold at florists and grocery stores this time of year.

To begin with, there is no actual shamrock plant; shamrock is simply an Anglicized spelling of seamrog, meaning "little clover" in Irish.

Back in 1893, Irish naturalist Nathanial Colgan asked people throughout Ireland to send him a sample of the plant they believed to be the true Irish shamrock, and the overwhelming majority sent him T. repens. Charles Nelson conducted a similar survey in 1988, and found T. repens to be second runner up to another clover, T. dubium, or lesser trefoil. (46% for T. dubium vs 35% for T. repens, as reported by the BBC in 2004)

The plants generally sold as shamrocks in the United States are a type of oxalis, and likely would not be recognized by an Irish visitor at all!
Posted by Sharon Parker at 9:00 AM