Flowers Out of the House and into the Window Basket 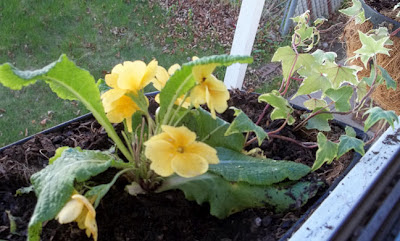 I missed the flowers in the house tour last month, for reasons that I can no longer remember, but now that I'm getting a few flowers going outside of the house, I'm feeling some floral momentum. And these primrose yellow primulas are certainly worth a bit of celebration! I bought them back in February as houseplants to provide a bright spot in the drabby midst of winter and did not expect them to have much left to show for themselves come spring, and yet they are still blooming! One of the plants had, in fact, finished, then recently started again, the other has been a continuous bloomer. I don't recall them ever lasting this long. 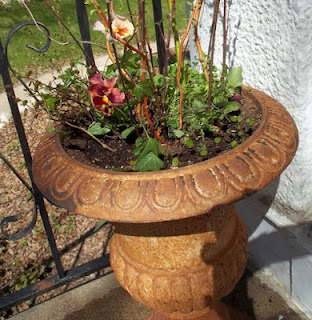 I had set one, pot and all, in the front step urn amid the willow and dogwood twigs from my winter display, just to add a spot of color until I could get around to planting it up proper. That's on the west side of the house, and its leaves got a bit burned, so, since it has been blooming happily in a north window for several weeks now, I planted it in the kitchen window basket, which is on the north side.

There are two windows, and so two baskets. One now has the two primulas, some English ivy, rooted from cuttings from last year's basket, and a chive plant in the center. The other has pansies and ivy and the Muehlenbeckia, or wire vine, which I bring in every fall and then try desperately to keep the cats from devouring. I barely succeeded again this year, but now that it's safely outdoors, it should thrive once again. It has sweet little round leaves on wiry stems. I'll share a picture when it recovers a bit from its winter ordeal.

The urn doesn't look like much yet, but the pansies should start putting out more blossoms once their roots have nestled in. Also in the urn: the Dutch white clover that I had grown indoors for St. Patrick's Day. I figured, why not? I think it's sweet, and I thought it would fill in around everything and be like a little green-and-white carpet.

Some of the willow and dogwood branches are sprouting leaves, kind of a fun bonus from having them in moist sand for so long. After I took everything out and replaced the sand with soil, I re-planted the more attractive of the twigs, and noticed that the dogwood stem even has flower buds on it. What fun!

I've been meaning to plant these two spots for some time, and feeling as if I am a bit late to the garden party. But then I remember that planting anything outdoors so early in April is indeed unusual in Minnesota!
Posted by Sharon Parker at 5:15 PM