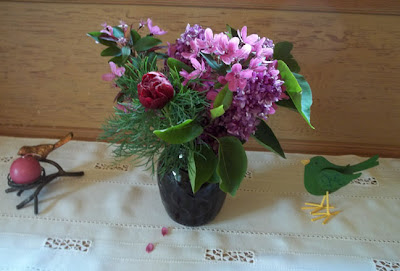 In a normal year, April 30 would be the middle of spring, but this year it's late spring. Likewise, I'm a bit late to Jane's flower party — nothing unusual there, however.

The lilacs have been blooming since Easter, and I was a little worried that that would mean no lilacs in May, but my neighbor's fragrant blooms reaching over the fence are mostly still looking lovely, though showing their age; so, yes, I believe there's time for one more lilac bouquet.

The purple ones I paired with the one fernleaf peony that's almost ready to open, and a couple of crabapple stems, discretely cut from the tree we just planted last spring, and which is blooming quite abundantly for its first spring in the ground, as you can see. 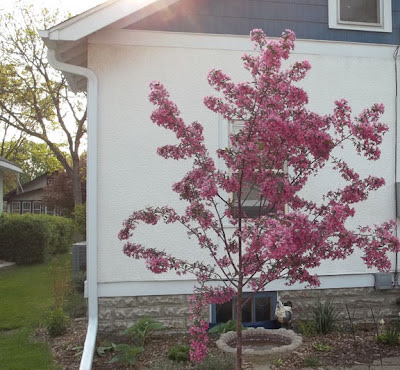 And the white ones were arching over a rogue amur maple volunteer, so I thought, why not? And white is such a good color to set off this little blue glass vintage pitcher I just picked up at an estate sale on Friday. The company name is Rainbow, but so far I haven't been able to find out much about it, except that somebody is selling an identical one for $18 and I bought this for $3. Don't you love it when that happens? 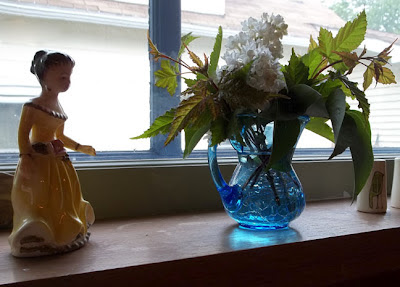 That's Julia to the left of the white lilacs, btw. She came from the estate sale that was held at this house right before we closed on the purchase. I named her for the lady of the house before me. 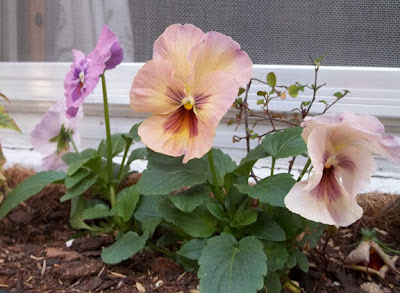 As for flowers on the house, the pansies outside the kitchen window are sure enjoying this cool weather.

That's all for now, though I just might gather a dandelion bouquet later in the week — I've got a bountiful supply. What would you pair dandelions with in an arrangement? 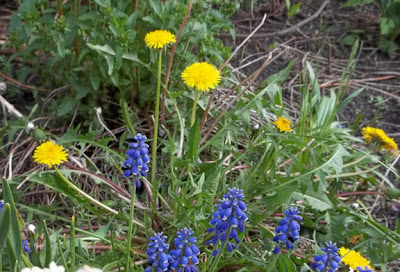 Posted by Sharon Parker at 6:16 PM