Before the storm hits ... 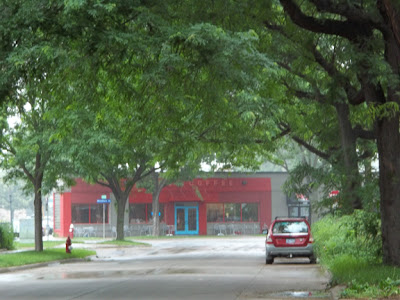 I wanted to get out on my bike for a little ride, and was pretty confident the predicted thunderstorms wouldn't reach us before 3ish, so I took my library book and a plastic bag to protect it and headed off to nowhere in particular, thinking I might just go for a little ride and back home, or I might go for a coffee and take my chances.

There are a few coffee shops about a mile from my house in different directions, but my favorite these days is Peace Coffee, which is a bit more than two miles. By the time it started to rain and I thought maybe I should be a bit more cautious and stay closer to home, I had passed the Riverview Cafe by several blocks and was well on my way to Peace Coffee. So I figured, what the heck.

It was still mostly a misty kind of rain when I got there. I ordered a large latte, hoping this was not the beginning of hours of increasingly intense rains. 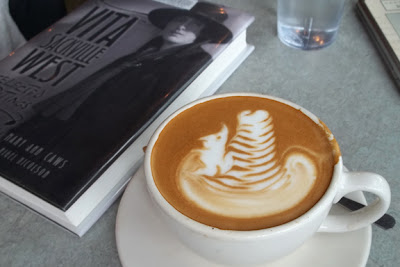 The barista said, "Look, I made you a squirrel."

After nearly an hour with my squirrel latte and Vita Sackville-West traveling in Italy — ... Then to the Pineta, where we were extremely arty: left the motor and went into the wood, and lay under the pines, and read snatches of the more obscure poets to one another. ... *— I noticed that it wasn't raining and decided I had pushed my luck far enough and so headed home to harvest peas from the garden just as the next round of rain was getting underway. 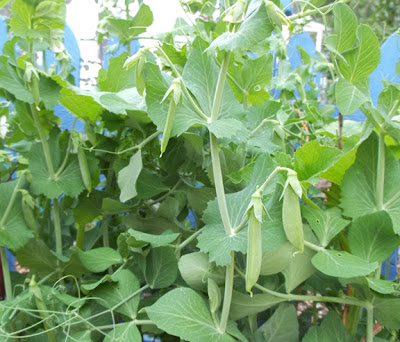 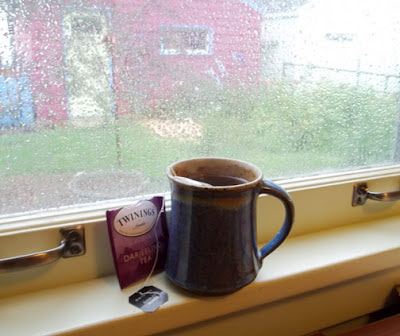 I have read about how a smell or flavor can trigger a memory response, and I have occasionally experienced it, but as it's not something one can really ever anticipate, it's always a bit of a surprise.

So. About this cup of tea.

I had this idea to make some sort of little booklet that would be small enough to fit inside those packets that tea bags come in. I thought I would stitch them with a three-hole pamphlet stitch, with the tail to the outside, and attach a little tab to the tail so that you could pull the booklet out of the packet just like you do a tea bag. 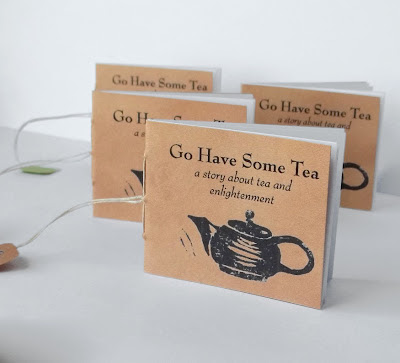 Naturally, the booklet needed to be about tea. But how so? A collection of quotations about tea seemed too obvious and, besides, it's been done.

I started doing a little research on the history of tea, which led to many interesting ideas, all of them a bit too involved for the tiny booklet I had in mind.

Then I came across a little story that I dubbed a tea koan. Like a koan, it poses a question to which there is no clear answer, but, unlike the typical koan, it's not so obtuse as the sound of one hand clapping. 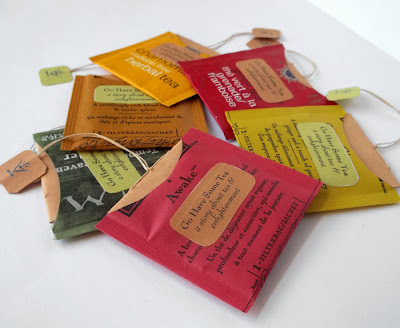 Having found my story, I made my booklets, and I inserted them into a variety of tea packets that I had been saving, and I listed them for sale in my Etsy shop. A few of them were also accepted by the Minnesota Center for Book Arts to sell in their gift shop.

Recently, a woman who purchased one of them from my Etsy shop asked if I had a Darjeeling tea packet I could put it in. I did not, because I haven't had Darjeeling tea since maybe the 1980s, after which I developed a taste for the stronger Assams and such.

Ever eager to please, though, I went out and bought some Darjeeling tea, made myself a cup, and saved the packet for her booklet. And a funny thing happened when I stirred a little honey and milk into my tea and took a sip: I was, ever so fleetingly, sent back to college, where I drank Darjeeling tea with the man I would eventually marry, and to whom I've been married for over 32 years now. 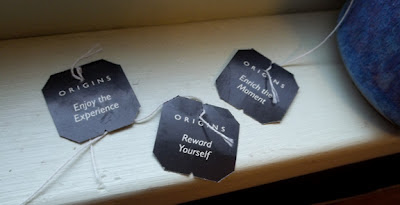 Posted by Sharon Parker at 9:44 PM No comments: