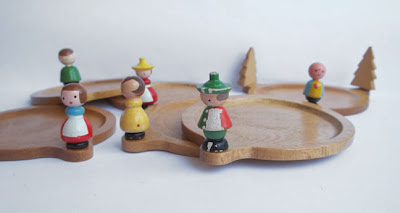 On one of my estate sale expeditions earlier this summer, I came across a charming set of coasters with little figures attached, and I thought I could remove the little wooden figures to use in the random toy sets I assemble.  But before taking them apart, I wanted to find out if they were valuable. Besides, I enjoy learning the stories behind vintage objects that I find. 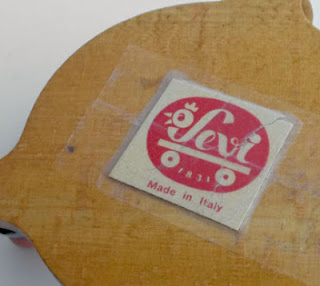 There was no label or logo on the coasters themselves, but they were in a falling-apart box bearing the name Sevi, the year 1831, and the phrase "made in Italy." I cut the logo out and taped it to the bottom coaster for future reference.

As so often happens when I start to search something online, I came across numerous sources offering the same information with pretty much identical wording, such as this: "The Italian toy company Sevi, founded in 1831, is the oldest European toy manufacturer." These companies (Nutwood Toys, My Sweet Muffin, and Rainbow Puppen, for example) were selling various Sevi wooden toys, but none were selling coasters. It became apparent that the toys were still being made (those sites were not selling vintage Sevi toys), but not in Italy (some said "designed in Italy" and some admitted they were made in China, but insisted that strict quality standards and safety were followed).

A bit of persistence and much tweaking of my search terms later and I came upon a Wikipedia page on wooden trains, which mentioned Sevi briefly and actually provided a link back to the company website. 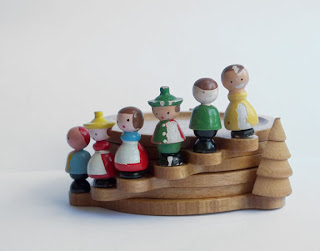 The company modestly claims to only "probably" be Europe's oldest toy maker. It was founded in 1831, by an Italian wood carver named Josef Anton Senoner, who coined the company name from his son's, Senoner Vincenz (I suppose he switched the name around because Vise doesn't sound nearly as charming, even in Italian; a few of the above companies confused the son's name with that of the founder).

The Senoner family lived in the Val Gardena, which is a valley in the Italian Alps that was known for its skilled wood carvers, who carved religious figures for Catholic churches throughout Europe and also made peg wooden dolls, rather like the figures on my coasters, that later came to be known as Dutch dolls.

The company made a variety of wooden toys at its factory in Italy up until the 1970s, when they began outsourcing the work. They've continued to develop and introduce new items and have maintained a reputation for quality, even after they were acquired by the Trudi company in 1998.

But I never found any reference to coasters, not even someone trying to sell them on eBay for an outrageous sum (or at all), so I had no qualms about taking them apart to use the little figures after all. 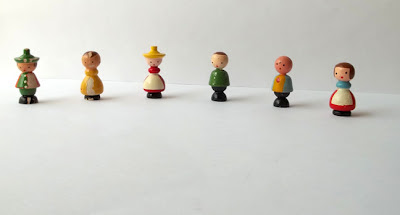 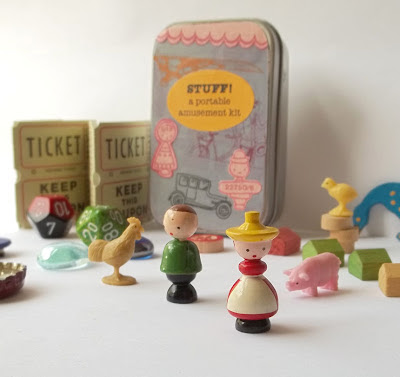 Posted by Sharon Parker at 3:15 PM