"Strawberries do not travel well," says the English gardening website Garden Action, after claiming that most strawberries found in stores in the UK, "have been grown abroad and transported all the way from the Canary Islands to England."

Ah, but England has farmers' markets, and a good many of them right in London, and on our first full day here, we walked to the Islington Farmers' Market and bought, among other things, some good English strawberries from Eden Farms, an organic grower located on the Lincolnshire Fens. These will pair well with creamy organic yogurt from The People's Supermarket for our breakfast in the morning. With both a food co-op and farmers' market so handy, we are well-provisioned to greet the day with happily fortified tummies. 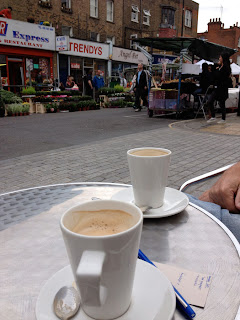 Since we rented a flat for our 10-day stay here, we planned to prepare many of our own meals not only to save money, but because we have found, when traveling, that eating out begins to lose its appeal when you have no other options.

But after we arrived at the market having passed several attractive pubs and cafés along the way, and sat down at an outdoor coffee shop to savor a latte while watching the passing scene and discuss our meal plans, I surmised that we really weren't going to want to spend much time cooking and washing up when there is so much to savor in this magnificent city. So I suggested that we only plan to eat breakfast and an evening snack at the flat, and was pleased that my husband needed no arm-twisting to agree.

The Islington market sprawls across the length of Chapel Market, a street that we would say is about two blocks long (even though I know the word "block" isn't used in the same way here). At the first part, near Penton Street, are the local and organic growers, then as you walk along a ways, it gets more wide-ranging until it turns into a general flea market, with vendors selling shoes, pictures, and assorted items. We walked through about 3/4 of the market and then turned back, confident that what we wanted would be found at the Penton Street end.

So we bought a round loaf of crusty bread, cheese, smoked salmon, apples and a cucumber—as well as those very delicious local strawberries.

Posted by Sharon Parker at 5:41 PM