Confessions of a Calendar Nerd 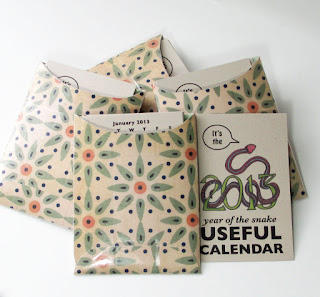 The Useful Calendar has been my annual project for about eight or nine years now (I think the first one was 2005, or else it was a 2006 calendar I made in 2005), and it changes a little every year, both in appearance and content.

I have really come to enjoy the whole process, from researching the dates to drawing the main image, to tweaking the design a little each year, and even the rather tedious task of putting it all together: printing it, cutting the little cards, and assembling them. 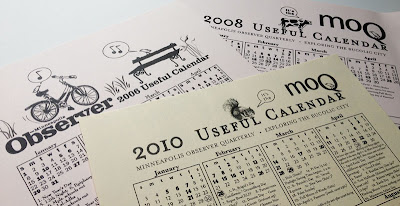 It started out as a simple one-page calendar of national and local observances, which I conceived as a promotional giveaway when my husband, Craig Cox, and I were publishing the Minneapolis Observer.

You've probably received several promotional calendars; sometimes they're kind of cool, but too often they are just too generic and not very useful.

Which brings me to the Useful Calendar. What I wanted — and so extrapolated to everyone else because everyone is just like me, right? — was a calendar that you could look at without having to lift pages to find out when is Easter this year or on what day of the week is the Fourth of July, and things like that. So I designed my own, and endeavored to include all the dates that I thought would be handy to be able to check quickly and easily when making plans of one sort or another. 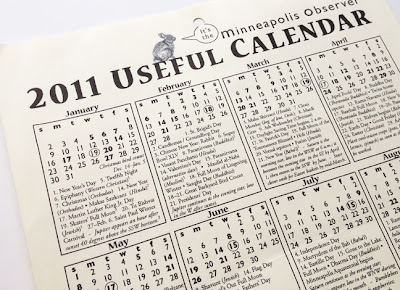 I decided that it should include various cultural observances so that a person planning a luncheon or other food-based get-together could be considerate of their Muslim friends and business associates and avoid scheduling it during Ramadan. Or a ham dinner during the Jewish High Holy Days. Soon I was also researching major Hindu, Buddhist, and Bahá'i holidays, doing my best to ascertain which ones called for some sort of restriction in activities, again so that a non-adherent of those religions could be considerate when planning events.

When we stopped publishing the newspaper and started a little quarterly journal of "the bucolic city" I continued the annual calendar as a gift to subscribers and a promotional item to give away at the Twin Cities Book Festival.

When we stopped publishing the quarterly as well (publications as business enterprises are challenging enough, then you compound that by our lack of business acumen and you get a good formula for going broke in a hurry), I wanted to continue making the Useful Calendar, but it didn't make sense as a promotional giveaway anymore. 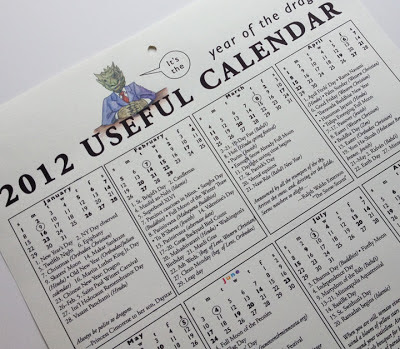 Also, with my obsession over inclusiveness, the little one-page calendar had begun to get a bit crowded, so for 2012, I went to a larger format (11x17); and I also made a second version as a set of cards that could be carried in a purse or pocket. 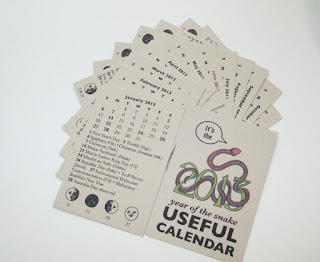 And I started selling them in an online shop on the e-marketplace Etsy.com — Arty Didact.

It has continued to grow and change each year. Since I no longer had a strictly local audience (in fact, most of the calendars last year were purchased by people from all over the country), I changed the calendar's focus for 2013 to be about as inclusive internationally as it has been culturally.

But I hate to disappoint those who are in the Twin Cities area, so I added a Twin Cities Supplement card with those local observances.

Several sets are now for sale in my Arty Didact online shop, and I'll have them with me at the Women's Art Festival on Decmber 15 in Minneapolis, as well.

I expect to have the 11x17 poster version ready in another week or so.

Whichever version you look at, I think you'll still find that it's pretty darn useful. 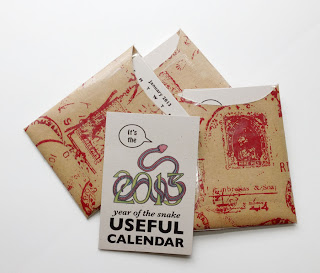 Posted by Sharon Parker at 5:31 PM