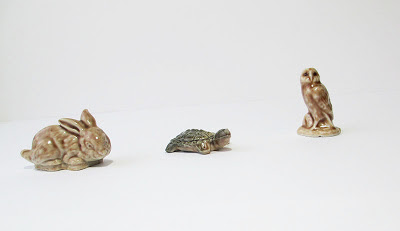 When I once commented to my husband how I marveled at the quantity of stuff some people manage to amass in their lifetimes, as witnessed by the overflowing abundance offered at the estate sales I am fond of attending, he said, "Maybe they liked to go to estate sales."

I take that warning to heart, I really do, and try to limit my estate sale purchases to things I can actually use, especially quirky little items to include in my tins of "Stuff!" for kids, which have become a fairly popular attraction in my Etsy shop (of course you want to pop over to the toy section to see a few examples, right?) 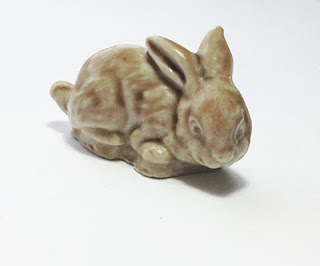 So when I picked up these sweet little ceramic figurines that were scattered amongst the usual clutter and chaos at one recent estate sale, that's what I had in mind. Although I wasn't sure they were quite small enough to fit in the little boxes, which are the same size as an Altoid tin, but at something like a buck apiece, I figured it was worth the risk. 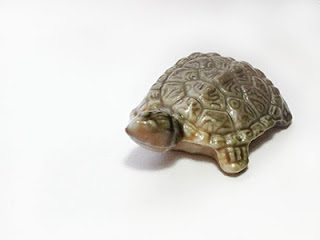 I like to see what I can find out about items like this when I acquire them, so I looked on the bottoms for any clues as to their origin, and found that the turtle had the words "Wade England" on it. The others simply had little ridges. And so I began my search. 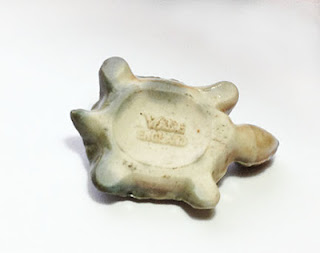 Ceramic figurines like these have been manufactured by Wade Ceramics of England since the 1950s. They are known as Wade Whimsies and are apparently popular collectibles, according to several sources, including the Wade Ceramics website, which promotes a collectors' "club" and continues to manufacture a variety of animals and characters, from Pokemon to Disney characters (according to Wikipedia) to Bette Boop. Their primary market these days is distillers, though; they make ceramic whiskey flagons, too. 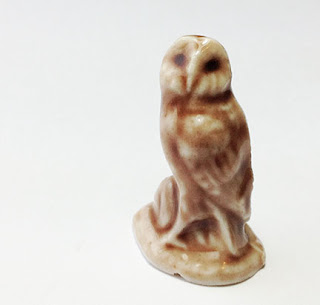 Only the earliest figurines had the "Wade England" stamp on them; soon they started putting the ridged texture on the bottom instead, which became a kind of trademark and also has a practical function—you can strike a match on them. Although it's not clear to me whether that was the intention, they were supposedly used in this way in kitchens and pubs, according to the Red Rose Tea company, which has given away Wade Whimsies in some of their boxes of tea as a promotional item since 1967. 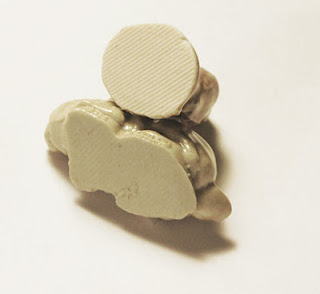 I don't know whether the currently manufactured figurines have this feature, there's probably not a lot of demand for things to strike matches on these days. But it's a novel idea; I may just try it out sometime. Oh, wait—I think our matches are all "strike-on-box" types.

Even though they are considered collectibles, the little figurines are not particularly valuable; at least, not the ones that I have. Some of them are offered for sale online for up to $50, but most are in the $2–$5 range. And I'm not so keen on the cynical world of buying and selling "collectibles" for speculative prices, anyway.

But I still don't know if they'll fit in the little tins because I haven't tried them out yet. I'm kind of inclined to hang onto them.

Posted by Sharon Parker at 9:30 AM