Enjoy, Then Repurpose: Why I Make Journals from Beer Boxes 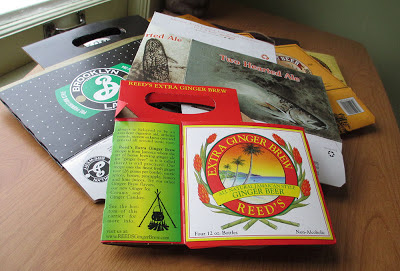 There's something about packaging design that often makes me want to find another purpose for small cardboard boxes, especially certain craft beers and sodas and tea.

It started when the city wouldn't collect the boxes from six-packs of beer for recycling, because the box board is reinforced in such a way as to make recycling difficult. I hated adding those boxes to the waste stream; especially when some of them are works of art, besides. And if they're reinforced, wouldn't that make them especially well-suited to reusing in some way?

So I started using them as covers for small journals and notebooks. Often, I cut a tag from another part of the same box.

My bookbinding knowledge and skills are limited. I really only know a couple of types of stitches: the three-hole pamphlet stitch and the chain or coptic stitch. But these, as it happens, are well-suited to my purpose.

The pamphlet stitch is simple and sturdy, is sewn through the binding (hence useful for a folded book cover), and can be begun and finished from the outside or inside, allowing you to decide where you want the "tail" to end up. Starting from the inside gives you a fairly smooth spine and hides the ends of the cording amongst the pages.

But starting from the outside gives you a tail on which you can string beads or other ornaments.

You can also adapt the tail to provide a closure for the book by leaving part of it long, then wrapping it around a kind of button (cut from more packaging, in this case), like an old-fashioned envelope with a string closure.

The coptic, or chain stitch, allows for sewing several signatures to a cover without needing the cover to wrap around the spine, which means I can cut two different pieces for the covers without needing to fold them or cover them.


Of course I'm not the only one who likes to repurpose box board and other such materials to make journals and notebooks, there's a whole host of them on Etsy.

Here's one using vintage postcards and an actual button for the string closure:


Here are some beer box notebooks using a stitch I don't know (yet!):

Clearly I'm not the only (or the first) to think of repurposing boxes in this way.

And I do use them myself, as well. I find the covers hold up well even after being tossed into the bottom of my tote time and again. The box board really is quite sturdy.
Posted by Sharon Parker at 4:31 PM 2 comments: