Making your own polish for wood and other things


The little tins of "stuff" that I assemble as quirky amusements for kids usually include a few wooden objects, as do my "respite boxes" for adults.

In order to give these wooden components a nice luster and to  provide a pleasant tactile experience, I have taken to rubbing them with a beeswax-and-oil polish. It's a simple homemade concoction that's quite versatile—you can use it on stones and on your skin, as well—and it's a good way to reuse beeswax candle stumps and bits of beeswax cakes that have become too dry and brittle to use on thread anymore.

I thought I'd share it here for others who, like me, derive some satisfaction from finding a practical reuse for something that would otherwise be discarded.

Expecting to find that the process of making one's own polish is somewhat complicated, I was pleased to come across Amber Dusick's charming blog, where she offered her simple recipe using only two ingredients: oil and beeswax. My adaptation is to use scrap beeswax and whatever oil I have on hand at the time. The first time I made it I used grape seed oil, which resulted in a very green polish. My current batch is made with olive oil, which did not alter the color of the beeswax in any noticeable way. Neither polish changed the color of the wood I rubbed it on, other than to darken it, so I don't think it really matters what oil you use. 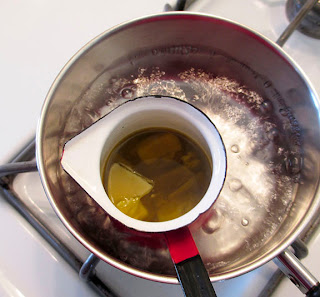 As a frequenter of estate sales, I found a nifty little metal pitcher with a long handle, which seems to be made for just this sort of thing. I put my beeswax bits in it and added olive oil, attempting for a ratio of 2–3 parts oil to one part beeswax; but as I don't actually measure anything, I don't know whether that's quite what I've got here. That's a lot less oil than Amber's ratio, which is 4 parts oil to 1 part beeswax, and I do end up with a rather stiff polish. I'll probably try getting closer to her proportions next time, for a softer polish.


I also don't bother to grate the beeswax as she does, I just break or chop it into chunks. For the small amount of polish that I make at one time (about a half cup), that seems to work just fine. I place the metal pitcher in a pan of water on the stove and let it simmer until all the wax has melted. 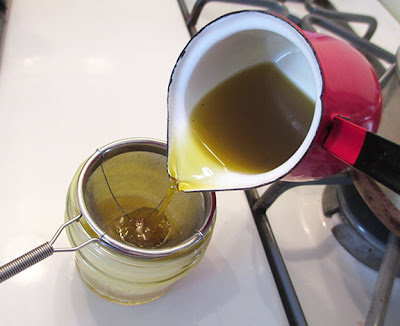 Since the wax has bits of thread in it—and if I were using leftover bits of candles, there would be a wick and that little metal thingy that's in tea lights—I pour it through a tea strainer into a small canning jar.

Then you just let it sit until it cools and sets. The outside will set first, of course, which will insulate the center and keep it from cooling as quickly. 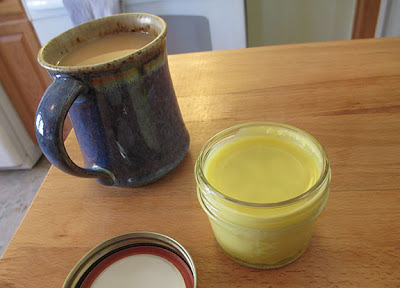 You could go have a cup of tea and read the paper while you wait for the rest of it to cool, I suppose. 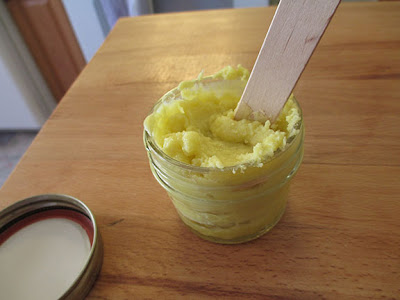 Or, if you're impatient like me, you can stir it to speed the setting process. 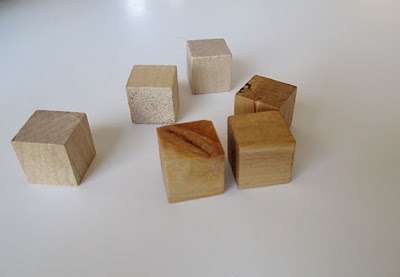 Here are a few wooden cubes, half rubbed with the polish and half not. See how it brings out the wood grain and generally prettifies them nicely? 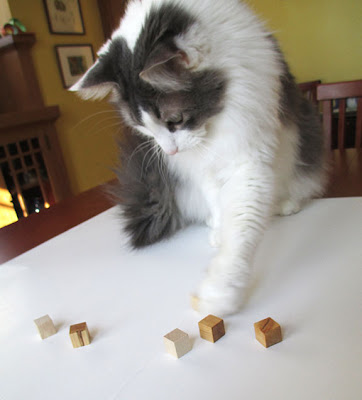 Oops. Better put the cubes away before they disappear under the furniture.
Posted by Sharon Parker at 5:55 PM