A Walk Below the Falls on a Spring Morning

It was just a few days ago that the nights here were so balmy that we left the windows open all night for the first time this year. I awoke early Tuesday morning, feeling the humidity in the air, hearing the birds, sensing the sunlight peaking under the partially raised shade of our east window. When it became clear to me that I wasn't going back to sleep, I decided to get up. It was about 6:30.

Up early on a spring morning, I decided to go for a walk. (And not knowing that soon the wintry chill would return yet again—I awoke this morning to see snow on the green grass. Yes, on May 3rd.) 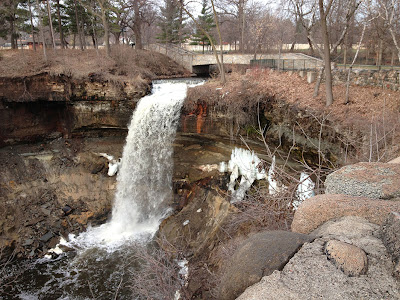 We live just a half mile from Minnehaha Falls, so I walked down to admire the waterfall's abundance fed by the melt down of all the snow we got in April (more than in January!). 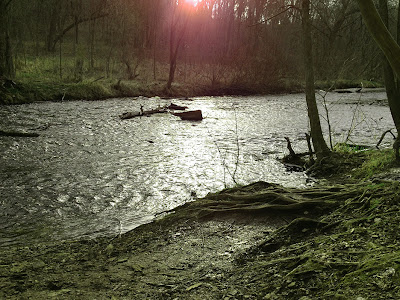 I descended the many stone steps to the creek below the falls, which leads to the Mississippi River. 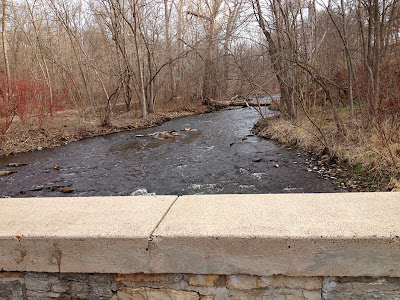 Spring is getting a late start around here this year, so there's not much color yet other than the stems of the red-twigged dogwood (seen on the left above). 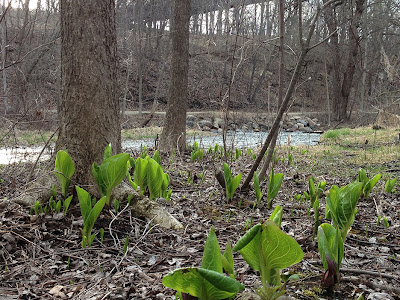 But as I continued along the path and then the boardwalk, I saw a welcome smattering of green. Much of the ground surrounding the creek here is marshlike, and so there is a boardwalk to allow visitors to keep their feet dry and not disturb the soft soil, where bog plants like this skunk cabbage thrive. 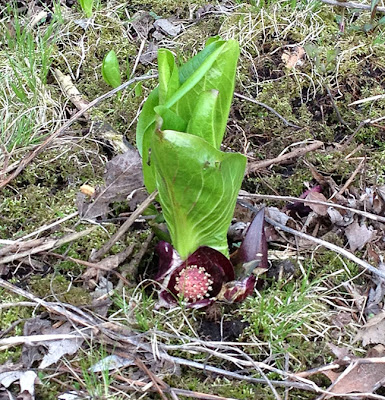 I don't recall ever seeing skunk cabbage in bloom, so this siting was a real treat. 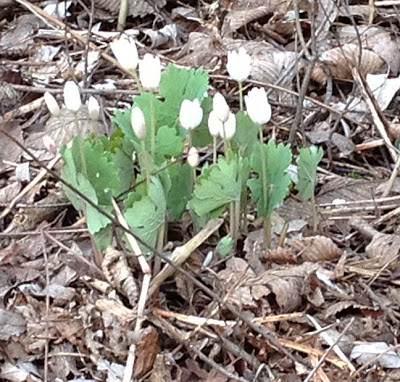 This stand of bloodroot in bloom was also a pleasant surprise. 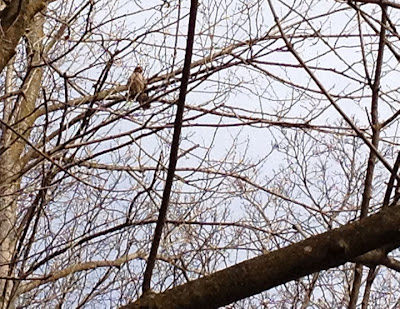 I was alone for most of the time, except for the songbirds and this small hawk; we have two species of small hawks here in the city, Cooper's and sharp shinned, but I didn't see this one well enough to tell which it was. It was keeping a good watch on me, though. 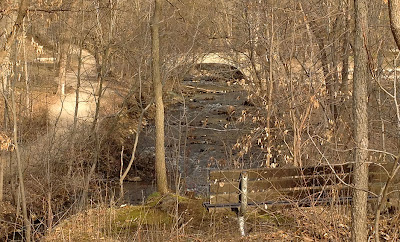 When I reached the end of the boardwalk, the trail up ahead was muddy and rutted, so I decided it was time to head back home. I did cross paths on my way back with a young couple out for a morning stroll, he with a cup of coffee in hand. Other than those two and me, there was nobody down by the lower creek on this warm spring morning, and no sound other than the creek and the birds.

I walked home from the park a couple of blocks on city sidewalks, waiting for a gap in the morning traffic before crossing 46th Street, up another half block, and in through my front door to make breakfast and tea. I'd been gone an hour but had only walked a couple of miles in that time. Yet it seemed as though I had been so much farther away.

Posted by Sharon Parker at 6:12 PM