A June Evening in the Garden

A late June evening and the solstice less than a week away and surely these are the very best days of summer, especially the very best long, lingering evenings. Finally there is enough shade on my east-facing backyard to capture the subtle details of the Henry Hudson rose; I know I've posted photos of this one already, but the yellow stamen at the center always seem to get lost in the bright light of day, so here is a better view of it by the evening light. 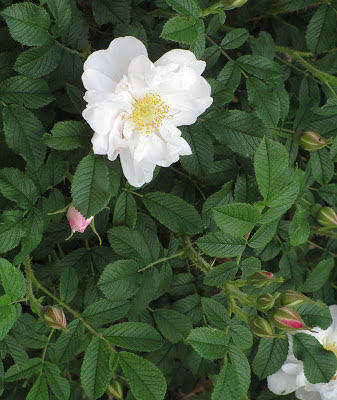 So far it is looking exquisitely healthy, and it is a disease-resistant rose, but I think it is later in the summer that the toll of excessive rain and whatever critters the wind blows in will be the test of that. Having it so near the patio encourages me to check it regularly for signs of problems. So far, so good. I did bury a bit of alfalfa meal and organic fertilizer in its planting hole last summer when I brought it home, and I bought it from a nursery that doesn't use pesticides (Sam Kedem's in Hastings), so it got off to a good start at least. I also planted it in a open airy spot with morning sun, all necessities for roses so that the dew and rain will dry off their leaves quickly and reduce the risk of mildew.

Meanwhile, the other rose, a very tough and vigorous and downright exuberant specimen, Rosa glauca, is going to town and loving its breezy spot with lots of sun. I think I need to get a tuteur for it, though, it's a bit all over the place. I bought it in the fall of 2011, and it is arching over the garden fence and reaching for the top of the clothes pole already. Here I'm only showing you a glimpse of one branch coming in from the right because it's hard to capture its charms and give a sense of its true size all at once. The individual flowers are small (about 1.5 inches across), single and pink. The leaves have a bluish cast to them (hence the species name, "glauca"). I chose it both for its aesthetic charms and wildlife value. It gets showy red-orange hips in fall, and the birds and butterflies are supposed to like it. 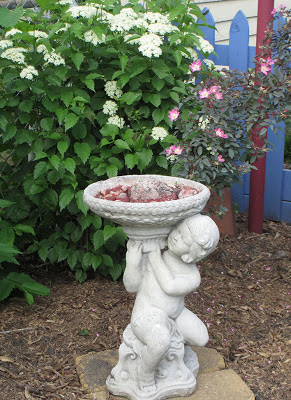 To the left above is a "blue muffin" viburnum. It will get clusters of blue berries that the birds can eat later in the summer, and the leaves turn a nice burgundy color in fall. The kitschy birdbath is one I salvaged from an alley not far from me. 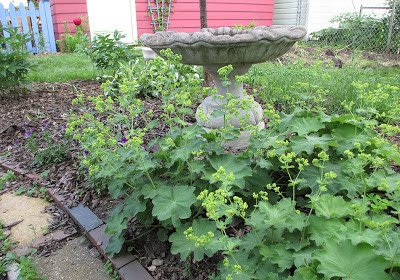 My other backyard birdbath is a large one near the patio, just outside the window of my home office, and I'll often hear splashing sounds, then look out the window to see a robin enjoying a bath. I surrounded it with lady's mantle because the fuzzy leaves hold onto droplets of water like shiny beads.

It sits under the crabapple tree, which is an attractive staging spot for birds before imbibing, like this gold finch that paid a visit as I was sitting on the patio this evening. 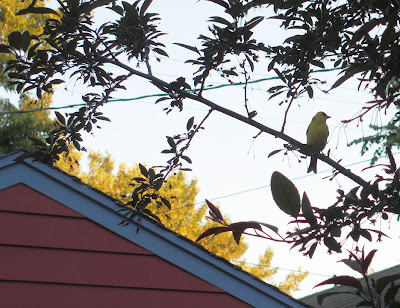 The gold finches don't hop into the water like the robins do, perhaps because it's a bit deep for them, but this bright little fellow will lean down to get a drink of water, after a good deal of cheerful tweeting to let us know he's coming in for a landing. Unfortunately, my camera wanted to focus on some weeds in the background, so you just get an impression of his wonderful color as he paused briefly, took a sip, and then flitted away before I could try for a second photo. 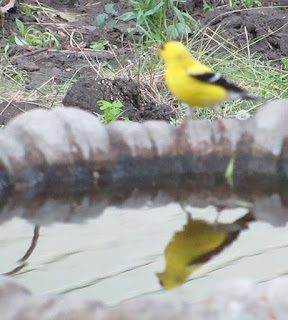