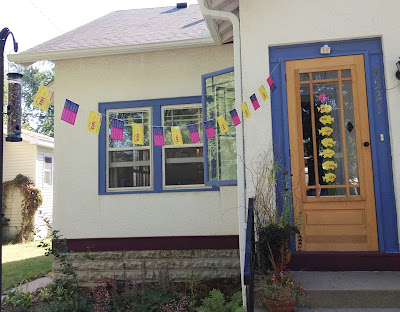 We're looking forward to the LoLa art crawl this weekend at our house. It's a self-guided tour of artists in the greater Longfellow neighborhood of Minneapolis and this is my third year participating — for the first two years I was stationed at a local business, so this is the first year I'm going to be at my own house, with fellow artist and friend Brian Western of Western Art Glass holding court in the living room while I turn the dining room into my personal art gallery. 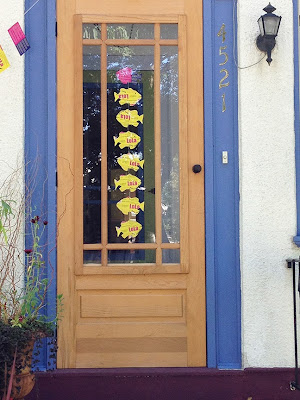 I was going to set Brian up in the front porch, because I thought his art glass fish and leaves would look swell dangling in our lovely new windows. But the weather forecast says we're going to be seeing temps above 90 again this weekend, and the porch can get pretty darned uncomfortable when the temperature soars, even with those energy-efficient windows (there's no vent out there, for one thing).

So hubby took compassion on dear Brian and invited him into the living room, despite his earlier declaration that he wanted the living room to sit and read the Sunday paper. (That was in response to my suggestion that we invite a third artist to share the space.) Despite Brian's misgivings that hubby might be inclined to hang out in his underwear on a Sunday morning, he accepted the offer to be inside with the air conditioning.

I suggested to hubby that he get a pair of silk pajamas and a smoking jacket, but then he'd have to take up smoking, which we don't allow in the house. So I think he'll be in his usual attire: shorts and a T-shirt.

But the house is getting dressed up for the occasion, at least.

And now that I've cut LoLa postcards into fish to hang in the door (in lieu of Brian's fish in the window, as I had originally anticipated), and taped another batch of them to a string as LoLa prayer flags, I'm finding myself thinking about other uses for leftover LoLa postcards.

I might make them into notebooks. Hmmm.
Posted by Sharon Parker at 1:12 PM