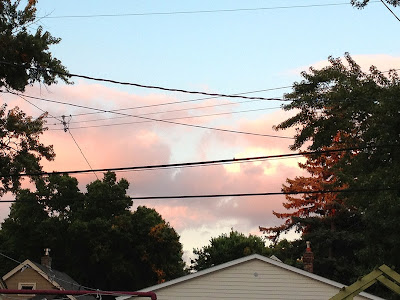 Our backyard and the alley behind our house are criss-crossed with power lines, like buntings missing their flags, connecting poles to houses and other poles, linking our house to other houses and garages and the new apartment building on the corner and across streets and more alleys, sometimes departing from their alley routes and running alongside residential streets, where too-tall trees have been pruned ungracefully to accommodate their relentless progress, which eventually connect the houses on my block to a cluster of wires and structures looking like something out of a futuristic model city surrounded by a tall chain link fence on Hiawatha Avenue. 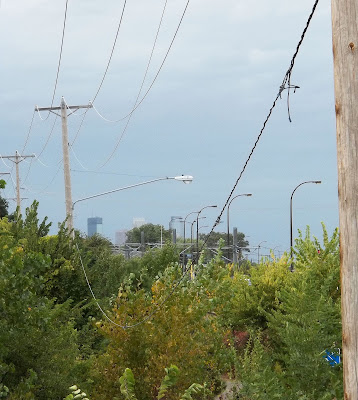 From there, bundles of wires and cables travel high above Hiawatha, which is one of our major thoroughfares known also as Highway 55, past grain elevators still in use and new construction in process where other grain elevators used to be, alongside railroad tracks that are only used for a few weeks in the spring and fall, stretching to downtown and then on out of the city to the nuclear power plant in Monticello, as well as a wind farm somewhere on a prairie in the western part of the state, although that last bit may be only wishful thinking on my part.

We sometimes sit on our backyard patio on summer evenings looking east, watching clouds turn pink in the evening beyond those criss-crossing lines.

At our previous home, there was a large rusty-looking tin can attached to the power pole, with wires and coils and pipes sticking out from it here and there. It often became a focal point of our evening conversations over a bottle of wine as we speculated about its contents and function. Sometimes we imagined it to be a Rube Goldberg device powered by squirrels. Sometimes we wondered if it could be a nuclear reactor in miniature.

Then one July day the thing blew itself up with a loud POP!, allowing nothing more than a curlicue of smoke to escape, leaving it with a jaunty-looking topknot of twisted, blackened wires. It was soon replaced with a shiny new cylinder, with no interruption in power to our home in the interim. This did nothing to diminish its mystery in our minds. 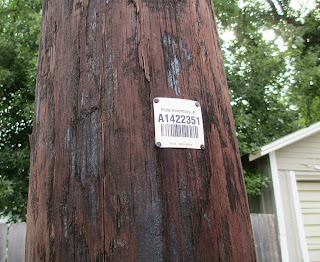 I like the power lines and the poles with their mysterious numbers and other markings. I appreciate their linear geometry, the contrast of these structures and lines with the soft amorphous forms of the clouds and the mottled green expanse of the maple tree that towers over our neighbor's backyard and the alley; the way the birds perch on them as though that is the very reason they were erected.

They provide a visual reminder of our connection to points near and far, the relationship of the built to the natural landscape. Even as we sit in our own backyard. 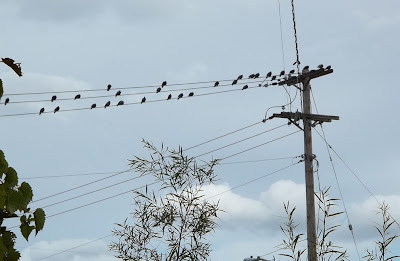