Stuff! Or a treasure box by any other name

When my kids were school age and I was looking for ways to practice basic math operations, I modified the rules for scoring rummy, counting each card at face value, with Jack=11, Queen=12, and King=13, so that we got lots of adding practice. But when it came to learning multiplication, I was stumped. I tried to think of an alternative way of scoring some familiar game and came up blank, so I made up my own game using dice and dubbed it Roll 100 (making the goal to get a score close to 100 through a combination of multiplication and addition).


Some years later, when I started getting into crafting, I thought I'd have a go at selling these games, putting them in assorted repurposed candy tins and setting them out on a table at the first Barton School Arts from the Heart craft fair one winter.

They sold reasonably well, but they attracted the most attention from kids too young to do the math. It was apparent that the colorful dice in a small tin held a certain allure apart from whatever function I had intended for them. I recall one mom buying one for her preschooler after he could not be persuaded to select something more age appropriate. 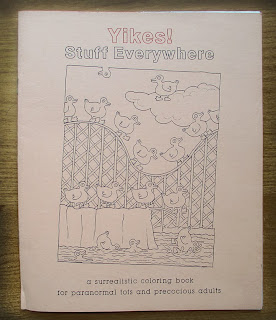 Which led me to the idea to put an assortment of dice and random objects in little tins for small children to do whatever they like with them. Not sure what to name my new product, I recalled a coloring book that artist Tom Cassidy made for his son, which he named Yikes! Stuff Everywhere; and so named my little tin of objects Stuff!

I see them as a kind of loose assemblage for kids, a random assortment of kid-pleasing objects, like buttons and old keys, game tokens and flat marbles. I looked for things to put in the Stuff! tins at estate sales and garage sales, and then started adding some new items, like tiny rubber animals made by Safari Ltd.

I enjoy collecting these various small items for the tins, it gives me an excuse to do something I am inclined to do anyway.


Creating original collages for the lids of the tins is the obviously arty part of the process, but so is the selecting of items to put in them; and fitting as many as I can while still making it possible to close the lid involves some creativity as well as spatial skills. 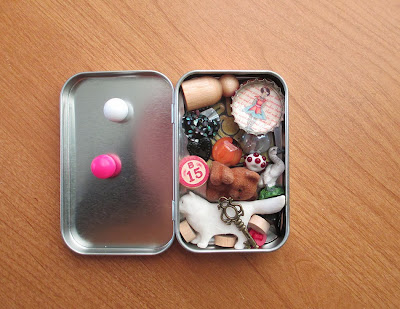 Some people ask me about the boxes and their purpose, although most don't need to be told; they understand them intuitively. So, while I sometimes struggle to "explain" them to folks who don't really get the concept, I have also discovered that the ones who do get it offer helpful descriptions I could use, calling them treasure boxes, for example.

A treasure box full of stuff everywhere. That pretty much sums it up. 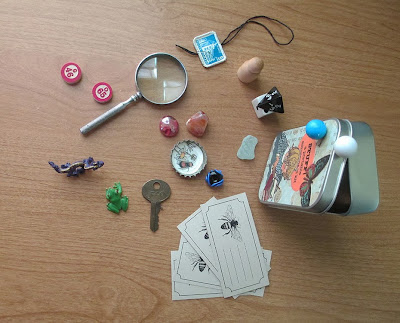 Posted by Sharon Parker at 4:30 PM No comments: Links to this post

How to get the proofreading done

When there is proofreading to be done, and it's a few hours of reading, which I really can't do all in one sitting, I find the best approach is to pack it up and head out on my bicycle to a coffee shop.

After a couple of hours' worth of reading, I get back on the bike and head to a different coffee shop.

One time while doing my proofreading at one of these neighborhood spots, one of my friends who is a freelance writer told me how, many years ago, she would take her work to the bowling alley and have a cup of coffee there. It was the only spot open on a Monday when the local bakery was closed. She did not go there for the coffee.

I am pleased to have better options these days.

Posted by Sharon Parker at 4:49 PM No comments: Links to this post