A North Shore Vacation: It's All About the Rocks

We had a little vacation last week; a road trip to Grand Marais, Minnesota, on the north shore of Lake Superior.

My husband, Craig Cox, often says that his primary goal for vacation is to "go and sit on a rock."

But I think throwing rocks is also an important vacation task for him.

I, too, am a fan of rocks. And, for most North Shore visitors I think it's safe to say, it's all about the rocks: stunning lichen-covered rocky cliffs with waves crashing against them and silky smooth beach pebbles that feel luxurious in your hand.

The beaches along this side of the big lake are made of pebbles, not sand. Pebbles that have been rubbed smooth over the eons. They are mostly basalt and granite and quartz, with enough agates scattered about to make them an agate-hunter's destination. Some people also find beach glass here—bits of broken glass bottles that have been rubbed smooth over the decades. I love beach glass, but have never found any.

We are not agate hunters, however; we are indiscriminate rock gatherers and throwers. Sometimes I even manage to skip a stone across the water's surface, when I get the angle and the spin just so.

We were sitting on the beach near our motel (about eight miles out of Grand Marais) one evening, digging our fingers into the pebbles, showing each other a perfect oval or an exquisitely silky smooth dark stone. I was preoccupied with stacking and arranging them in various configurations, making little ephemeral assemblages. 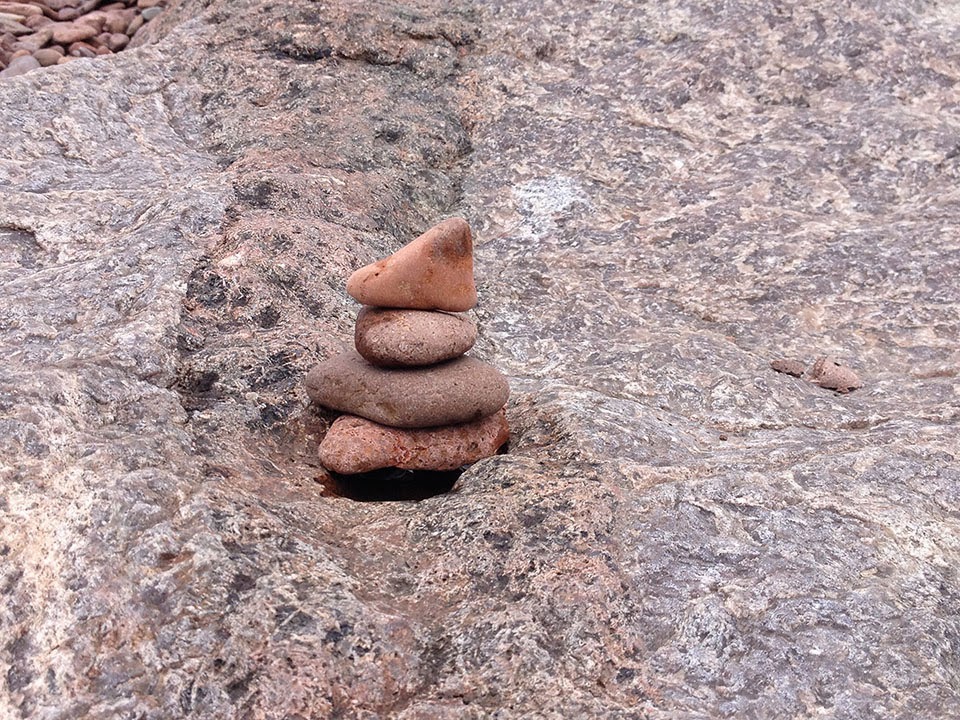 Sometimes I would find a rough stone and throw it in the lake, saying that it needed a couple of million more years of wear. While we were doing this, a woman came along walking the beach with a plastic bag in her hand, looking down. When she saw us, she asked, "Are you finding any?" 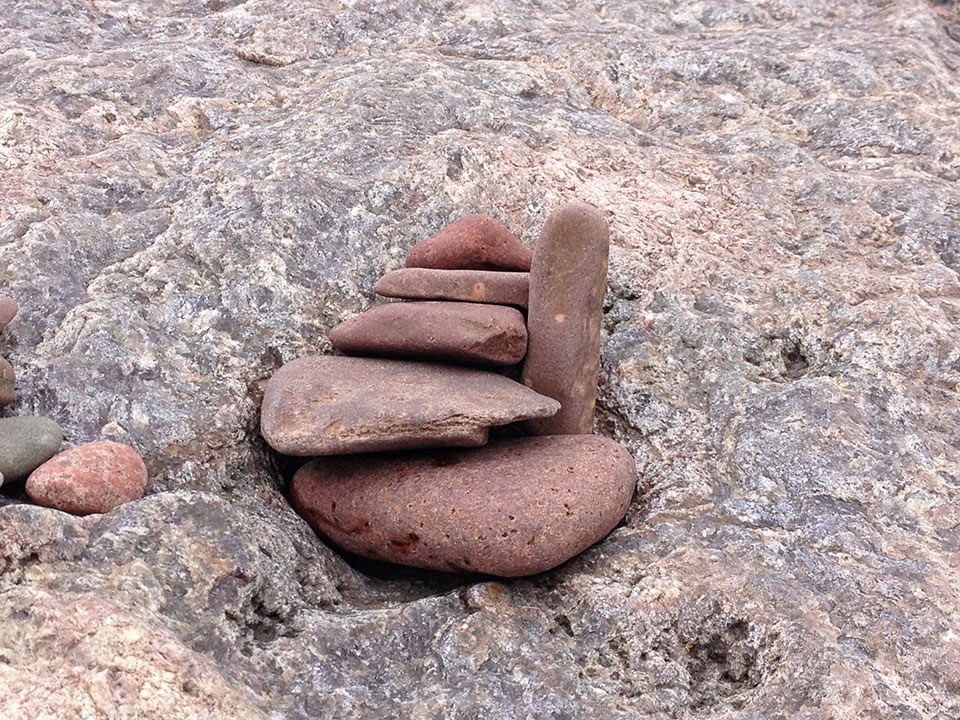 "What? Rocks?" we replied, then realized she meant agates. We confessed that we were not looking for agates,  but then I asked her, since she seemed to be good at finding things among the rocks, if she had found any beach glass. "Not this time," she said, indicating that she has found it here before. She told us that she comes all the way from Texas to look for agates along Superior's North Shore. 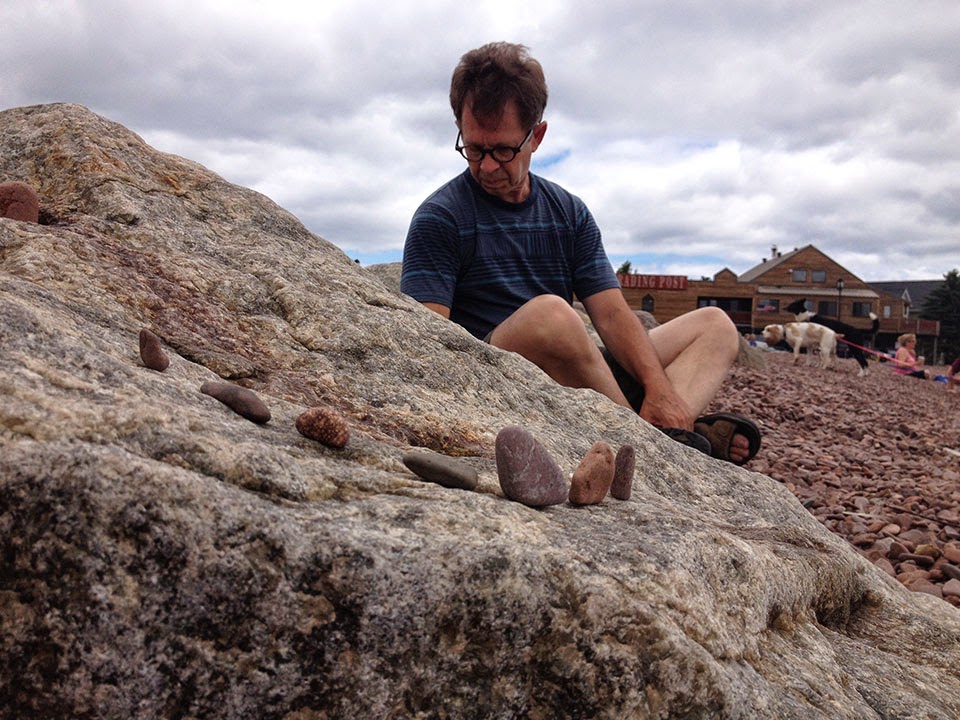 The next day, when we were doing much the same thing along the beach in Grand Marais, Craig found a teeny tiny bit of green beach glass. I put it on the top of the tiny cairn I was making and left it there.

I confess that I did take a few pebbles home. But no agates or beach glass. 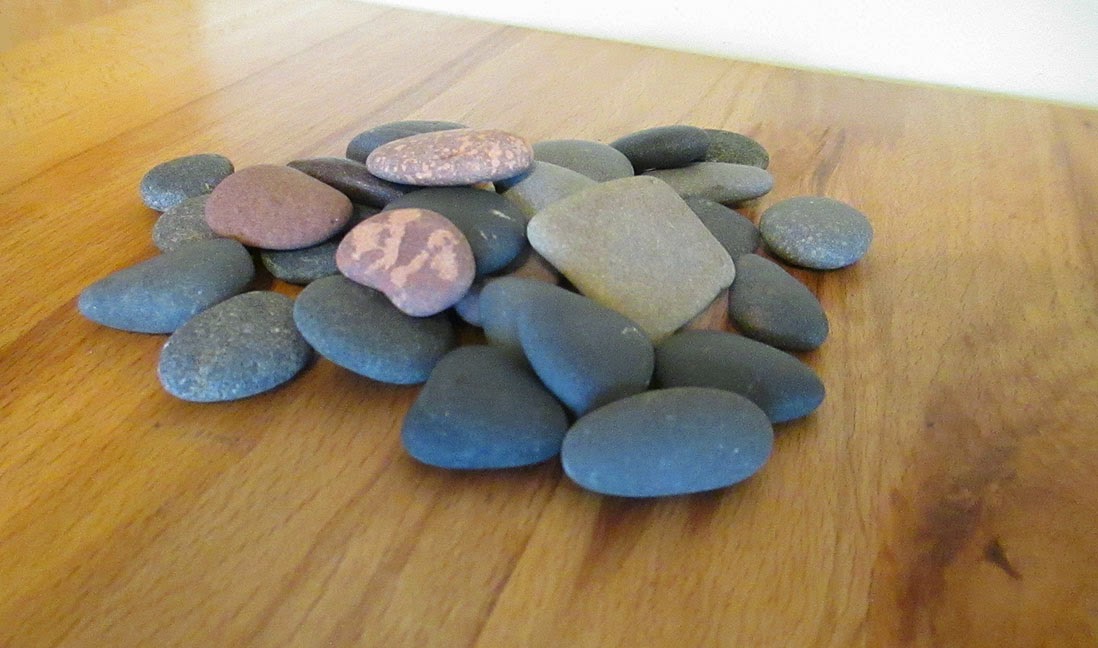 Posted by Sharon Parker at 8:00 AM No comments: Links to this post