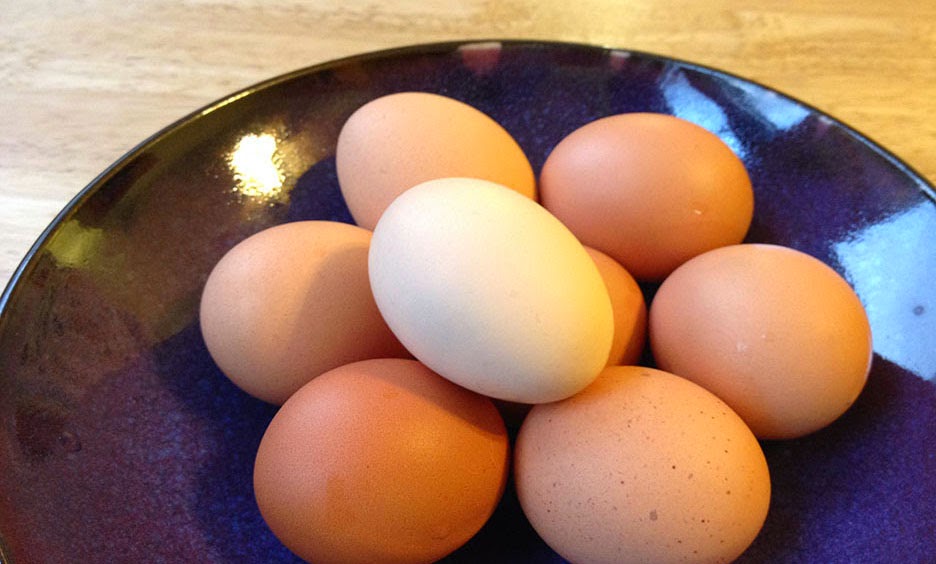 I wanted to play around with a bit of natural egg dyeing for Easter, but since I planned to make the whole batch into deviled eggs, it didn't really make sense to color the shells. Besides, the eggs I buy come with already colored shells. 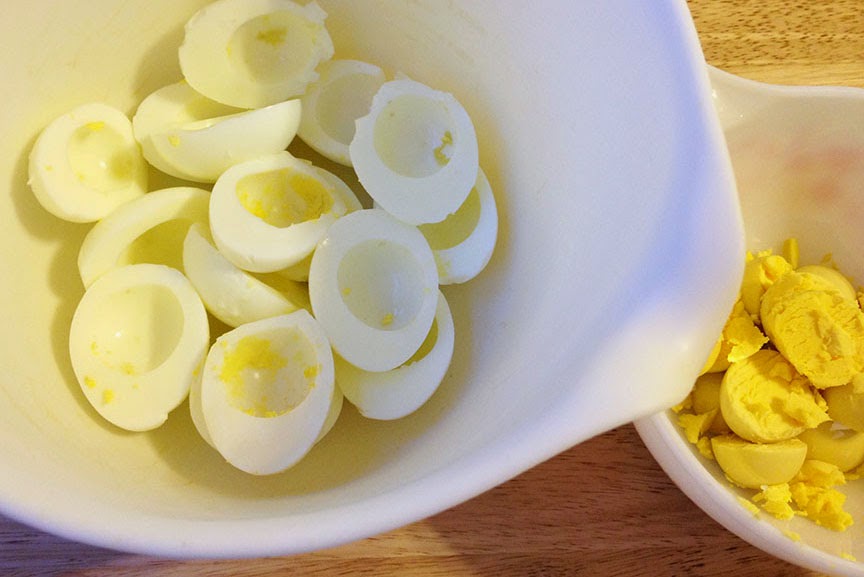 Recalling how my Grandma Parker would dye the egg whites for the deviled eggs she served on Easter, I thought I would try that, using red cabbage, which is supposed to produce a robin's-egg blue color. I shelled the eggs after cooking, putting the whites in one bowl and setting the yolks aside in another. 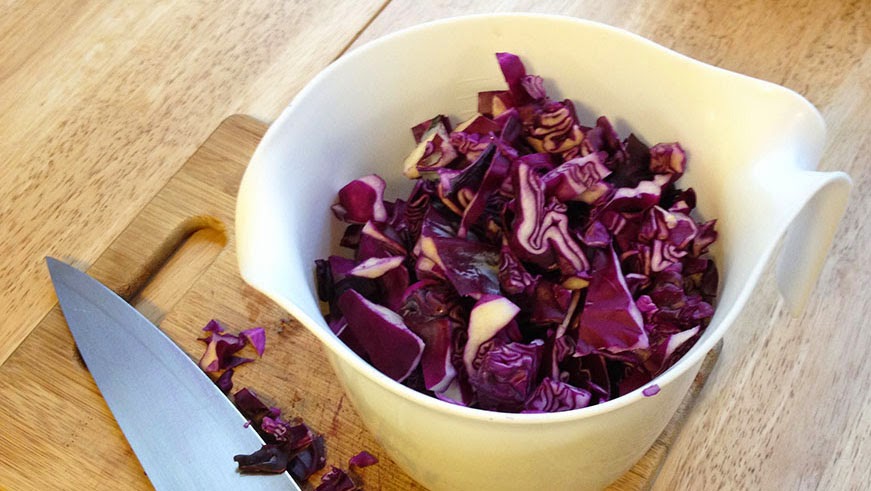 Then I chopped up half a head of red cabbage, which filled a six-cup bowl, and added that to about 6 cups of water, brought it all to a boil and simmered it for about 15 minutes, until it made a dark purple liquid. 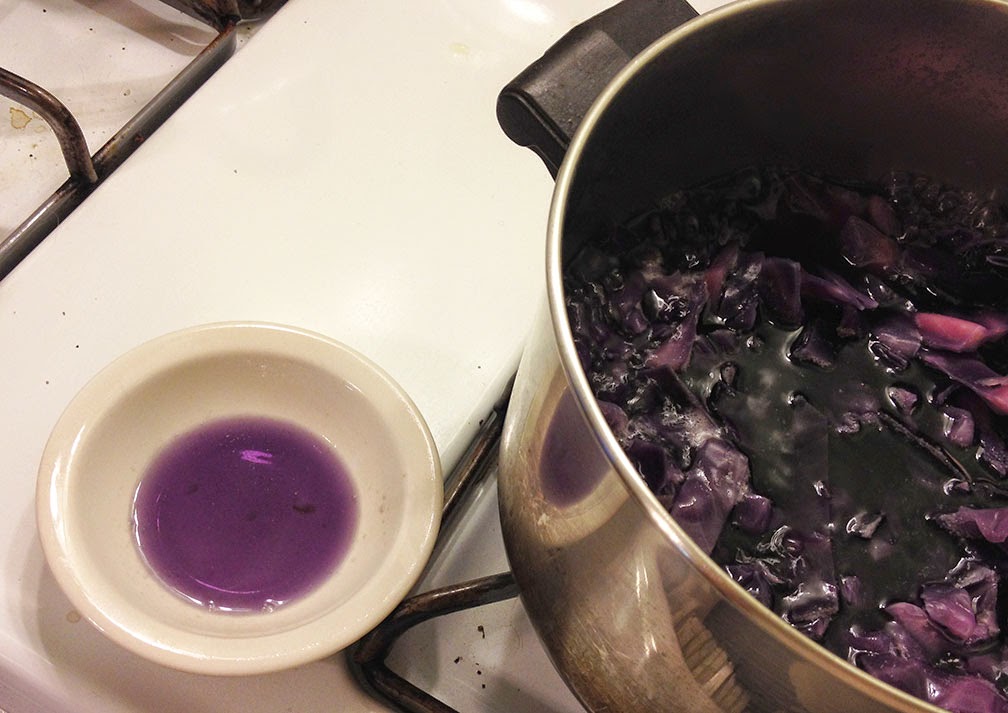 There's no need to add vinegar, because that's just to make the dye adhere to the shells. The whites will readily absorb the color without it. So I poured the liquid, chopped cabbage and all, over the whites, just enough to cover them, and put the leftover (there was quite a bit) in the refrigerator.


I left them in for about two hours. During that time I mixed up the yolks with mustard, mayonnaise and some chopped onions and spinach for the filling. When I removed the whites from the cabbage dye bath I found they had turned a rather deep denim blue. I probably could have left them for a shorter time. I placed them on paper towels to dry off a bit, then stored them in the fridge overnight to fill in the morning, just because that was more convenient for me. I thought they smelled a little bit like cooked cabbage the next morning, but that dissipated quickly once they were sitting on the platter uncovered. 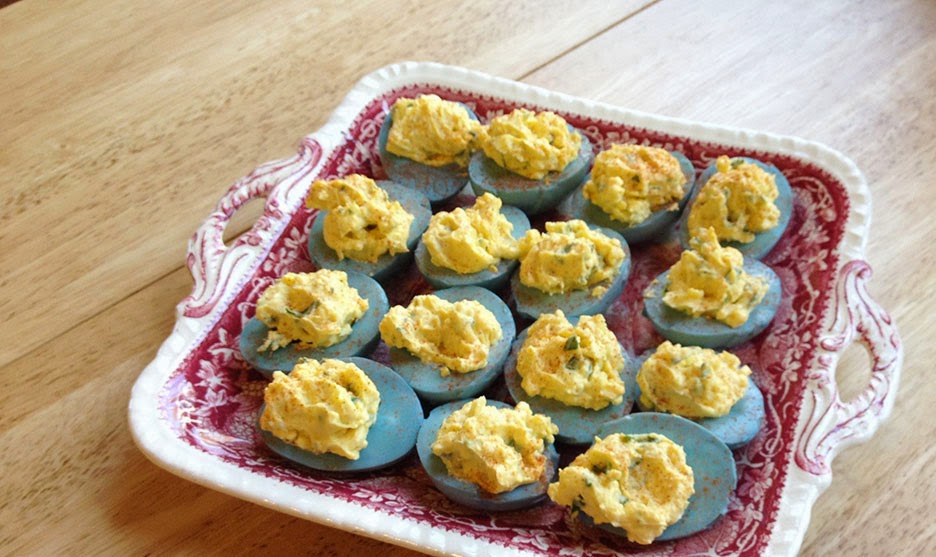 I plan to experiment some with the leftover liquid. I immersed a few yards of natural (off-white) linen thread used for bookbinding, and got this silvery lavender color after about 3 or 4 hours .(I should do a better job of record keeping if I'm going to be doing experiments!) 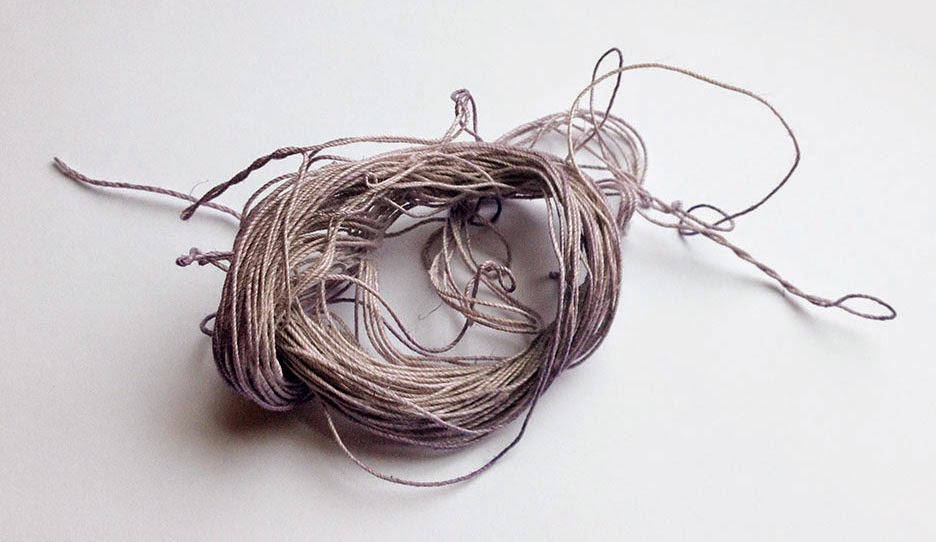 I rinsed it thoroughly with cold water to set the dye, but won't worry about that too much, since nobody puts a handbound journal in the wash! But before I play around with this homemade dye and fabric, I'll be sure to do a little more research about mordants and such.

And I hope to have no waste — the leftover cooked cabbage is quite edible!

Posted by Sharon Parker at 4:52 PM No comments: Links to this post