I wrote about the origins of the Useful Calendar, and why I call it that, in this post yesterday. Today I'll finish the story.

Once I started selling the calendar on Etsy, I shifted from a hyper-local focus and made it into an international calendar. It now includes all US federal holidays and many international observances, as well as important holidays of the world’s major religions.

Each year it seems that I discover some holiday or observance I haven't included before that I feel I should add, either because it's from a country that I see as on an equal footing with others I've chosen to include (if the Belgian National Day, why not the Swiss?), or because I find it to be a delightful occasion and think others will too (such as the Japanese Doll Festival). Depending on when these occur, I may drop something else to fit it in (July and August almost always have room; February and March are always crowded).

2012: The Year of the Dragon and a Bigger Calendar

A few years ago, my husband suggested that I make the one-page poster version larger, so I made it tabloid-size (11 x 17 inches) in 2012.

It was the year of the dragon, and with our own bankruptcy and foreclosure still fresh in my mind—stemming from the failure of the Observer in 2006— and knowing that so many others had been through a similar experience what with the recent real estate bust, I drew my dragon as a (mortgage) banker in a blue suit. It was sort of my own little inside joke.

And since I had a little extra space in January, I added a quote from Patricia Wrede's book, Talking to Dragons: "Always be polite to dragons."

Design Innovations Spurred by a Robbery

My approach to designing these has been pretty much haphazard and jury-rigged, using Adobe's Illustrator program when InDesign is better suited to the task. But in 2012, when I was nearly finished with the 2013 edition, I got an opportunity to start fresh with an InDesign template created by my friend, Marsha Micek, a professional graphic designer.

The impetus for this improvement was the theft of my computer (and my husband's) along with our backup drive in October 2012. I had to start all over again, including re-entering all of the data and text, at a point when I should have been printing it out for a craft show that weekend. I cancelled my part in the show and spent the next couple of weeks scrambling to reconstruct the calendar with Marsha's excellent (and patient) guidance, in order to get it ready for another craft show in early November.


The new template worked great, but in my haste, and being more than a little flustered, I completely messed up the month of July, starting it a day late and giving it only 30 days (the second mistake kept me from screwing up the months that followed, however). My husband discovered the error a few months into the year. He thought it was amusing, but I was mortified. How can I call it the "useful" calendar when a mistake like that? 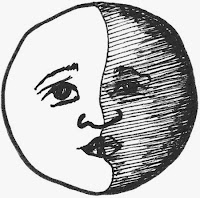 In this year, I stopped circling and naming the full moons and instead did some drawings of the moon phases to use across the bottom of each month. I did this to add another graphic element to the design, as well as to provide a little more moon phase information for those who were looking for that sort of thing.

I obsessively checked and double-checked the 2014 edition, and discovered no embarrassing errors in that one, though I do recall some minor errors I found and fixed after I thought it was done.

After my daughter graduated from college and completed a 6-month internship at Experience Life magazine, I realized that I had access to a skilled proofreader, and asked her to read the 2015 edition. She was very thorough and caught some spelling irregularities and inconsistencies that had existed for a few years, plus my placing of Cinco de Mayo in March. I like to think I would have caught that one myself before printing it. 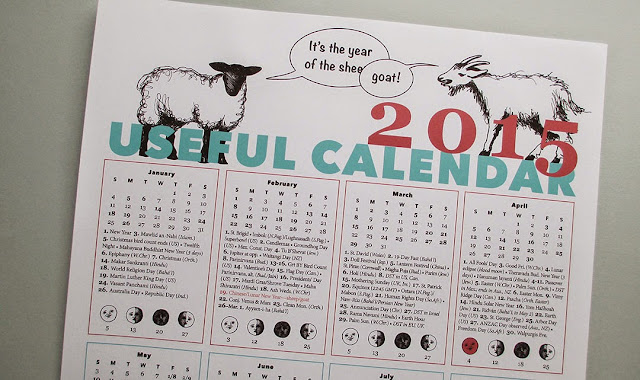 I had been doing a few sketches of sheep for this year's calendar when I learned that some people called it the year of the goat. That led me to do a little more research, and some goat drawings, and to then work this dichotomy into the calendar design, along with a brief explanation about it, because, you know—Arty Didact.

I wrote about the goat/sheep year confusion here earlier this year.

Among the things I enjoy about creating this calendar each year are the serendipitous discoveries I make during the research phase, such as the Japanese Doll Festival that I mentioned above. So many of these holidays have interesting stories behind them that I wish I had room to say something more about them without sacrificing the functionality of the calendar.

A few years ago, I started putting notes on the backs of the cards to offer a little bit of explanation, especially for those holidays that I thought most of my audience would be unfamiliar with. Then I realized that the stories behind even familiar holidays are often forgotten, so I mixed it up a bit, changing some of the occasions for which I offer explanatory notes from one year to the next, and introducing some calendrical trivia where I had room (August, mostly).


This has become my way of sharing the serendipitous pleasure of learning something new and interesting as you make your way through the year.

Of course, these little trading-card size calendar pages don't allow for much in the way of telling the stories behind holidays, and so I have often thought about introducing a third version of the calendar that would be a sort of zine, or an almanac, with short informative articles about calendar-related topics. And while I'm at it, why not provide space for people's own notes, like a planner? I played around with a prototype of this last year, but didn't have time to develop it further.

And so now, while my updated list of dates and events for the 2016 Useful Calendar is in the hands of my capable fact-checker, I am in the process of developing the new Useful Calendar-planner-almanac. And playing around with what to call it. Because Useful Almanac sounds even sillier than Useful Calendar. On the other hand, there's branding.

So my current working prototype (really a couple of prototypes, this journal made with scratch paper being one) has multiple names. Or maybe one name followed by an explanatory subtitle. 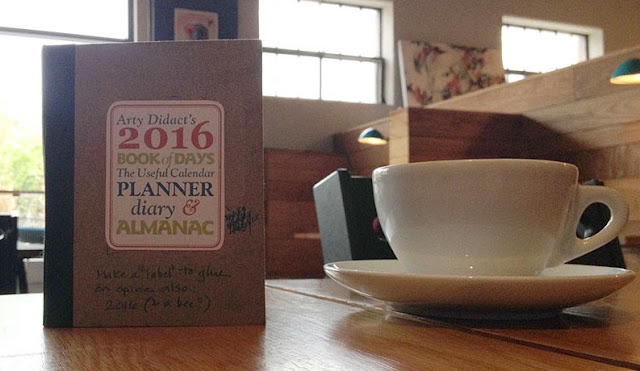 Posted by Sharon Parker at 8:30 AM

Email ThisBlogThis!Share to TwitterShare to FacebookShare to Pinterest
Labels: almanac, arty didact, book of days, calendar trivia, serendipity, the Useful Calendar, year of the dragon, year of the goat or sheep