I could say that I've been neglecting this blog because I've been busy taking care of my garden. But I haven't. Fortunately, my garden mostly thrives on benign neglect. Unfortunately, so do the weeds. (Blogs, on the other hand, don't seem to care one way or the other.)

Despite that, I've got some lovely things happening all around my neglected garden. Here are a few highlights, starting with the front.

The yellow-orange mums in the little concrete urn that sits atop the steps at the sidewalk have perked up nicely a day after I discovered them all droopy because I hadn't been watering them. (A hazard when you've had abundant rainfall all season -- you forget to water things when it stops!)

And now that the coralberry is starting to change color, I see that the leaves are a perfect match for the potted mum. I may have to move the pot to the other side so they don't get lost in the matching background, but I do rather like the hints of harmonious color at this stage.


My hardy mums, planted in the ground near a dwarf Korean spruce, are a handsome bold red. Now there's some contrast for you.


Meanwhile in the backyard, the Prairie Fire crabapple is looking fabulous, and a few of the leaves are starting to turn, offering a hint of the show to come. The fruit generally lasts through the winter, depending on how hungry the squirrels are. A couple of years ago I had a delightful surprise when a flock of cedar waxwings filled the branches one spring afternoon and pretty much picked it clean. What a show that was!

Under this tree is a fairly large concrete birdbath, next to which I planted annual white salvia, which the bees have been enjoying this summer.


And over in the corner by the garage and a "rocket" juniper, is the English lavender that has proven to be quite hardy in Minneapolis (USDA zone 4a). 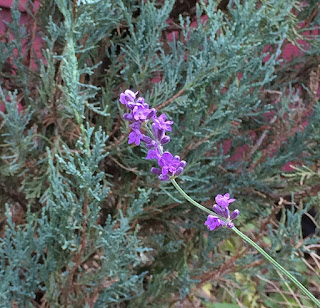 It even survived the polar vortex winter of a couple of years ago. We rake leaves on top of all the gardens but otherwise don't do anything extra to protect it.

I've found that it's best to cut it back pretty severely in the spring and it'll send up lots of new growth. It starts blooming about midsummer and keeps going into fall.


This is Lavandula angustifolia, I'm pretty sure.

Over by the "kitchen garden," which is enclosed by a blue picket fence, are some bright marigolds mingling with the yarrow I transplanted to this spot after removing a diseased aster. I kind of figured that the disease, which looked like some sort of bacterial leaf spot, was in the soil in that spot, so I figured the yarrow and the marigold are unrelated enough to not be susceptible to the same disease. Neither appears to have been affected. 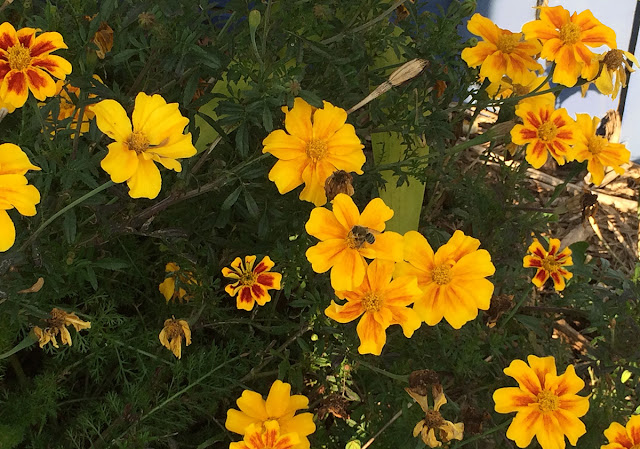 And when I was photographing the marigolds, I made the happy discovery of what I believe to be a sunflower bee (Svastra obliqua) -- it looks much like a large honeybee or small bumblebee, and is often mistaken for one or the other. But its size is in between those two, and its abdomen is more distinctly striped than the bumblebees that frequent my yard (Bombus impatiens, which have mostly black abdomens without stripes).


And just beyond that, the cosmos tumbling over the fence is hosting a Bombus impatiens. 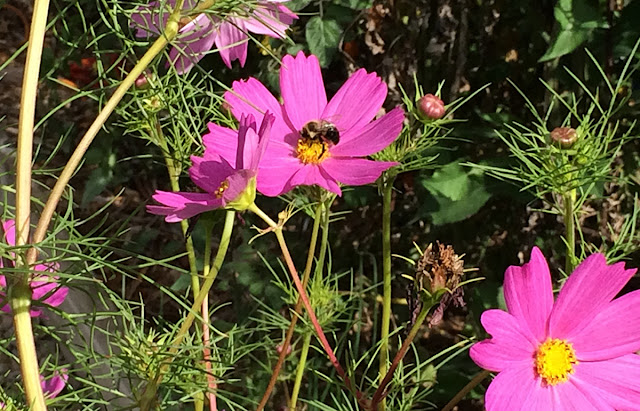 Oh, and I mustn't forget the Henry Hudson roses, which are loving the cool fall weather. In fact, they retain a little more of the hint of pink now that the sun isn't shining so intensely on them. 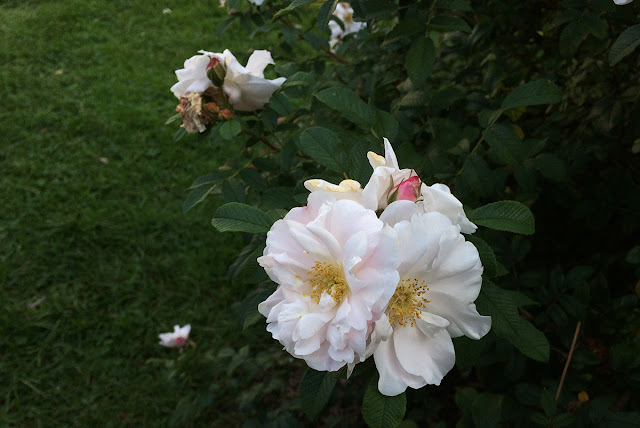 And since I stopped deadheading it after early August, it has started to form the cherry red hips that Rugosa roses are known for. 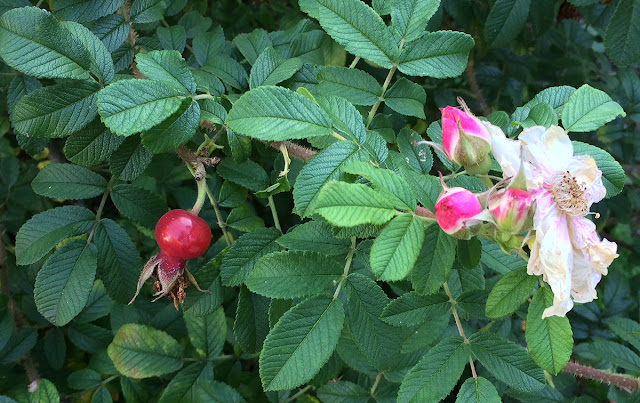 So there's your garden tour for early October. I'll take you on a little tour again later this fall  after the leaves are showier.

And in the meantime, I'll have to get out and do some weeding, and planting --  I've got bulbs to plant! I ordered a whole bunch of them from John Scheeper's and they just arrived a few days ago. Time to get busy.
Posted by Sharon Parker at 3:58 PM No comments: