Lately I've been fascinated with watching the different types of bees visiting the flowers in my garden. I'll be sitting on the patio with my tea and the newspaper when I hear the distinctive buzz of a bumblebee on the nearby rugosa roses. When I get up to take a closer look, I notice that there are other types of bees on the roses also, and as I watch them for several minutes, I discover that the interaction between the different bees can be rather comical (which I'll describe after I introduce the characters).

The bumblebees in my yard are a little on the small side, except for the queen, who is huge. At one point when this bumblebee was hovering, I got a glimpse of a band of brown on her abdomen, which you can just barely see in this photo, leading me to suppose it might be a brown-belted bumblebee. 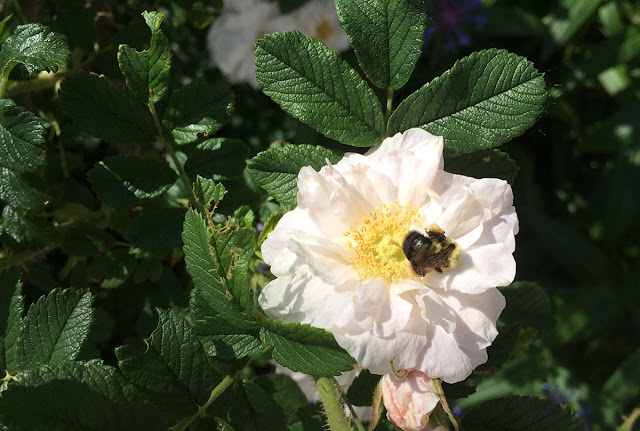 The description of the brown-belted species also notes that the queen is quite large, and it's a common species around here, so I'm going to say that's what it is.

Bumblebees have this habit of curling their bodies around the pollen anthers and then vibrating vigorously, which is a really effective way to get the pollen out of tomato and pepper plants because those flowers enclose the pollen in a cagelike structure and the extra vibration shakes the pollen free. The technique is called buzz pollination or sonication, and it's the reason bumblebees (and a few other bee species that do this) are the most effective pollinators of those crops. Honeybees don't do that, and neither do most other wild bees.

Bumblebees also flit about from flower to flower and back again, never spending much time on each visit. This is a very effective pollination technique for row crops because it results in a more thorough mixing of pollen.

Neither of these techniques are necessary for roses, but they don't hurt, either, unless you're a smaller bee working the same roses, and then the bumblebee's clumsy frenetic maneuvers can get rather annoying.

Here's one of the smaller bees at work on the roses. It's most likely a type of digger bee, so called because they nest in the ground. There are many such species, and I don't know which one this is, but it sure looks a lot like the one featured on this page about Minnesota bees.  There are many types of wild bees that nest in the ground, but they are solitary (not hive-forming) and harmless, so there's no reason to fear them. To help these bees it's important to not get too carried away with the mulch, because that denies them access to nesting sites. (Learn more about that in a post I wrote this spring.) This bee was so still, I watched it for a few moments wondering if it was really alive, and then noticed that it was quietly munching on pollen. It's almost like it's kind of a zen bee, meditating on the roses.

And there's a still smaller bee, one that resembles an ant with wings, and is probably of the genus Ceratina, or small carpenter bees. They are called that because they chew holes in soft woody material, mostly cut plant stems, where they lay their eggs in brood cells. There are a few solitary bees that use plant stubble this way, and it's the reason you should leave some cut stems standing in your garden. Their jaws are not strong enough to be destructive, so no worries there. 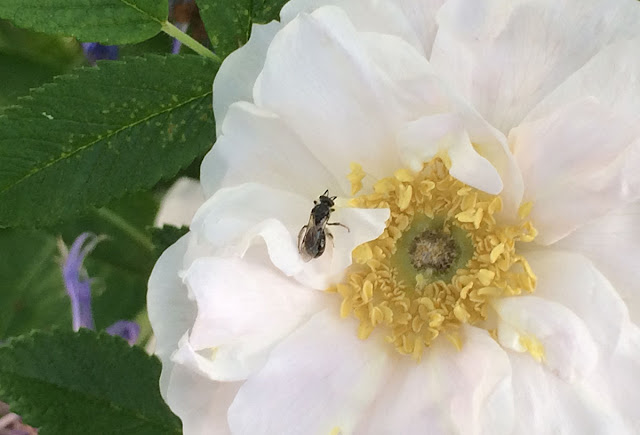 The comical part, which I was not able to capture with my iPhone camera, came when the bumblebee visited a flower that already had another bee in it.

The small bee would be quietly minding its own business when the bumblebee stumbled into the flower and bumbled about, actually knocking the smaller bee off to the side away from the pollen.

Elbowing it out of the way like it was the roller derby!

Most of the time, the smaller bee moved out of the way and waited for the bumblebee to leave, which it did before long, and then the small bee would resume its meal.

But on another occasion, when I noticed both digger bees and bumblebees on my wild rose (Rosa blanda, a volunteer I decided to keep), the digger bee appeared to be attempting to fend the bumblebee off. I saw its tiny front legs come out on one side in a waving motion, as if it were trying to push the bumblebee away. The bumblebee appeared oblivious to this effort, buzzing right on the top of the smaller bee before moving along.

I just couldn't help but think it was like a bee version of a Laurel and Hardy routine. Who knew that backyard bee watching could be so entertaining?

Posted by Sharon Parker at 3:10 PM No comments: Links to this post