Learning about and drawing a finger labyrinth

Lately I've been working on reviving an item I stopped selling in my Etsy shop about a year ago. It was a small tin box with assorted items intended to provide a few moments of calm;  I called it a respite box.

I've made a few modifications since I introduced it in early 2012, but the constants have been the hankie/altar cloth, the two sets of instructional and inspirational cards, a wire-and-stone note holder, the beeswax tea light, and the finger labyrinth. Plus the cover featuring a yellow vintage map with a crow and the word "respite" together with its definition. Of those items, the tea light was the only one I didn't make myself (and the tin, of course). (The beeswax tea light is from Minnesota beekeeper Sweet Bee Honey.)


That finger labyrinth proved to be the fussiest part and the main reason I decided to take a break from making them last year. It was also its main attraction, judging by the search terms that led people to the listing.

The labyrinth image is one I found on the internet that I could download copyright-free, and it was among the simplest versions I encountered. I reduced it to slightly over 2 inches wide, imposed over a background of a paste-paper/acrylic paint experiment of mine, which I liked because of its mottled pattern and soothing green color. 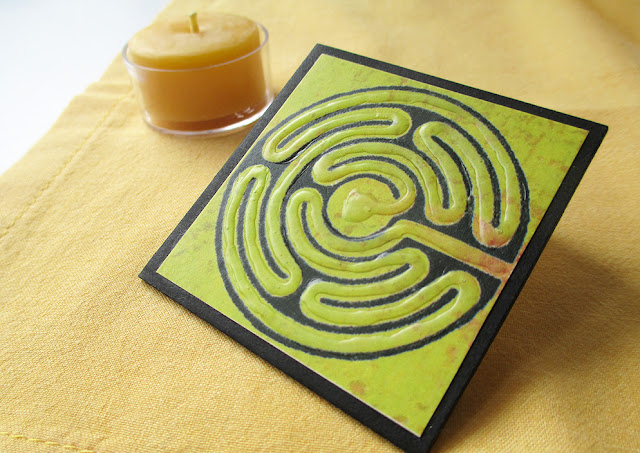 Then I would trace the path with Mod Podge (a type of glue that holds its shape pretty well and dries hard) applied with a small paint brush, in order to create a smooth raised surface for tactile tracing. After a while, the experience of tracing that tiny tight winding path with my paint brush again and again, trying with great effort to control the flow of the glue and keep the width somewhat even, felt very little like a mindfulness practice and much more like tedious neck-straining sweatshop work. So I stopped.

But I still like the idea of this box of mindfulness objects, and I do get inquiries about it on Etsy from time to time, so I've been meaning to revisit it to see if I can find a new way to make the finger labyrinth that I won't mind doing repeatedly.

I started by doodling and pondering alternative labyrinth shapes. Like, why not a simple spiral? Perhaps one that winds in and then turns around and goes back out. I made a prototype and found that I could trace its path with the glue in a small bottle, no need for a brush.


I was quite pleased with this first attempt and set about to review and revise the rest of the components in the box, beginning with the text of the instruction cards. That's when I realized that I had written almost nothing about the labyrinth, other than to refer to it as a tactile object. Really? Shouldn't I include a little bit of information about labyrinths in general and finger labyrinths in particular? Something about their history and uses?

So I embarked on a bit of research, reminding myself that this is not a thesis, it's just a little bit of text. But in order to write a little bit about any topic and have it be meaningful and truthful, one needs to have a somewhat thorough understanding of it.

So far I've just read a few things I found online, but I've also downloaded an article from Science News and one from an academic journal called Agni, and I picked up a book from the library I'm looking forward to perusing. (Hopefully, I'll be content with these sources and not continue on a quest akin to walking a very large labyrinth!)

Labyrinths, mazes, and the number 7
I learned that labyrinths are different from mazes in their concept and design, in that mazes are intended to confuse and challenge you, with their many dead ends and wrong turns, while labyrinths are designed to guide you into a meditative state of mind, offering a clear path to the center and back out again.

“Walking the labyrinth is to experience that inner stillness, as the labyrinth’s intricate steps gently take the conscious mind out of the way,” says the website Chakra Balancing, which has some interesting information about labyrinths and the seven chakras (energy centers in our bodies), claiming that the classical Cretan labyrinth of antiquity relates specifically to the chakras.

Another site, Labyrinthina, also relates labyrinths to the number seven, beginning with the Hopi people of North America and their classical seven-path labyrinth representing Mother Earth.

So I began to play around with modifying my simple spiral to make it relate to this mystical number seven. 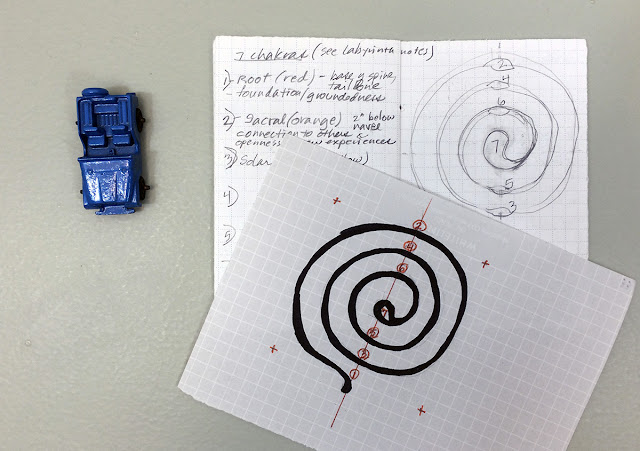 I read about how to use a labyrinth to get into a meditative or prayerful state of mind, as described in the New-agey website of the United Christ Church Ministries rather eloquently, and in terms more familiar to traditional Christians by the Upper Room. And it soon occurred to me that a continuous spiral doesn't really fulfill that function; it's just a little too simple.

But how do I address the need to make a path that doubles back while wending toward the center, and still meet my need to keep it simple enough to be traceable with glue?

So I resumed my doodling, and feel that this one may be it, although I still need to trace it in glue to see if it's too fussy. 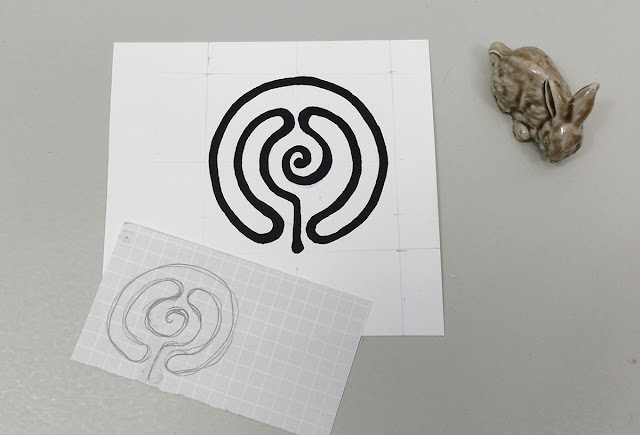 It can also relate to the number seven if the starting point is considered to be one, and each major bend along the way is the next in the sequence, with the center being seven. It's not seven paths, but seven turning points, which seems symbolically appropriate to me.

You may notice in the above photo that my preliminary sketch wends to the right and the second one goes left. I switched it because I also read that one is supposed to trace the path with their non-dominant hand, and I'm right-handed, so going to the left first is more natural for me. It also seems intuitively that it should probably proceed clockwise.

But I'm still learning about it, so I may change that. Or perhaps I will make it an option, to have it proceed clockwise or counterclockwise.

However, I won't try to become an expert on labyrinths before getting on with my project!

BTW, here's a sneak peek at a prototype of the new cover, with a small watercolor painting I did of a path in a birch woods as the background (and the X to be replaced with a number, of course). 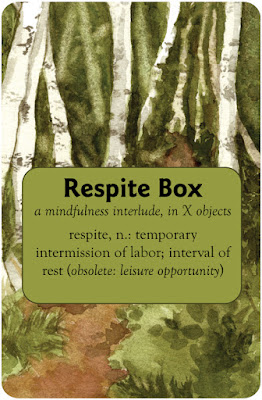