Yesterday as I rode my bike home from Dogwood Coffee shop, I stopped to photograph some of the flowers I noticed along the way.

April in Minnesota is not particularly showy, but gardeners around here are no less thrilled to see the first crocuses, squill and bloodroot open their blossoms than tourists viewing the tulip beds in Keukenhof. You just have to know to look for them (and appreciate their subtlety).

You may be surprised to know that we have forsythia in Minnesota. We have a few hardy cultivars, and they are just starting to bloom now, so although this one is not very showy today, it will likely be covered in cheery yellow blossoms in another week or so. (I didn't get a better photo because I would have had to trespass to get close enough.) 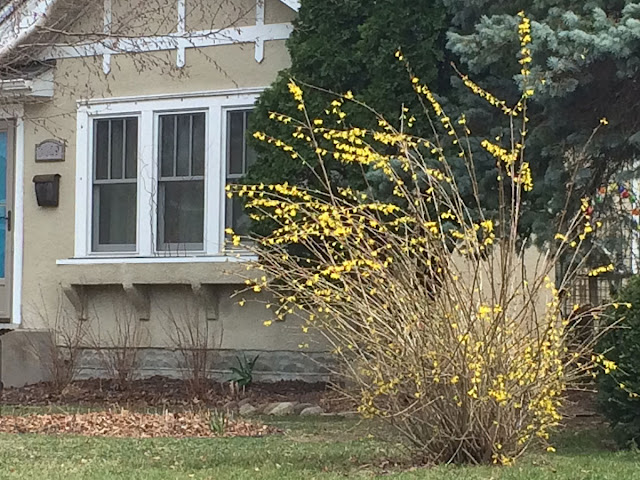 I love forsythia for its early show of color—and yellow is my mother's favorite color, plus it is usually blooming on my father's birthday (April 11), so it always makes me think of them—but I have developed a preference for native shrubs that benefit our local insects and birds, and this is originally from Asia, so the critters it attracts mostly don't live around here, which is the main reason why I haven't planted one at my house yet.

But they might be good for honeybees, and may provide an early food source for ladybugs, and—suburban and small town gardeners take note—they are deer resistant. Plus, like any large shrub, they provide cover for wildlife. So ... I may be talking myself into finding a spot for one of these cheery shrubs after all.

Large-blossomed crocuses and sapphire blue squill have rather suddenly appeared in lawns and gardens everywhere. 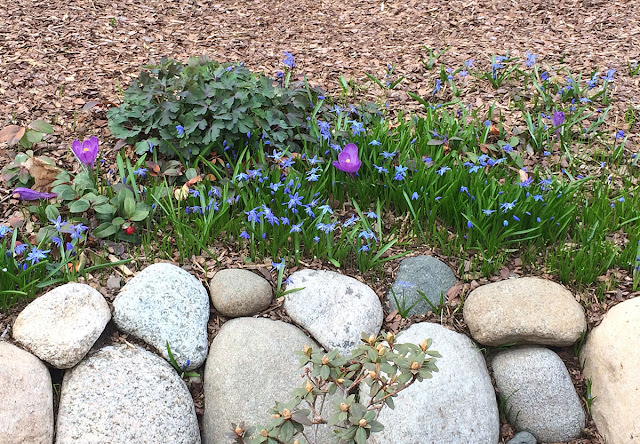 This garden also shows its emerging columbines, which will bloom starting in May, and in the foreground is an azalea, which will have bright showy blossoms for many weeks once it starts. The small oval-leaved plant with one red berry on the left could be our native holly.

Here's a closer look at a clump of the squill, which naturally spreads broadly, and because it blooms so early, many people plant it right in the lawn. 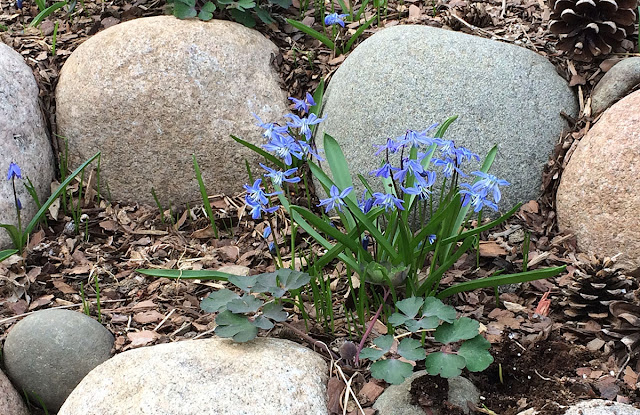 That columbine (the leaves are shown here) could be our native wild columbine, which is quite ubiquitous. 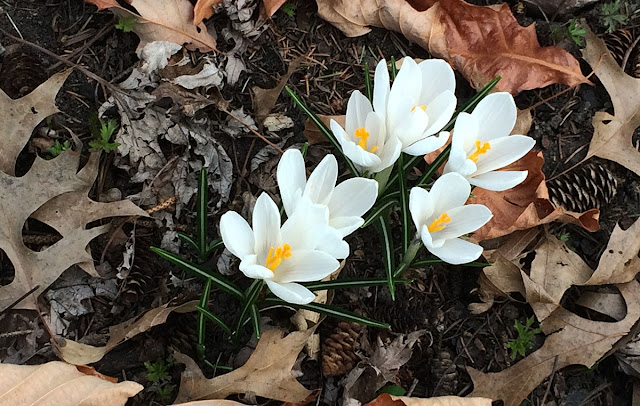 Here's some white crocus next to the sidewalk, with mulch provided by the oak trees that line this block, and a nearby conifer, it appears. I didn't think to look around to see what tree the cones came from. 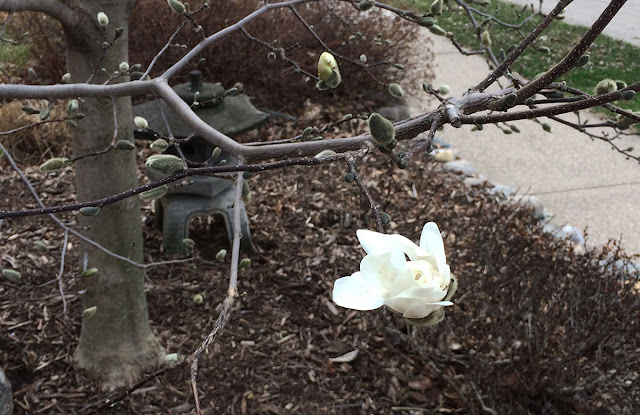 Another surprising tree for Minnesota, and a University of Minnesota cultivar, this magnolia grows on my block. Since I know these people, I felt free to walk right into their yard to get a close-up of the one blossom that has opened so far.

In my own front yard, the crocuses are less showy and have mostly faded by now. That's because they're a species crocus, which is the original wild version of the plant. The blossoms are smaller and open earlier than the larger cultivars, which I see as a pretty good trade-off: I get the earliest blossoms, and they look pretty showy compared with nothing else blooming in late March. 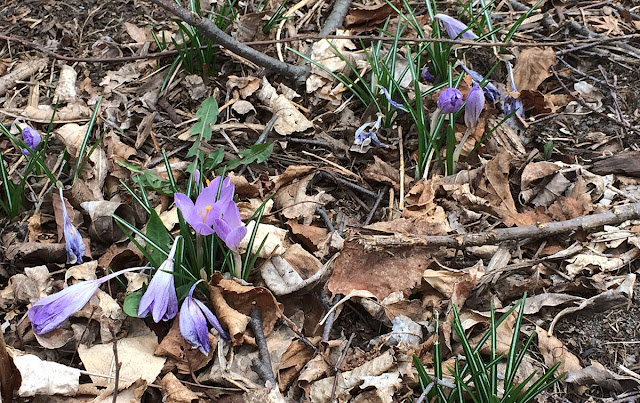 Here's a closer look at my yellow crocuses, taken on the 30th of March. 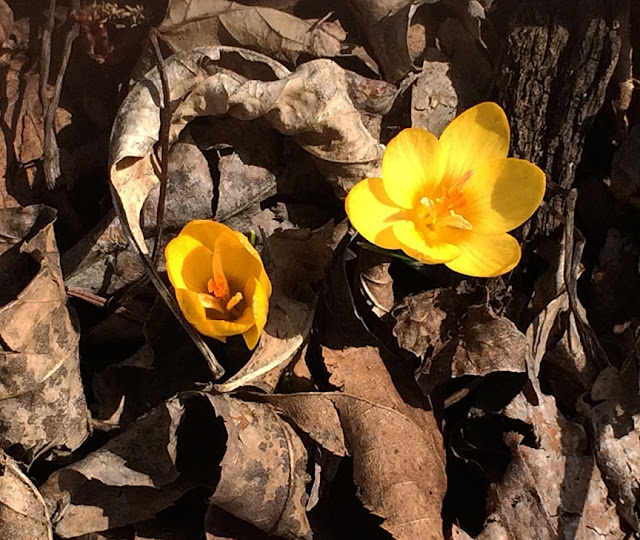 And a purple one, from about a week ago. 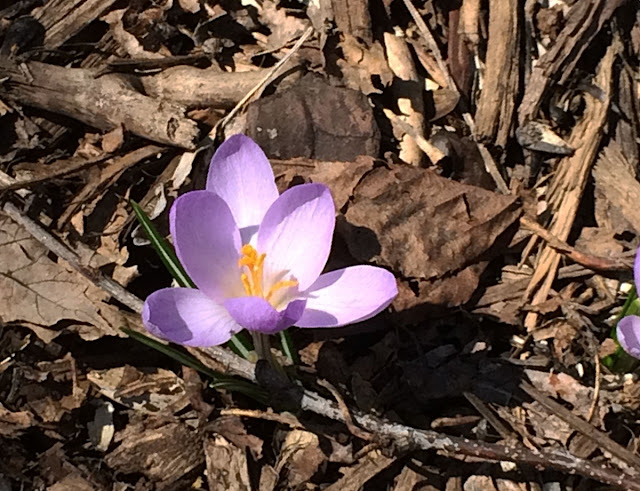 And here's the bloodroot on the other side of my front yard. My next door neighbor's bloodroot always blooms almost a week before mine, probably because it gets more sun and it's next to the house, so the soil may warm up sooner. The thing is, when hers is blooming, mine is nowhere to be seen at all, and then a few days later it's like, pow!, Hello! As you can see, the leaves emerge curled and showing only their gray underside, which makes them blend in with the mulch pretty well until the blossoms open. 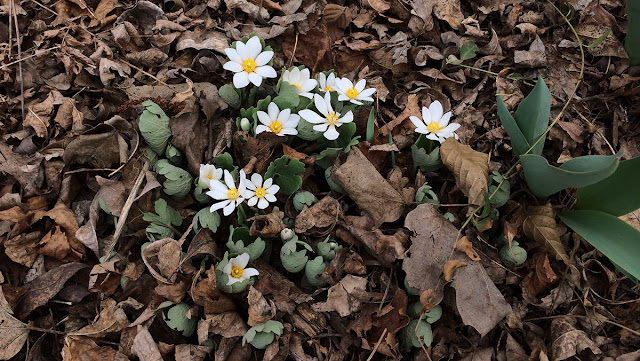 I mentioned earlier my prejudice for native shrubs because of their wildlife value. But I do have a weakness for boxwood, which is from Europe. I have read that its blossoms are welcoming to honeybees (also from Europe), and apparently the European paper wasp, which was quite intent on its nectar gathering when I photographed it. 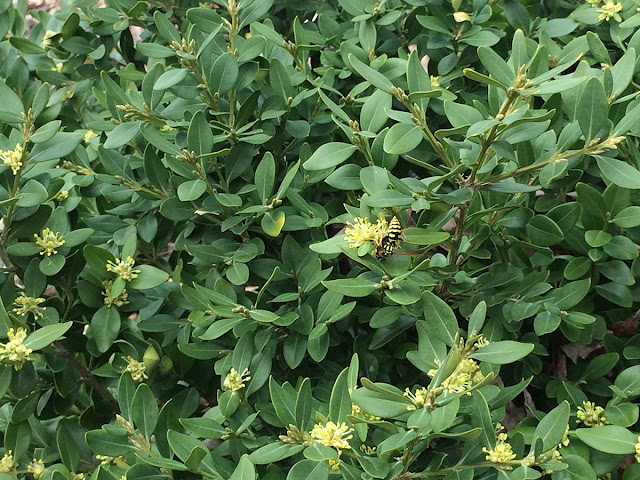 This wasp resembles a yellowjacket, which can form quite a large and hazardous colony. But I examined my photos in closeup and confirmed that it really is a European paper wasp, which, though a nonnative species, is a beneficial insect for gardeners, preying on insect pests and caterpillars, and being rather mild-mannered. Its colonies rarely reach more than a couple of dozen and its open umbrella-like nests are quite small. 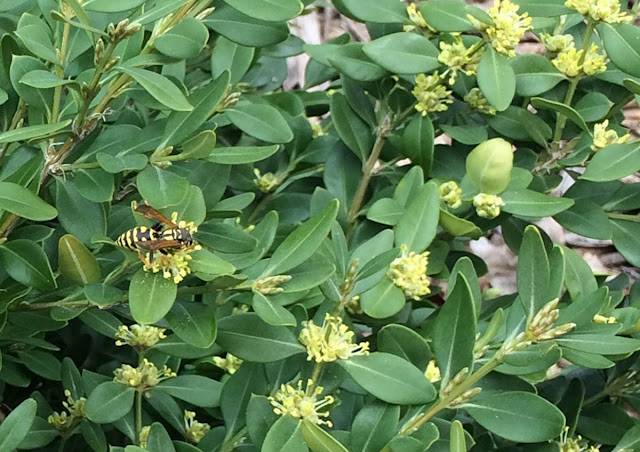 I often find these paper wasp nests inside birdhouses, like this one from 2014, which is attached to the roof. This is a particularly small one (and might be from our native paper wasp instead), but the largest I've seen has been about twice this size. Still quite small! 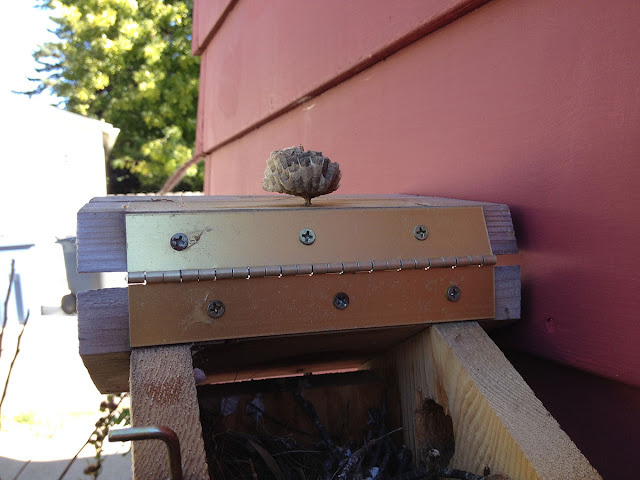 One year when I was cleaning out birdhouses in the spring, I disturbed two wasp queens that I thought were dead, but they roused and flew sleepily away. Only the queens overwinter, the rest of the colony dies off when it freezes.

Apparently they can and will sting if you get too close to their nest, but so far I have had no unpleasant encounters with them and have only seen them out foraging, when they don't seem to mind the presence of a curious human watching them.

So I am quite glad to have these helpful insects on pest patrol in my garden.

Posted by Sharon Parker at 1:57 PM