The 2018 Useful Calendar Goes to the Dogs

The Year of the Dog is coming up in 2018, so how could I not want to make that the theme of the Useful Calendar, my annual project of research and art?

I'm embarrassingly late with the calendar this year and there's no excuse for it. I even got an early start, working out my color scheme back in February and setting up the framework for a new design for the cards, so as to make more room for artwork and generally make it more visually appealing.

This just in: calendars are done and available in my Etsy shop (just click this sentence). Yay!

More room for art means that instead of doing one illustration of a dog for the cover card, I needed 12 dogs. So I made a plan for getting it done in a timely manner, including doing all the illustrations by mid summer.

I'm still working on those illustrations.

Collecting photos that I can use as references for my watercolors is one part of the challenge. This summer I took some furtive photos of dogs with people, but only one turned out to be usable, as it happened.

Mostly, I have looked online for photos I could use as references without violating anyone's copyright. For me, that means not considering art photography, and not copying anything as closely as I did my own photo. The photos I looked for were to give me the general idea of the scene I'm trying to create, with wide creative interpretation, as with this snowstorm photo from a Chicago newspaper article. 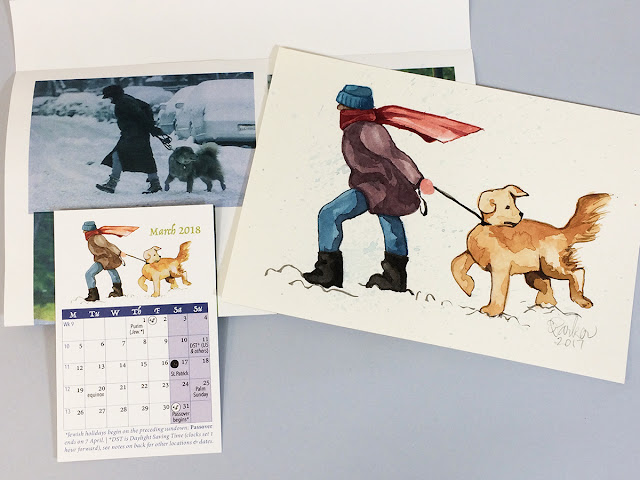 As you can see, it was rather drab and dark anyway, but very helpful in getting the sense of walking a dog during a March blizzard.

I changed the person's garments, modified their posture somewhat, added the scarf both for color and to convey the sense of the wind, and changed the breed of the dog to sort of a golden retriever, with a wind-blown tail.

This rainy scene was also from a newspaper photo, with fewer modifications, especially to the dog. But still dressing the person up a bit more colorfully and modifying their posture a bit, especially to hide their face under the umbrella. 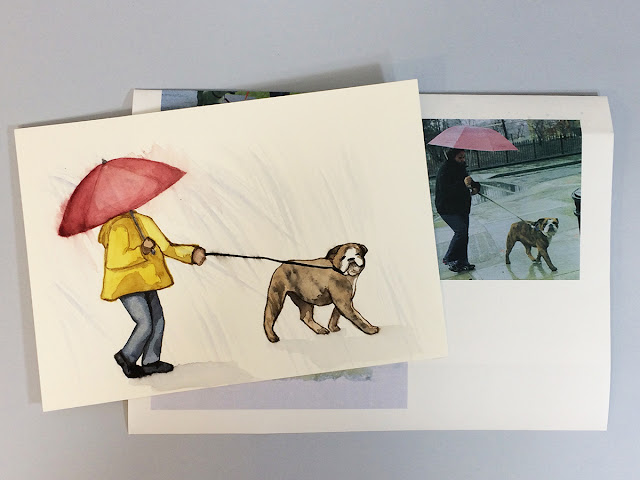 I'm still plugging away at the illustrations at this late date in November, but I'm kind of getting on a roll, you might say. It's like I'm getting more familiar with basic dog anatomy and that makes the process a bit quicker. I no longer create a grid over the photo to get the proportions correct, I just do a few quick sketches, decide on the things I want to change, and then get out the paints.

Once the artwork is done and placed, I'll just need to tinker with the design to make a version with the weeks starting on Sunday so customers can choose their preference. I'll proofread it again, too, even though I've done so several times already. I may even catch all the mistakes by the time the artwork is done.

Fortunately, we don't have a lot going on over Thanksgiving, so I hope to have it completed by the end of the holiday weekend. 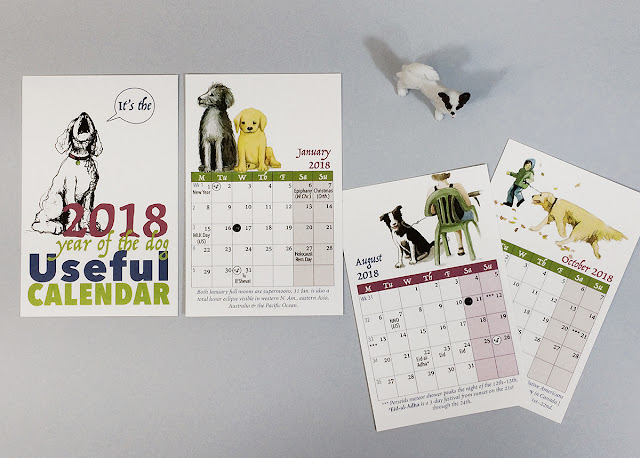 And the featured cover dog was easy — I used an illustration I actually did complete this summer, for my little zine about listening to the night sounds in my bucolic city neighborhood, which I wrote about here.

And that drawing is also going to be my December dog, since it looks to me like it's singing a Christmas carol. So I used it to make a Christmas card as well. 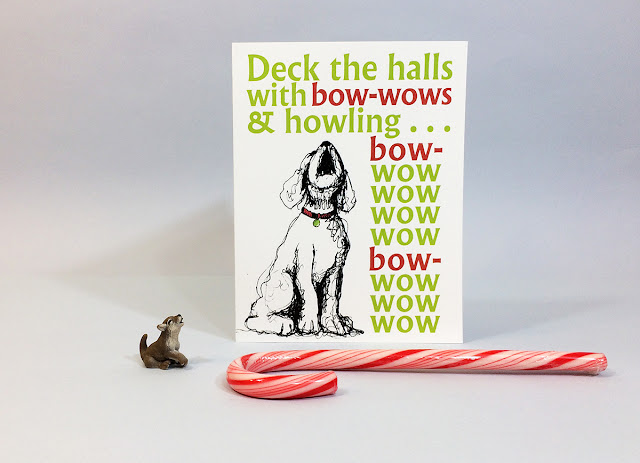 SaveSave
Posted by Sharon Parker at 8:00 AM