I was going to bring some warm clothing to the Free Store at Central Lutheran before attending my yoga class in the Nokomis neighborhood Thursday. The church is located in downtown Minneapolis near the convention center. On their website, they say the Free Store is in the triple-wide trailer at the back of the parking lot. I already knew the location of the church, so I figured that should be easy to find. I mean, a triple-wide trailer in a parking lot? How could I miss that?

But I was wrong. Not only about how clearly I remembered the church's location (that took a bit more circling around than I expected, but I did find it), but about spotting a triple-wide trailer in a parking lot that didn't seem to exist.

It looked like the convention center parking ramp and other public parking surrounded the church, and the space adjacent to the church where I expected to find their parking lot with its trailer was all built up or under construction or both.

Circling anything in downtown Minneapolis is no mere trip around the block, either. I crossed the nearby freeway a couple of times and looped back and made sudden changes as I encountered one-way streets I couldn't enter.

And in all that I never spotted a triple-wide trailer in a parking lot. I became convinced that the Free Store didn't exist anymore and the church's website needed updating. So I gave up and headed away from downtown, meaning to take the freeway back to Nokomis, only to get onto a ramp pointing me in the opposite direction.

I exited and promptly headed the wrong way on a stretch of Lyndale Avenue where it's divided and then made a hasty U-turn up over a curb and onto the sidewalk just to get out of the way of oncoming cars. (No one was walking there at the time. I did look.)

Once the traffic cleared enough for me to come bumpity-bump back over the curb off of the sidewalk and heading in the right direction, my choices were to go back downtown again, follow the lane that leads to another freeway off to the western suburbs, or make a left-turn onto Vineland place between the Walker Art Center and its sculpture garden. I made the turn and pulled into a parking lot and sat for a moment to get my wits about me.

I looked out at the half dozen people walking around in the sculpture garden in the zero-degree sunshine and thought, That's what I need to do right now. So I sent a text to my yoga teacher to let her know I wouldn't make it (it's a small class), wrapped my scarf around my head and neck, and stepped outside. 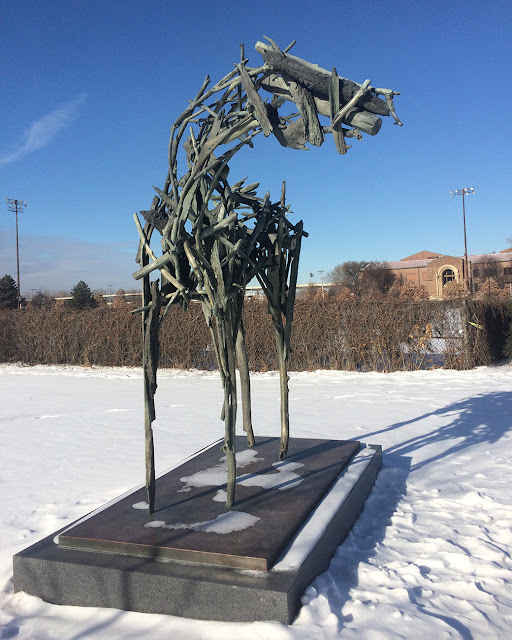 The first sculpture that greeted me was a stick horse casting an understanding glance back in the direction of downtown. It was a familiar one from the original sculpture garden that I used to visit often when it was new. Now I was entering the north end of the property beyond the iconic Spoon Bridge and Cherry: the "new" part.

I chose the giant blue rooster as my destination, as it seemed just far enough to get a nice walk in without spending too much time in the numbing cold—especially numbing to fingers when taken out of gloves to take phone photos. 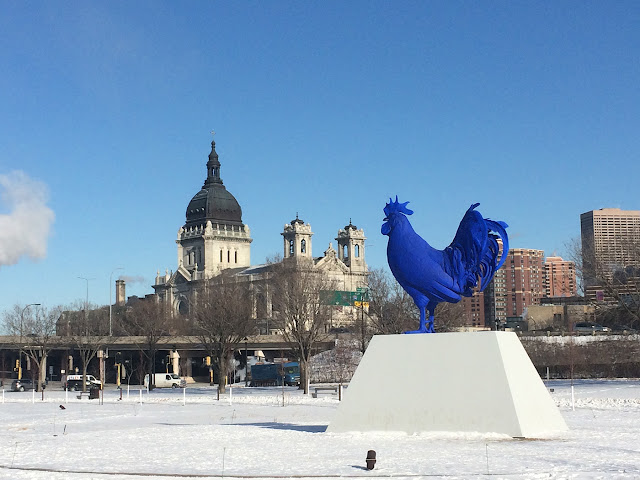 But first I was drawn to a curious black silo with doorlike openings. Was there something inside? 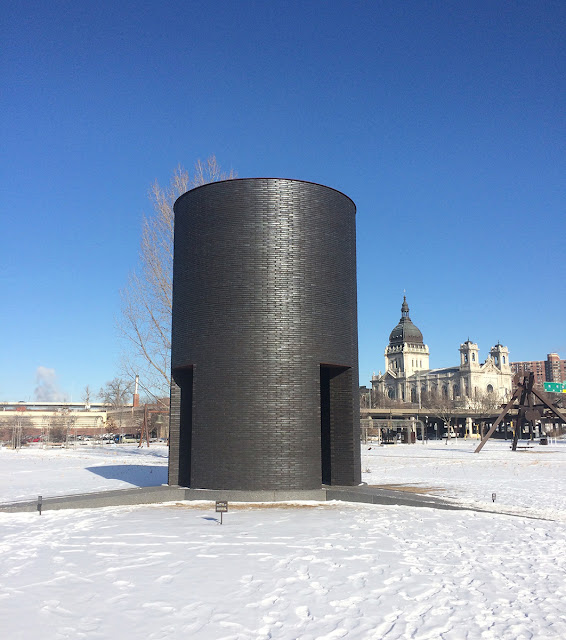 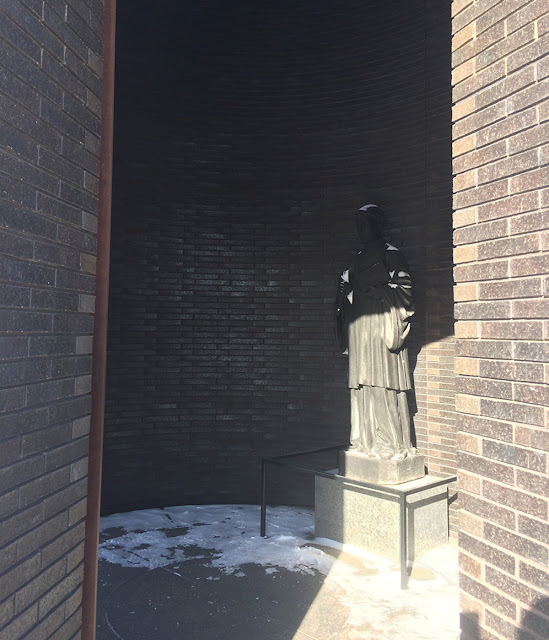 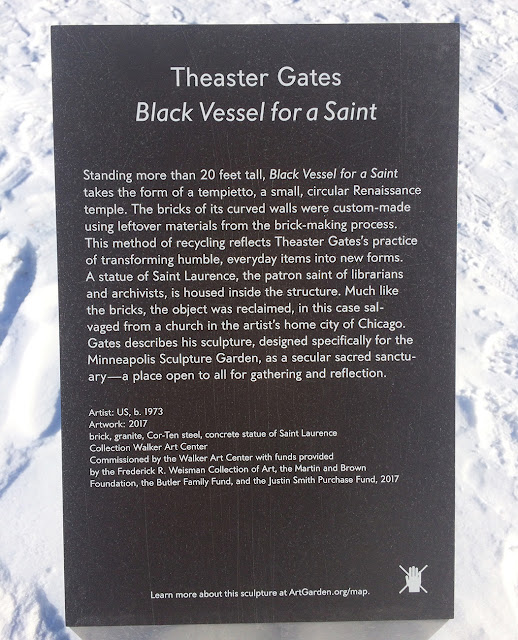 As the above plaque explains, it holds a reclaimed statue of St. Laurence, patron of librarians & archivists. The top of the silo is open to the sky and I thought I really must come back on a summer midday when the sun will be shining right down into it.

The next object that drew me was a set of columns. 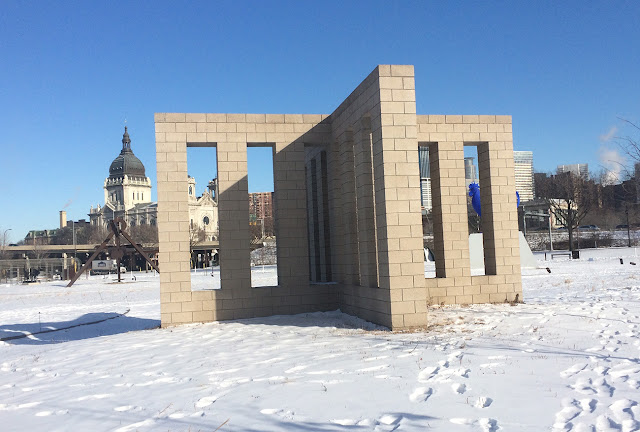 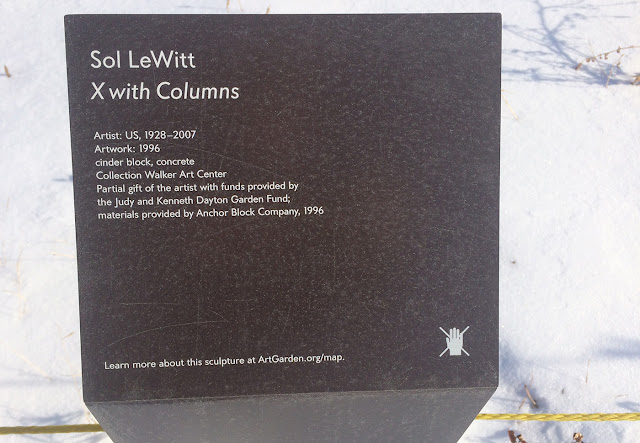 Specifically, an X with columns, says its plaque. You can catch a glimpse of the blue rooster through the rightmost opening.

The ropes placed around many areas had signs (which I didn't think to photograph) explaining that there were natural plant installations, including meadow plantings, that weren't yet established, so please don't walk on them. It might not have mattered just now, as the ground is surely frozen, but I wanted to honor the signs, even though the snow revealed many footprints of people who did not do so.

The walkway took me from the columns past the iconic Love sculpture that you've surely seen on postage stamps and elsewhere. Interesting how a simple play on typography can capture people's imaginations. Why does the "O" lean away from the "L" instead of toward it? Each person who looks at it probably has their own idea about that. 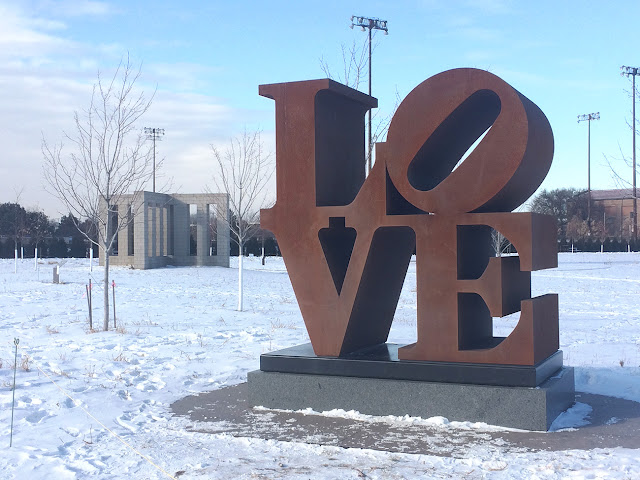 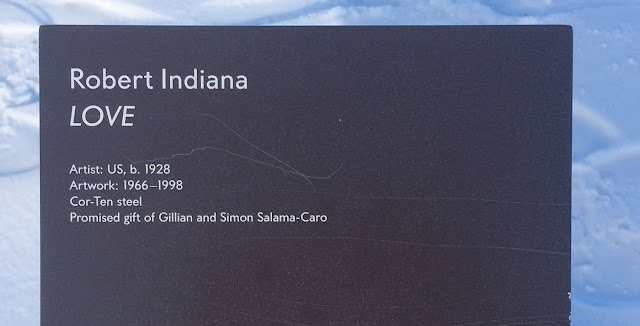 And then there I was at the gigantic blue rooster. 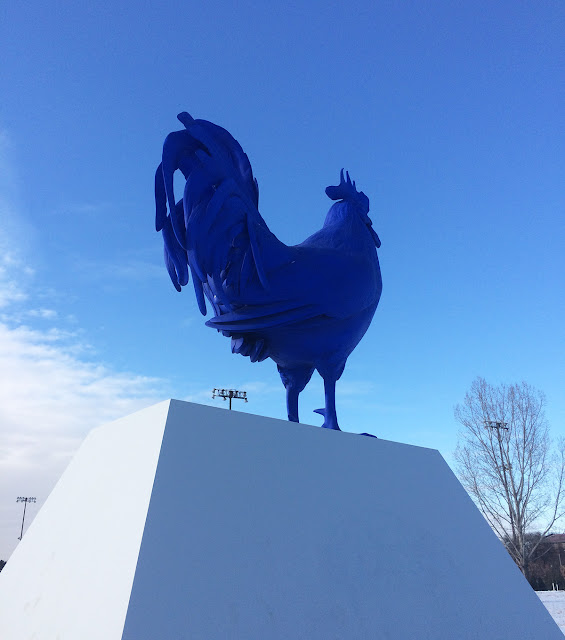 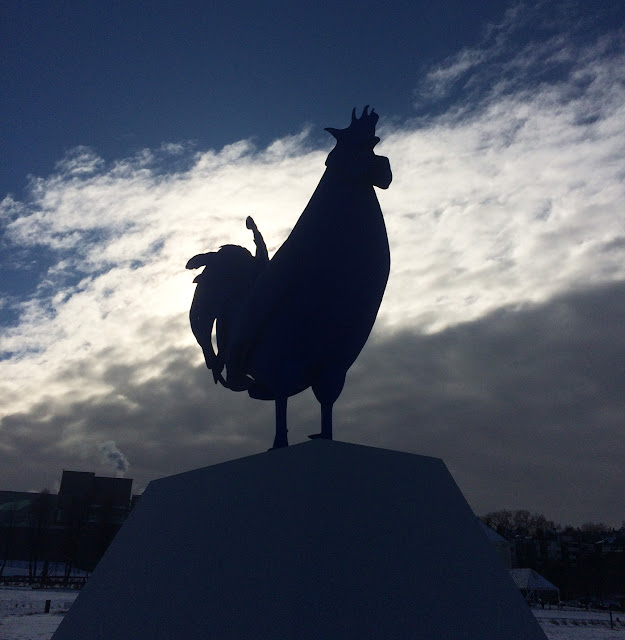 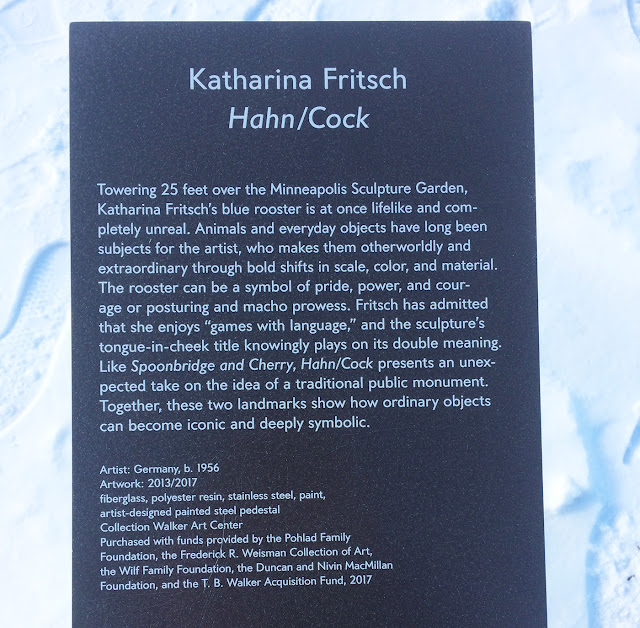 Now the fingers of my right hand really were hurting from all of the times I had pulled off my glove to take a photo, so I went back to my car and headed down Hennepin Avenue to a warm coffee shop. (Spyhouse, on 24th.)

There I did what I should have done in the first place — I emailed the pastor of Central Lutheran and Google-mapped the church's address, switching to the satellite view. I still didn't see anything that looked like a triple-wide trailer (but who knows when the image was captured), but I did see that the parking lot is the one I had assumed belonged to the convention center and not the church.

Pastor Melissa Pohlman soon replied, sorry that I was not able to drop off my donation today, assuring me that, yes, they were still operating the free store, and letting me know where to find it in the parking lot as well as how to enter the lot.

And she said they weren't open today anyway because it was the last day of their holiday break.

Posted by Sharon Parker at 12:53 PM No comments: Links to this post