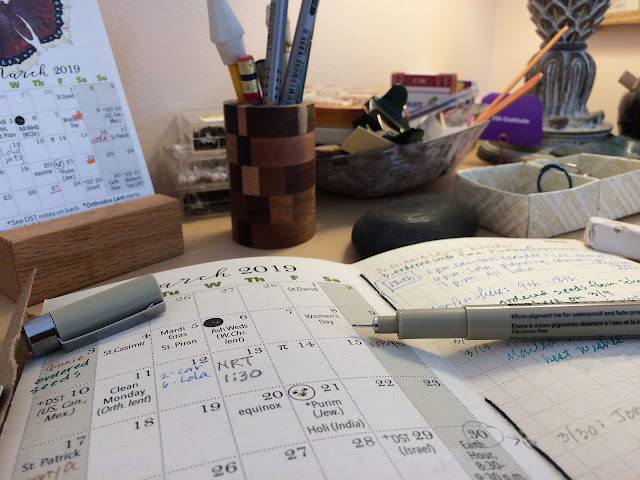 I've taken to jotting appointments and dates on a pocket calendar, and then later adding them to the  calendar on my computer, rather than entering them via my phone when I'm scheduling them. Although, honestly, I find myself using the calendar app less and less as I have gotten used to going back to paper.

Writing stuff down first with an actual pen on an actual paper calendar is working better for me. First, because it's quicker and easier to do it that way than to enter the pass code on my phone and then open the calendar app and then enter the info into the form—even when the process is not interrupted by a reminder to update my software. And, second, sometimes the phone auto-fills the wrong information; or I discover later that there's no reminder when I was sure I had set one up; or I am unable to find the appointment on my electronic calendar at all.

It also seems like I remember things I wrote down better than things I noted via device; so I was pleased when I came across some research supporting that claim.

Studies comparing these two methods of recording information suggest that writing by hand really does improve learning and recall, even without all the distractions and annoyances I experience using my devices.

Neuroscientists say that our brains are engaged more and in different ways when we write by hand, and this brain engagement helps us to learn and remember things better. For example, a study in France found that children who were taught letters while writing them by hand, later recognized them better than a group of children who learned their letters on a computer.

Those same scientists repeated the experiment on adults, teaching them a new language that used a different alphabet, and again found that the adults taught by way of handwriting remembered more than those taught by computer. (This and other fascinating research is reported in The Guardian in this December 2014 article.) 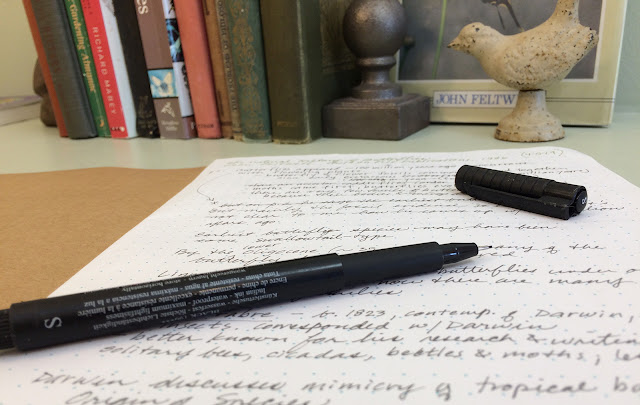 Meanwhile, at UCLA, two psychologists tested college students to find out whether taking notes by hand affected learning and recall differently than using a laptop. They, too, found that students performed better on tests after a lecture if they had taken notes by hand. They tested one group of students (divided into a pen-and-paper set and a keypad set) shortly after the lecture, and another group a week later, allowing time for study and review. In both instances, the note-writers did better than the typers; and the group tested a week after the lecture showed an even bigger difference favoring the notes-by-hand technique.

The way that these studies were conducted suggests that the participants did not have to deal with all the little distractions and annoyances that I stumble over when I attempt to use electronic devices for jotting appointments and notes, and yet they still found an advantage in taking notes by hand.

While none of these researchers is suggesting that we go full luddite and abandon our electronic communication devices altogether, their findings do make the case for also using our pencils, pens, and paper notebooks and calendars. Think of them as exercise equipment for our brains—and as the ultimate backup devices, provided you remember where you put them.
Posted by Sharon Parker at 2:31 PM