You Can Have Your Willpower, I’m Baking More Cookies

Isn’t it interesting how sometimes seemingly disparate parts of our lives intersect one another, like a Venn diagram? Things that we probably would have never connected come together and offer clarity where before there had been only obfuscation. This has happened for me recently with the surprisingly overlapping topics of a children’s story, my failed efforts in the past to lose weight through dieting, and my recent experience with the Feldenkrais method. At the center of all that is the misguided notion of willpower.
I'll begin with the children’s story. 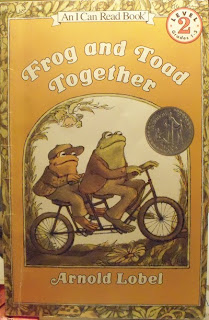 When our kids were little, we used to read the Frog and Toad books by Arnold Lobel. The stories are always about the friendship between the title characters, as they confront very ordinary problems together, things that we all deal with every day, and so gently encourage us to be more forgiving of our (and others’) shortcomings.
One of my favorite Frog and Toad stories is the one called “Cookies.” In it, Toad bakes cookies and brings them to Frog’s house to share with him, and soon they find themselves eating and eating the cookies, seemingly unable to stop. “We need will power,” says Frog.
“What is will power?” asks Toad.
“Will power is trying hard not to do something that you really want to do,” says Frog. 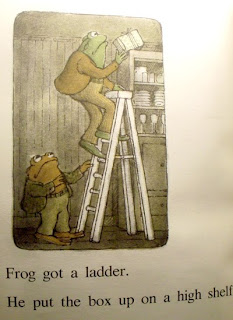 So they try to stop themselves from eating all the cookies by putting them in a box, tying string around the box, and putting it up on a high shelf; but each time, they realize that they can still get at the cookies to eat them if they want to. So, finally, Frog takes the cookies outside and feeds them all to the birds. Toad laments that all the cookies are gone, but Frog assures him, “Yes, but we have lots and lots of will power.”
“You may keep it all, Frog,” says Toad. “I am going home now to bake a cake.”
I always thought that story offered a pretty good explanation for why dieting doesn’t work! Who can sustain that constant effort? I know I never could. I have lost many pounds by using willpower to restrict my calorie intake, but eventually I got tired of the effort and slid back into old habits, and always ended up gaining back more than I lost. I quit dieting a long time ago, and eventually quit gaining weight. In fact, my current weight is about 30 pounds less than it was two years ago, despite my refusal to restrict my calories through dieting.
I thought about that story recently when the topic of willpower came up at a Feldenkrais lesson. My Feldenkrais explorations have expanded beyond my knee to developing an awareness of how I carry tension in my back and shoulders and neck. And whereas I pretty quickly got the hang of relaxing my back whenever I notice that I’m arching it, and so have largely eliminated the low-back pain that used to plague me, I was having trouble doing the same with my shoulders.
“When I notice I’m arching my back, I can relax it into a better posture,” I explained to Nick Strauss-Klein, my teacher. “But I find I have to push my shoulders down.” He responded with a knowing nod, like he encounters this sort of thing all the time. The rest of that lesson focused on my neck and shoulders, and one of the things he did was ask me if I could let my neck be long, rather than direct my attention to my shoulders.
That helped a lot, and although the hunched-shoulder posture is still a very persistent demon of mine, I at least have a more successful strategy for addressing it. When I reported this back to Nick, he said something that made me think of the Frog and Toad story—in essence (I didn't write down his exact words, of course):
“Moshe Feldenkrais said that whenever we try to make changes through effort and willpower, it’s much harder to sustain.” 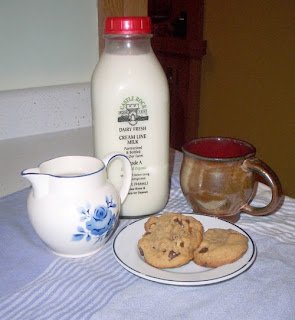 Frog and Toad went to a lot of effort to try to not do something, and I think that’s a pretty good definition of willpower. They couldn’t sustain it, and neither could I. But just as the two friends couldn’t force themselves to be satisfied with the cookies they had already eaten, I can’t force my shoulders to relax.
A dieting mindset is one that focuses our attention on what and how much we should not be eating: Cookies and other sweets are taboo, as are high-fat foods like whole milk and butter. I always found that it encouraged me to obsess over those kinds of foods, which made me want them more—you know, the lure of the forbidden—and to feel bad about eating them, and weary from the internal battle over trying hard not to do something I wanted to do, or thought I wanted to do. So, just like Frog and Toad, I kept eating more, seeking the pleasure that the cookies are supposed to provide, and faulting myself for lacking the willpower to resist eating them. I got all of the calories and none of the pleasure.
When I quit dieting, I stopped focusing my attention on what I thought I shouldn’t eat. And when I quit choosing low-fat versions of foods that are naturally high in fat (like dairy products), I also stopped feeling the urge to eat more and more in pursuit of the elusive pleasure that whole foods naturally provide. Even though I’m not dieting these days, and I’m including high-fat foods as a regular part of what I eat, I’m consuming fewer calories while at the same time feeling more satisfied.
And that’s almost enough to make me relax my shoulders. Almost.
Posted by Sharon Parker at 8:24 PM