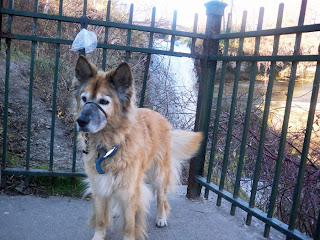 I've been taking Feldenkrais lessons since spring, but it looks like I haven't yet written about it on this blog. It has made a big difference in my life, and it's high time I said something about it. For one thing, it has allowed me to resume my daily walks with our dog, Brigit, a routine I had given up sometime last winter, when I realized it was making my bad right knee worse, and frequently had me limping painfully by the end of the walk. The dog is especially happy that we have resumed these walks, since nobody really picked up the slack when I left off.

Feldenkrais is described by its practitioners, who call themselves teachers, as "somatic education." I first learned about the method about a year ago from an article in the magazine my husband edits, but wasn't able to find a local practitioner until last spring, when a Google search lead me to Nick Strauss-Klein.

My knee problems stem from an injury more than 30 years ago and subsequent surgery to remove a torn medial meniscus. About ten years after I (and tons of others) had the surgery, orthopedists said, "What were we thinking?," and stopped routinely removing torn menisci.

Lacking this rather crucial body part, my knee has kind of collapsed on the side where the meniscus should have been, resulting in bow-leggedness and osteoarthritis, with a few bone chips in the mix. The bone chips may have resulted from my misguided attempts to take up jogging, likely causing excessive grinding where the bones meet. I didn't realize how bad it was getting until my husband watched me one time and told me that my knee actually wobbled a bit from side to side with each step. I quit jogging after that, and cut way down on walking, fearing that I was doing damage to myself with every step.

Last spring I finally sought out an orthopedist for the first time since the surgery, hoping for a referral to a physical therapist and maybe some recommendations for ways that I could be more active—like some sort of knee brace that would prevent the wobble so that I could try jogging again, or at least walk more.

He took an X-ray and observed me walking and offered the insightful diagnosis, "That is one messed-up knee." He then asked me a few questions that hinted at a certain incredulity that I could walk at all, that I wasn't in a great deal of pain all the time. I'll admit that I took a certain pride in this line of questioning, because I thought it suggested that I must be pretty tough.

He said I had two options, then changed it to three, which encouraged me for only a moment: knee replacement surgery (no surprise there), doing nothing, or getting an expensive brace that would hold my leg more or less rigid, to straighten out the leg and correct the bow-leggedness, at least while I was wearing the thing. It sounded like the equivalent of putting my leg in a full cast, albeit a removable one; a device that would hardly facilitate my desire to be more active.

So, remembering the article about Feldenkrais, and my failed attempt to find a local practitioner the previous fall, I decided to do another search, and this time found Mr. Strauss-Klein, who, together with his wife and two sons, had just moved into the Twin Cities area. I started seeing him in April, and have gone for "lessons" several times a month since.

What I've been learning, to put it simply, is what that old folk/gospel song "Dry Bones" tells us: The knee bone's connected to the ankle bone, and the hip bone, and all those other bones right on up to the rib, neck and shoulder bones. Over thirty years of coping with chronic pain and instability, I'd become very rigid, and that rigidity meant that my knee was taking the bulk of the impact of every step, rather than allowing it to reverberate upwards and throughout my body. During one lesson, Nick explained that our ribs act as shock absorbers—except mine. They were acting more like cinder blocks.

So the lessons involve roughly two things: helping me become aware (but without judgment) of the habits I've developed that are aggravating my problems, and helping me find different ways of moving that are easier, gentler on my knee, and more graceful. Sometimes, the different ways of moving involve intentional actions on my part—learning to let my arms swing more freely and my pelvis rotate naturally. Sometimes it involves him gently poking me in the ribs, for example, or pulling or pushing on my arm or leg, in an attempt to, as he puts it, ask my brain a question, or offer it a suggestion. Unlike massage therapy, a Feldenkrais teacher doesn't try to complete the process through external manipulation. Rather, he leaves you a little bit hanging, allowing your brain to chew on it a bit and find the best solution. This results in a more sustainable change, even if it's sometimes a bit disorienting. If you've ever left a great massage session only to have your muscles become tight again the next day, you'll appreciate the difference.

Yesterday when I was out walking Brigit, it suddenly hit me that I wasn't limping. A slight limp had become such an integral part of my walk, that this was quite a realization. Even near the end of our walks, which are typically about a mile and half long, I'm not limping. If I start to experience knee pain, and I sometimes do, I ask myself, "What can I do differently?" and then try shortening my stride, or slowing down, or turning my right foot slightly out (I used to turn it inward), or even swinging my hips a little more, and one or several such changes solves the problem. Whereas a year ago I would have thought I had blown it and walked too far, and felt very discouraged and defeated, now I have options.

I won't be taking up jogging any time soon (or probably ever), but I'm enjoying getting out on these beautiful autumn days and exploring on foot the parks and woodlands so near my house, and I can tell that Brigit enjoys it too. And I feel very optimistic that it's only going to get better, and that I'll be a happy and grateful perambulator for many years to come.
Posted by Sharon Parker at 8:41 PM