Last June, before we actually closed on our purchase of this house, I stopped by with a handful of Popsicle sticks and a Sharpie to label the peonies along the south side of the then-empty house, noting  the color of their blossoms. I reasoned that by the time we moved in, their petals would have long since dropped and withered and I wouldn't know which were pink and which were white, and I thought I might want to dig them up and move them in the fall, with an eye to some to-be-determined color schematic. 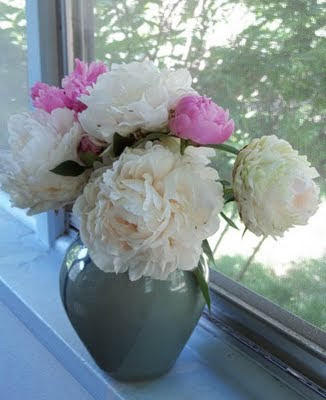 But our house offered plenty of projects to keep us busy and I didn't get to the garden at all last summer. That's just as well, because it allowed me a full growing season to observe and photograph the garden. Among the things I observed was that nearly all the peonies were afflicted with splotches on the leaves and spots on the stems, most likely caused by one of several fungal diseases of peonies, especially if their spent stems and leaves are left to rot in place over winter. It also looked like some of the buds had failed to open at all.

Not remembering the blossoms themselves as anything special, only that some were white and some were a medium pink, I had pretty much decided they weren't going to be worth the bother and that I would just discard and destroy the plants and start over, planting new ones in a different location to avoid infecting them with the same problems.

Then they bloomed, and I was smitten. As I hope you can see from the photos, the "white" ones are really a very pale pink, and their blossoms are so full of petals that even after dozens of the petals fell to the floor when I was rearranging them for the picture, they're still large and voluptuous flowers. And of course they smell wonderful, as do all peonies. A Google image search has me thinking these are probably Peony Annisquam, a 1951 introduction, and available from a Minnesota nursery, Hidden Springs Flower Farm. Since Julia Johnson had tended this garden from the 1950s on, and, from what I have learned from her children (who sold us the house) and our neighbors, was a pretty sophisticated gardener, it's likely she would have bought a few stylish new plants to enhance her yard. At today's prices, the several specimens that grow alongside the house would cost me $25 each to replace. I think I'll keep them.

Even the "ordinary" medium pink ones are, of course, beautiful and fragrant. How could I have thought I could so cavalierly discard them? Besides, ridding peonies of a disease such as this is pretty straightforward and amounts to nothing more than a few good cultural practices: adequate sun and water, good drainage, good air circulation, and—especially important in this case—a thorough cleanup of all plant debris in the fall.

Since I want to move them anyway, preferring a good swath of prairie next to the house (the reasons for which will be the subject of another post), I'll do so in September, a good month for dividing and planting peonies. When I do, I'll rinse the roots to remove the soil, which likely carries the spores of whatever is infecting them, and plant them in fresh soil amended with compost and manure. And as soon as the first frost zaps them, I'll cut all stems off at the soil surface and discard them and all the leaves (or, more likely, bury them at the bottom of a hugelkultur bed). I have treated similar peony problems this way before and did not have to do anything more, except to continue to remove the plant debris after frost.

Peonies are extremely long-lived perrennials, and I'm looking forward to many years (decades, really) of these luxurious flowers. It's also sweet to imagine that long after I'm gone, those peonies will still be here to delight future occupants of this house.
Posted by Sharon Parker at 2:57 PM