A poppy pops up most unexpectedly, and other reports from the late summer garden 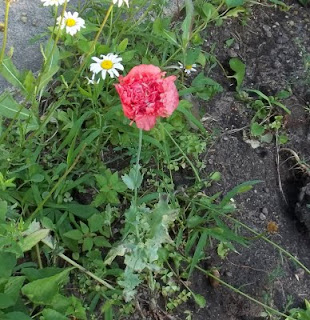 I went outside to bring out some trash this morning and was surprised by this sweet little poppy growing amongst the daisies and thistles next to the sidewalk. It's at the edge of the area that is slated to become our kitchen garden, and I am planning a mixed border, including self-sowing annuals, to run along the outside of the as-yet-to-be-installed picket fence, to attract beneficial insects and serve as a cutting garden for bouquets, as well as to simply look pretty. And here's a cheerful reminder to include poppies in that mix!

I have no idea how it got here, of course. I am pretty certain there were no poppies in any part of the garden last year (though it is possible I overlooked them or forgot). At first I thought the seeds may have come from the compost—mine or someone else's—but I don't think it's breadseed poppy (P. somniferum), that's usually taller and most likely a "single" blossom, not a flouncy double like this one. Perhaps it came from someone's wildflower mix, but how it got here remains a mystery. Birds? A squirrel or chipmunk? One of our many nonhuman gardeners of happenstance, surely. 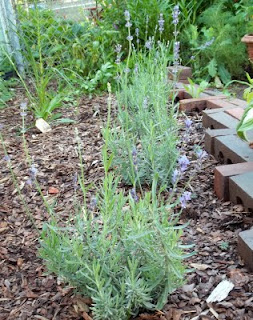 The abundance of rain during this heat wave has certainly taken the edge off, at least for the plants. The lavender seems to be thriving, as you can see here. I envisioned something of a mini hedge of lavender when I planted these four earlier this summer. Even the most hardy lavender is only marginally so in Minnesota, though, so it remains to be seen if it will come back in the spring. It is currently on the west side of the garage, but I am thinking of moving it once I have some of the other gardens prepared. But digging new garden beds is not a project for 90-degree days! 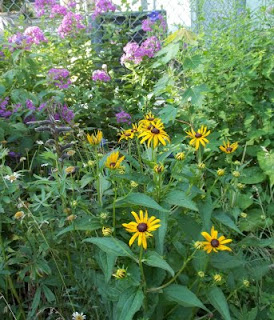 The black-eyed susan and garden phlox are just coming into bloom. They, too, are slated to be moved, probably to the south side of the house. My current "plan" (more like an idea than anything so organized as a plan, really) is to have a wide strip of tall sun-loving perennials, both native and cultivated, all along the south side, except where the faucet and air conditioner are. I need to build up the soil a bit there, to get that gentle slope away from the house, and then plant deep-rooted plants that won't require supplemental watering most of the time, but will seek the moisture way below the surface. I'm envisioning something of a cottage/prairie garden hybrid, with some of those taller prairie forbs and grasses to the back, and the not-quite-so-tall cultivated perennials in front of them. Or something like that. That's a September project, though, when it's safe to move the peonies, which are the only plants (other than weeds) growing there now.

It definitely helps to be in no big hurry to get these various gardens installed, because my ideas have evolved over the past year as I've observed what's going on all around the property, where the sun shines most, where the rain water tends to puddle, and so on.
Posted by Sharon Parker at 1:34 PM