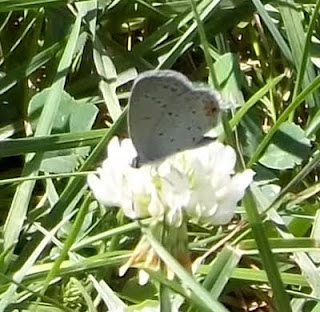 I was out in the backyard today when tiny pale blue wings fluttered by. I had my camera handy, so I grabbed it and took some shots as the lilliputian butterfly flitted about among the white clover in my lawn. I know there are a few types of blue butterflies in Minnesota, all of them with a wingspan no bigger than about an inch, and so easy to miss unless you're keyed in to spotting pretty little things. Maybe I'm even a little obsessed with them; I think they're adorable and will make a point of planting their favorite flowers to encourage them to stick around.

All the blues are small; in fact, the tiniest butterfly in the world is the pygmy blue, native to the American Southwest, according to Stokes Butterfly Book. Its wingspan is less than a half inch. 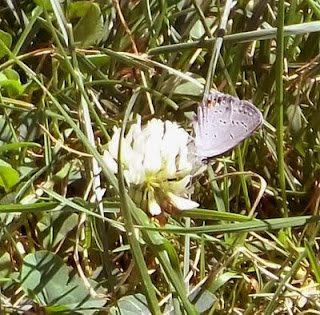 The upper side of the wings is the blue part, a pale almost lavender color that you only glimpse as it flutters about.  This guy would not spread his wings when he perched on the clover, so all I could get is a shot of the underside of the folded wings, which is more silver, with distinctive spots. But that's how you identify them, so he was actually being helpful. See the hint of orange in the two splotchy spots near the base of the wings (you should be able to click on the second photo to get a larger view; it doesn't look as orange in these photos as it did in real life), and the two rows of black spots with white margins, and (this is really hard to spot) the really tiny threadlike "tail" by the not-quite-orange spots? All those markings identify this guy as a male Eastern tailed blue. (And you thought I was being sexist, didn't you?) The females don't have the orange spots and aren't as blue.

It won't be hard to provide both nectar and larval plants for these and the other blues—silvery blue and spring and summer azures are also found in Minnesota (and far beyond, of course). They all like legumes, such as clover, vetch and alfalfa, for both caterpillar food and nectar. The silvery blue also likes lupine and dandelions, and the spring azure goes for dogwood, wild cherry, and meadowsweet. (I believe that's the wild spirea, S. alba, although some sites that came up on a quick search say it's filipendula; that's why I often find common plant names a bit annoying, even if they are more poetic than their scientific counterparts).

Eastern tailed blues also like to take nectar from goldenrod, asters, fleabane, white sweetclover (that's our native clover) as well as the Dutch white clover often growing in lawns and pictured here. Did you notice how many of those plants are common weeds that many people work very hard to get rid of?

It's good timing on the butterfly's part, since I am in the process of planning the gardens; a delicate reminder to remember all the butterflies that may find their way to my yard, and not just the big showy ones (I already have a few species of native liatris planted to please the monarchs).
Posted by Sharon Parker at 4:51 PM