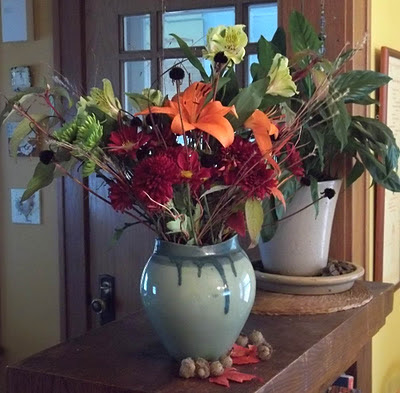 The flowers in the house challenge today, being Halloween, was to create something goth, or at least Halloweenish. And when I peeked late last night at the blog page of the instigator of this monthly blog crawl, I was truly amazed, inspired, and intimidated.  If you haven't been to see Jane's "Flowers in the House of Horror" yet, you really must. And from there visit all the wonderful blogs sharing their exquisite arrangements.

By comparison, mine is the floral equivalent of throwing a sheet over your head with a couple of eye holes cut out before heading out to beg candy from the neighbors. Oh, well, we do what we can with our limited resources and talents.

I went out into my garden yesterday evening and gathered several black-eyed susan seedheads, as well as some dogwood stems trimmed from my newly planted little shrub, a few grasses, and twisty willow twigs—from the corkscrew willow stems I put in my front step urn last fall, which sprouted in the spring, and which I finally planted in a big old whiskey barrel on the south side of the house a couple of weeks ago, because I don't want a monstrous willow taking over my yard, but I hated to just get rid of them. I figure this way I will have a source of cuttings, and if it doesn't survive the winter in a barrel, well, I'm none the worse for having tried. But I digress.

I combined these garden gleanings with a few of the dark red mums I have in a pot on the patio, and the flowers that were still good in a bouquet that a friend brought over last weekend (another form of gleaning), which included some orange lilies and more dark red mums and green mums and a few greenish alstromeria, which I figured were all the right colors (I dumped the ferns; I do have some aesthetic sensibilities). But now I see that all those flowers overwhelm the twigs and seedheads that would have given the bouquet a more Halloweenish flavor. I probably should have made two bouquets.

But, no time for that, I need to go grocery shopping, and I haven't even been to the store to stock up on candy for the little darlings who will come to the door yet. Horrors!
Posted by Sharon Parker at 10:17 AM 6 comments:

Why late fall in Minneapolis isn't so bad 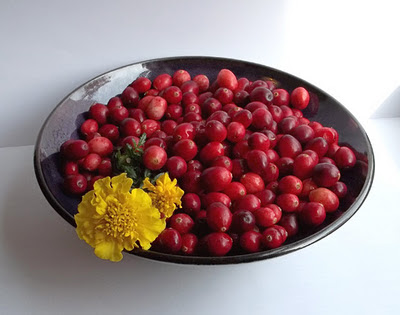 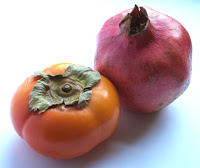 At the co-op: fresh cranberries from Wisconsin. And organic pomegranates and persimmons have recently arrived from points south, their season just beginning.

Yesterday, I was working in the garden. My neighbor came round to her backyard from the side with a sunny clump of marigolds in her hand, the roots and dirt still attached, and said that they looked so pretty she almost hated to throw them in the compost, but she didn't think they would overwinter in the ground.

"Put them in a pot on the front steps," I said.

"I'm not that ambitious," she said.

"Then at least take cuttings for a bouquet," I said

As we were talking, a cedar waxwing landed on the fence. "A cedar waxwing!" I said. I was surprised and delighted because I hadn't seen them in the city before. "Oh, yeah, we get flocks of them this time of year," she said.

Later, as I was biking across the Ford Bridge, coming home from Saint Paul, I stopped and stared at a red cedar tree—it was alive with cedar waxwings. The pretty little birds' tawny yellow wingtips flashed brightly as they flitted about amongst the green needles eating the blue juniper berries.

This is why I love living so close to the Mississippi River, a major flyway for migrating birds. 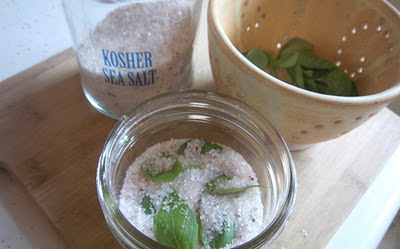 My friend Marsha taught me this method of drying herbs: to immerse them in kosher salt until they are dry, then remove the leaves but don't worry about the small bits left behind. So you get your dried herbs and a seasoned salt as well. I think the reason for using kosher salt is because the iodine added to processed salts can discolor the leaves, but I'm not really sure if that's it. Since I'm using kosher sea salt to dry the last of the basil from my garden, and sea salt retains its naturally occurring iodine, I may find out. But I prefer sea salt because it's prettier than the plain white kind. (Even though I know that it's also supposed to be lower in sodium and higher in other trace minerals and more flavorful than regular white table salt, the real reason I buy it is because it's pretty.)

Last summer, after we bought this house, Marsha brought us a gift of a loaf of bread and some salt she had seasoned with rosemary, and a lovely card in which she had written this note:

Gathering nectar while they can 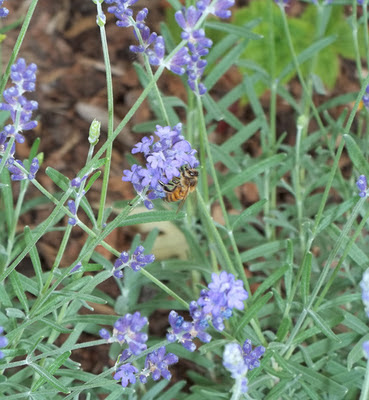 The bees and the skippers sure have been loving the lavender this fall.
Posted by Sharon Parker at 9:11 PM No comments:

I've been noticing that everyone's being kind of wistful these days. Such beautiful weather in October inspires a very different response from northerners than the same weather when it makes its first appearance in May. Then, we felt great relief and excitement; now, we feel wistful. It's no less a pleasure, I think, it just has a different context. 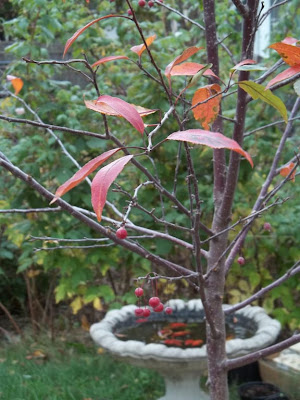 My new Prairiefire flowering crabapple was looking so pretty yesterday, with its leaves turning an unusually lovely shade of red for that species; and already today the wind has blown nearly all of them away.

Some landed in the birdbath. 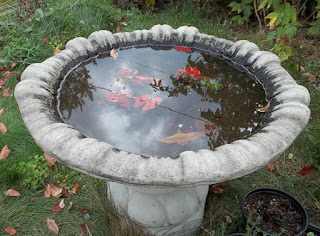 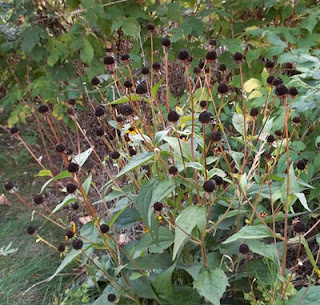 The black-eyed susans have dropped their cheery golden petals, but still look handsome with their healthy foliage, round black seedheads, and colorful stems. 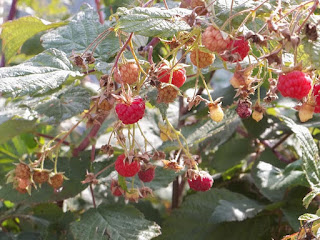 The fall raspberries offer just enough fruit for my yogurt in the morning. The canes are dreadfully overgrown, I need to cut them down and purge the unproductive ones—for some reason, there's a large section that just won't bear fruit, both on our side of the fence and our neighbors. Our neighbors Bonnie and Joe removed the ones on their side, and I need to do my part so that mine don't re-colonize their much tidier raspberry patch. For raspberry work, it needs to be cool enough to wear long sleeves, so I keep saving that one for later. I think "later" has come to now.

Besides the raspberries, there's still much to do in the garden. We need to tidy up the garden beds we've started but won't be planting til spring, cutting ditched edges with our spades and covering the exposed soil with woodchips, which we fetch by the carload from a spot where the city's forestry department dumps it for residents' use.

The kitchen garden has been fenced and boxed, but it needs the center leveled and covered with class 5 gravel, for a firm base under either a thin layer of pea gravel or pavers of some sort. The center, being too small for another raised bed but much larger than needed as a pathway alone, will be more like a small garden plaza, as I imagine it. I plan to have spaces held open to plant perennial herbs by placing plastic flower pots with the bottoms cut off here and there before spreading the gravel. I have a lovely image in my head for this; it remains to be seen whether I can pull it off.

And the many perennials that have been trying to get by amongst the raspberry canes need to be transplanted to the not-quite ready beds along the south side of the house.

I do hope the forecasts of a long, mild autumn prove true! 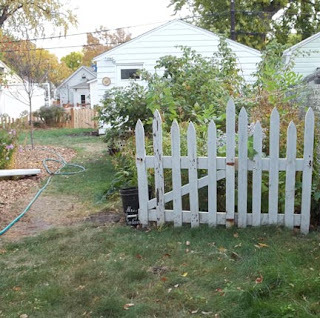 Posted by Sharon Parker at 1:48 PM No comments: 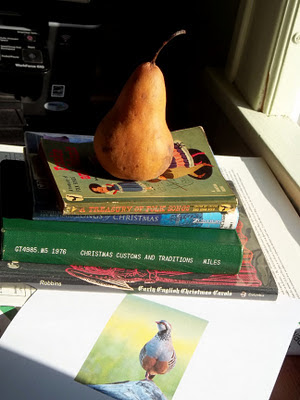 Here's what I'm working on these days, hoping to complete a self-published chapbook or zine about "The Twelve Days of Christmas" for the Nokomis Urban Craft Fair on Nov. 12. It's a little research-and-art project I began five years ago, keep returning to each year at Christmastime, then realize I started too late in the season to do anything with it for that year, and leave off. This is earlier than I've started on it before, and I've got all that earlier work to build upon, so I just might get it completed in time this year. (If not for the Nokomis event in November, then before the next craft sale I plan to participate in, on Dec. 3).

I'm envisioning it as a kind of compendium, a compilation of lists and trivia and drawings. I'll let you know how it goes. 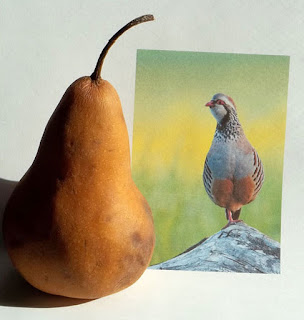 I'm gathering visual references as well as information, hence the partridge and pear.
Posted by Sharon Parker at 4:03 PM No comments: