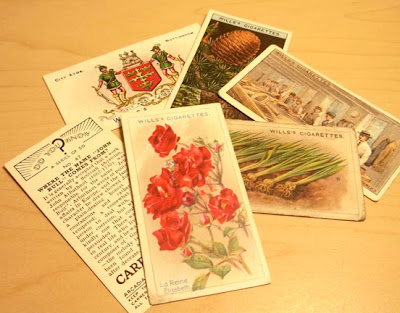 Among the vintage ephemera that I have amassed over the past few years are a few small trading cards from Wills's Cigarettes, which have exquisitely crafted full-color images on one side and interesting trivia on the other, all framed with convenient little mentions of the sponsor's name. There's also a notice, in very tiny print in the margins, that you can purchase an album for displaying the pictures from any tobacco shop, for one penny.

Those cards are English (as in UK, that is), and I don't see a date on them, but a quick check on the Internet tells me that they were issued during the late 19th/early 20th century, and that complete sets of some of the series can be quite valuable. 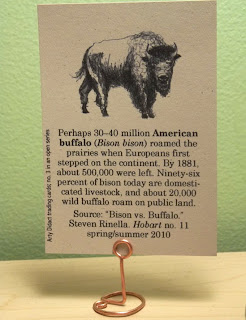 In the book, Minnesota on Paper: Collecting our Printed History, authors Moira and Leo Harris write that trade cards reached the height of their popularity in the U.S. in the 1880s, and that, at that time, "the trade card was truly the most ubiquitous form of advertising in America."

And I, for one, can certainly understand the appeal of these little cards. As a maker and trader of ATCs (artists' trading cards), I am attracted to the artistry, the trivia, and the small format of such cards, although ATCs aren't quite as small as the Wills's Cigarettes cards; Wills's cards measure about 1.5" by 2.5" and ATCs are 2.5" by 3.5".

Little cards with art and information appeal to my arty didactic little heart. So, naturally, I thought I'd make some of my own, to promote my Etsy shop, of course, and, also, just for fun.

But because the cardstock I have that's heavy enough to make nice trading cards comes in a light brown color described by the folks at the Wausau paper mills as "driftwood," I thought it would look better to stick with black line art. And, besides, I already have ink drawings of animals, and some interesting trivia to go with it, which I made into note cards a while ago (and which are available for sale in my Etsy shop—here's the note card section, fyi).

If you'd like to get a set of four Arty Didact trading cards (the size of ATCs—2.5"x3.5") for free (I'll even cover the postage!), use the envelope icon below to send me a message with your mailing address. I'll even throw in a couple of extra bits of Arty Didact original and unique ephemera while I'm at it. And if you want to be notified of art events that I'll be participating in (in Minneapolis/St. Paul), say so when you send me the message. If you don't request it, I won't mail you anything else—because I have no interest in wasting money just to annoy you.