14 Things about Valentine's Day, No. 2: Medieval Romances and a Popular Name 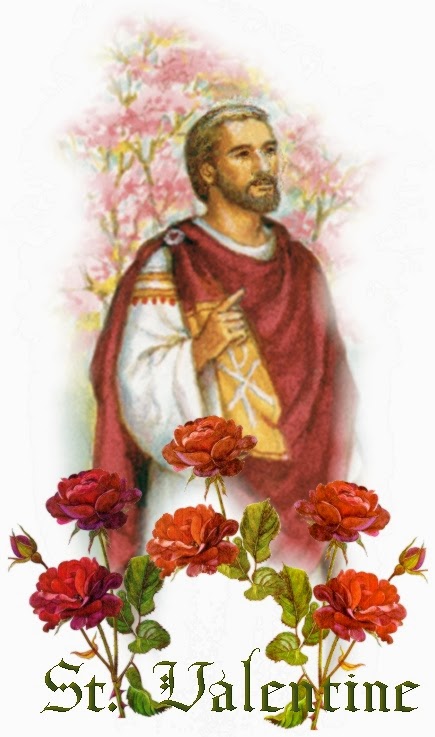 The name Valentine is derived from Latin valere, to be strong, and was popular in the late Roman empire. Several emperors and a pope were so named, and more than 30 Valentines (and a few Valentinas) were made saints, having been martyred for their faith, although the two mentioned in yesterday’s post were the most prominent, and the only ones to have made it into the Dictionary of Saints. The name was also popular in the middle ages, and members of the nobility would often name their sons and daughters Valentine or Valentina simply because they thought it to be a beautiful name.

Surviving stories about the lives of our two Saints Valentine were written in the 6th or 7th centuries, explained Professor Jack B. Oruch in a meticulously researched article published in the journal Speculum in 1981.* And the scribes who wrote them down were not so concerned about historical accuracy as they were about telling good stories that illuminated the great sacrifices made by the Christian founders, and to uphold the mythic traditions that had formed around this relatively new religion.

It’s not that they were trying to deceive anybody, it’s just that they didn’t want to spoil a good story for want a few facts. If there were any court records of the trials and punishments of these saints, they were long lost, so the scribes tapped oral tradition and took some liberties regarding who did what to whom, mixing it all up into a tantalizing literary stew that illustrated the greater truths they were most concerned with—that the saints performed miracles of healing, effected conversions, suffered martyrdom for their faith, and were rewarded by God. None of which had anything to do with love, romance, or marriage.

But there was a whole genre of medieval literature emerging from the courtly love tradition that was all about love and romance —and heroism. You know the sort: knights in shining armor going on daring quests and rescuing hapless high-born damsels from fiery dragons, and all that. These are collectively referred to as romances, because they were thought to have stemmed from Roman storytelling traditions.

And in a collection of these romances associated with the Carolingian era in France (9th–10th centuries) were stories about a hero named Valentine. Professor Oruch summarizes the story like this:

“In the romance story, Valentine is of noble birth and grows up to perform deeds of valor, falls in love, wins his lady Clerimonde, and after many adventures kills his father in battle by mistake. For his unintentional crime, Valentine does an extremely long and difficult penance, living away from his beloved wife in utter poverty and humility; as a result, he dies a holy man, causes the sick who visit his tomb to be healed, and is soon made a saint.”

In describing the grief Valentine’s widow expresses upon learning of his death, the story emphasizes his virtues as a lover and husband. But, says Oruch, the part about him being made a saint wasn’t in the original story; it was added much later.

And nowhere is this romance associated with a particular date in February. But it does offer a glimpse into an association between the name Valentine and traditions of romantic love eventually connected to it.