Letter writing month — April? February? Or how about whenever?

Earlier this year I got all jazzed about a letter writing challenge called a Month of Letters in February, promoted by Mary Robinette Kowal, encouraging people to send some correspondence every mailing day that month. She led a real cheerleading campaign via a Facebook page throughout the month, and has since taken an understandable break, with no new posts since March 1. 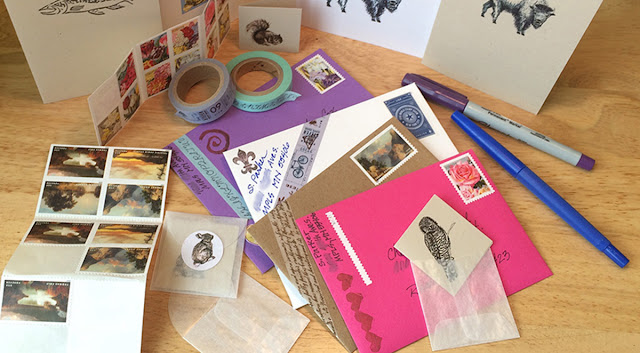 And I really got into it for a while, especially since Valentine's Day is a natural occasion for sending cards in the mail, right? I even got out some rubber stamps and washi tape I hadn't used in a long time, bought an assortment of postage stamps from USPS online,  embellished the envelopes, and had fun with it.

I did my mailing in clumps, skipping days and then sending several things at once. I didn't keep track of whether I achieved a one-to-one correspondence with mailing days, and in fact I kind of ran out of steam shortly after Valentine's Day. But I did mail a bunch of cards and ephemera, so I felt pretty good about that.

Then I came across something about April being National Letter Writing month, which the US Postal Service promoted last year, issuing some fun commemorative stamps while their collaborator, Scholastic, promoted a curriculum called It's a Delight to Write to encourage schools and families to teach letter writing. Last year's enthusiastic promotion, including a first-day-of-issue stamp kickoff, is followed this year by silence from the USPS, although plenty of others are taking up the cause, as a Google search reveals,  from those who just love to send and receive cards and letters in the mail to companies and makers wanting to sell you stuff for the purpose.

I confess I count myself among the latter. I am a card maker, so naturally I am eager to embrace any occasion for people to buy cards, whether they mail them or not. (The following shameless promotional photo clicks through to the card section of my Etsy shop, btw.) 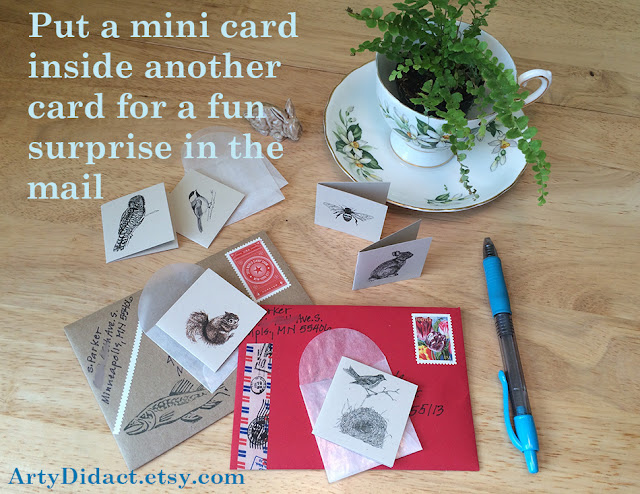 But that whole mail-every-day-for-a-month thing just doesn't work out so well for me. Who really has the time and inclination for such an intense and sustained burst of postal activity?

So I've come up with my own alternative, which I have so far followed only sporadically, because it requires relearning a practice that our mothers and grandmothers followed as a matter of course. It has to do with birthdays and other occasions that once carried a certain expectation of postal correspondence.

For example, you could mail a birthday card with a personal note and maybe a little enclosure, if you are so inclined, on people's birthdays, instead of offering up the Facebook greeting that everyone knows you were prompted to do anyway. What a quaint notion, right?

You'd have to plan ahead for that, rather than rely on the Facebook prompt, and allow for the sad reality that US first class mail now takes 3 to 5 days. I've started by making a list of the birthdays I know, adding them to my calendar and setting up an alert for 5 days before.

I've also found that I can view all the upcoming birthdays on Facebook, and add to my calendar the ones I'd like to acknowledge postally. Here's how: From your Facebook home page, click on "Events," then look in the upper right where it says "Birthdays this week," then click on "See all," and there you will find them all laid out before you. Add what you wish to your calendar to help you remember to mail a card. Nifty, huh?

So far I've mailed one birthday card. Hey, it's a start!

Then there are the once-obligatory thank-you notes. For those aspiring career-hopefuls, it's an excellent follow-up to a job interview, thanking the interviewers for their time and reiterating what you really like about that company you'd like to work for.

But why not also send one to the friend you had lunch with? A little note sent through the mail, saying how nice it was to have lunch and catch up, and how you're looking forward to the next get-together. It gives you the opportunity to pause and reflect on how much you value the other person's friendship, and actually commit a few words to paper about it.

My husband's friend Seth sends him a card in the mail on random occasions — a clipping he came across that he thinks Craig would like, or a photo he took a long time ago that he made into a card. He also sends photos of the two of them after they've had lunch together. These little notes are brief and unexpected and always a pleasure.


There is something kind of luxurious — although it really takes little time and effort; and the cost is minimal — about committing a few friendly words to paper, putting it in an envelope and adding a stamp, and then taking a walk to the nearest mailbox.

I'm not going to challenge you to commit to mailing something every day for a month, or once a month, or for every birthday of everyone you know. Just try it once, and see if it doesn't give you a certain satisfaction. You may even want to do it again. Sometime. Randomly. Without obligation. A moment of slowing down, for both you and the recipient.

Posted by Sharon Parker at 9:07 AM