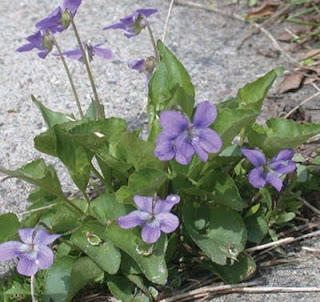 I've been seeing lots of violets lately, in lawns and gardens and the crevices of sidewalks. They appeared about the same time as the dandelions, right after we had a hot day followed by lots of rain. I have no understanding, and certainly no sympathy, for those who consider them such a menace that they'll part with their hard-earned money to have some chemical company come and poison their lawn just to get rid of them.

Amongst the various definitions of insanity,  I'd suggest that poisoning your lawn and, subsequently the birds and other innocent creatures who visit it, in order to destroy a harmless little flower growing amongst the otherwise boring blades of grass really ought to be one of the top ten.

Common sweet violets (Viola odorata) and their cultivated cousins the pansies (Viola tricolor), and also all members of the viola family, are not only pretty, but also tasty mixed in a salad or decorating a cake. They're mildly sweet and, in truth, offer more in the way of edible decor than flavor. One of our neighborhood bistros, Al Vento, has grown pansies in the planter boxes surrounding their patio, and last spring, I remember the waiter snipping a few for the chef, who used them as a garnish with dessert.

Of course, we're not the only species that can enjoy violas as food. Rabbits will happily munch on them rather than on your garden plants, if the supply in your lawn is plentiful. Fritillary butterflies prefer them as larval plants, and recently emerged bumblebee queens appreciate the nectar after their long winter nap—and anything you can do to get bumblebees to stick around will increase the yields in your garden, especially on the tomato plants, which bumblebees pollinate better than any other insect.

Despite their delicate appearance, violets are tough and sneaky little flowers. Hence, all the efforts to eradicate them from lawns eventually fail. They spread by underground runners as well as by seed, which is why they tend to colonize a given area once they get started there. And when they are ready to go to seed, they nod and tuck their little inconspicuous seedheads out of site and near the ground, so regular lawn mowing doesn't even affect them.

They have some medicinal uses, too, though I've never tried to use them in this way. According to this site, the ancient Greeks used them to "moderate anger" and strengthen the heart, and one of the common names for both violets and pansies in old England is Heart's Ease. A delicious bit of irony, when you think of the people so irritated by them that they'll do anything to kill them.
Posted by Sharon Parker at 12:16 AM