This is the corner of our backyard that used to be Julia's garden, but which was a mess of weeds, raspberries and flowers by the time we bought the house. Little by little, I've been moving the various flowers to different parts of the yard, and some of the raspberries to the kitchen garden near the alley, then digging out the weeds. 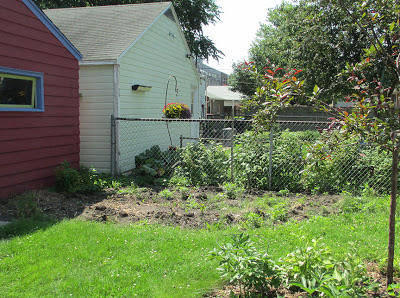 That corner also had a small patio, which our neighbors have told us was where Julia's husband, Harry, used to like to sit. Apparently Julia didn't really use it after Harry died. That patio was too small and too sunny in the afternoon for us, so we took those blocks, plus some other materials salvaged from elsewhere in the yard, to make a patio on the east side of the house, which gets shade by three in the afternoon.

But that patio is too bright and sometimes too hot in the morning, when it would be lovely to take tea and the newspaper outside, so we decided we needed a second, morning patio, and realized that the best spot for that was on the west side of the garage—Harry's old patio spot. We figured that a second patio would also allow space for a fire bowl, which doesn't really fit on the first patio because we have a dining table and chairs there. The whole backyard is shady by about 6:30 in the evening, so either spot is pleasant in the evening. 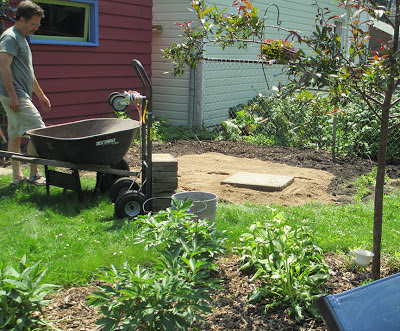 But since it's Sunday and we both want to have a leisurely breakfast and read the paper for a bit before beginning any ambitious projects, by the time we started working on this shady-in-the-morning patio, it was in full sun.

So this is how my husband relaxes on his day off.

After leveling the soil and spreading 15 bags of sand, Craig placed a big honkin' heavy square hunk of cement, which had been sitting by the alley, at a strategic point, which will be where the fire bowl sits.

Then I say, Hey, how about edging that with some bricks? Because I'm full of good ideas like that. 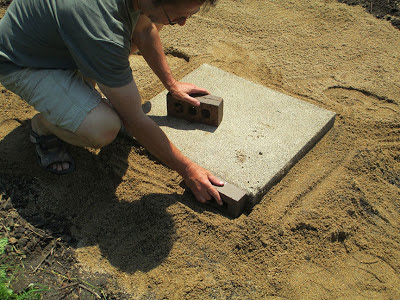 The bricks are a mismatch of some we found here and there in the yard and a few our neighbor was discarding, including this one stamped Purington Paver, which looks kinda like an artifact to me, so I make sure to place it so the inscription will show. (The little square gap will be filled with pebbles or a small plant, I haven't decided yet.) 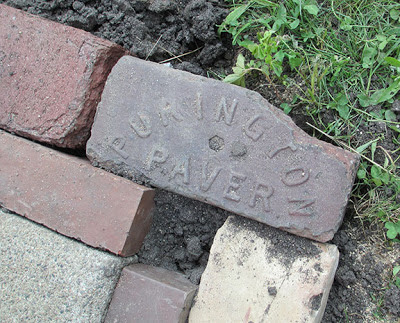 Over the past couple of weeks, Craig has carted about three dozen or so rectangular patio blocks from the house of a friend who didn't want them anymore; we also collected a few discarded blocks from our neighbor. So we started arranging them in a sort of herringbone pattern. (Yes: "we"; I did help, I'm just not in any of the pictures because I was taking them.) Then, at this point, I say, I think it all needs to be moved about a foot or so to the left. Because I'm helpful that way. 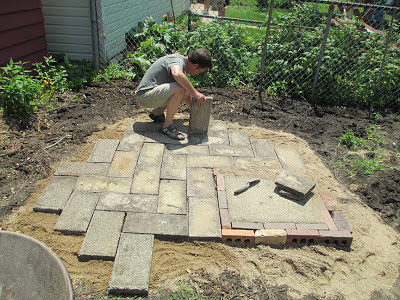 It's just that we needed a little more space between the fire bowl and the chairs; and it did soon occur to us that we could just move the big square far enough over to insert another row of the rectangles, rather than move all of them. 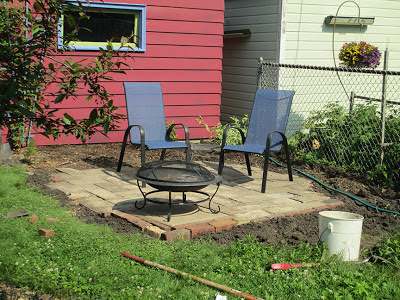 It's about four in the afternoon when Craig puts the finishing touches on the new patio, and sits down to take a little break. 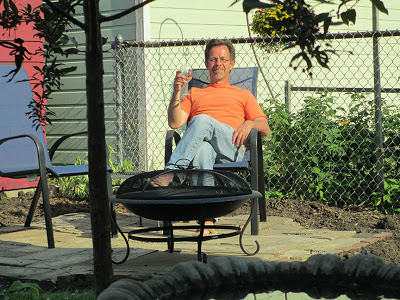 But as it's still sunny there, he soon came over to the "old" patio (constructed two years ago) to join me in the shade. Tomorrow morning he'll head off to work and I'll be in charge of trying out the "morning" patio. It's another way in which I'm helpful.