The rules for digging up and transplanting or dividing perennials are pretty simple: do it when they are first emerging, unless they normally flower early in the season, and then it's best to wait until late summer, long after they're done flowering. Or something like that.

But what if it's raining every day and you are still dealing with a big messy weedy patch where a garden used to be, and you really want to transplant all the good stuff as early in the summer as you can so you can clear the rest of it out and get on with doing something else with that corner of your landscape?

Well, then you just muddle along as best you can.

I once asked a Master Gardener if I could get away with transplanting a perennial in the middle of summer, during hot weather. She said, "Yes, if it doesn't realize you're moving it." Gardeners often speak of plants as if they were sentient beings, so I had no trouble understanding what she meant: dig it up in one big clump without disturbing the roots.

This is more easily done with some plants than with others. So when I tried to dig up the fernleaf peony (Paeonia tenuifolia), even as it had flower buds forming, I was dismayed when the roots fell apart as I attempted to lift it from the ground. It was an old peony and was due to be divided anyway, but late May is not the time to divide peonies!

So I performed a little triage, removing all the stems that had flower buds on them and bringing them indoors to put them in a vase, then transplanting about half the plant. I'll transplant the other half too, once I decide where I want to put it. I'm sure I won't see any more flowers on this plant this year, but it will have plenty of time to adjust to its new home and should bloom happily next spring.

The other plant on the verge of flowering that I dug up, with more success, was the dictamnus, or gas plant (Dictamnus albus). After the experience with the peony, I tried a different approach. First I sharpened my spade with a file, then I shoved the spade into the ground all around the plant before attempting to lift it, and as a result I got a pretty intact root clump, dirt and all. It helps that the ground has plenty of moisture in it from all the rain we've been getting.

I was careful to plant it at exactly the same depth as before, but with a hole that was a bit wider than the root ball, then filling in around it with little or no disturbance to the roots. Still, there were a few stray stems, so I cut those off and brought them in to add to the bouquet. I also moved a lily, but that won't bloom until late July or August, so it isn't showing any sign of forming buds yet. 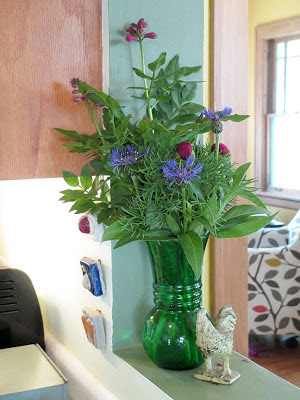 Finally, I took some flowers from the mountain bluet (Centaurea montana), because I plan to move that one soon as well. And a little blue in the bouquet seemed like just the right complement for those dark red buds from the other two flowers.

It remains to be seen if the dictamnus will proceed to blossom as normal. If the flowers show no sign of opening after a reasonable period of time, I will have to cut it all back a bit so the failed buds don't deplete the plant's energy.

My bouquet of mostly closed flower buds is not particularly showy, but I enjoy the understated mix of foliage dotted with blossoms (that is one of the perks of having a fernleaf peony -- the great foliage). And I'm a couple of steps closer to taming the backyard, which is actually worth the sacrifice of a few flowers here and there. Like a good bouquet, a pleasing landscape is more about the composition than about the individual elements contained within it.
Posted by Sharon Parker at 9:00 AM