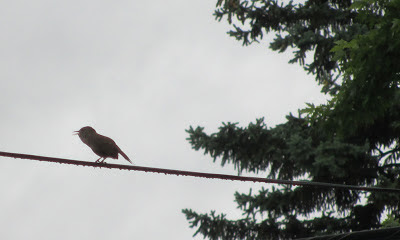 The wren first appeared in our backyard a couple of weeks ago, announcing his presence with what the Cornell Lab of Ornithology describes as a “rush-and-jumble song.” I was delighted to see him checking out the small bird house near the patio, then became alarmed when he headed over to the slightly larger one by the kitchen garden, because I thought the chickadees were still using it.

Wrens are known to be real estate hogs, stuffing many houses with twigs to form “dummy nests” so that other birds can’t use them; they sometimes go even further than that and actively eliminate the competiton. According to Cornell, wrens are sometimes the main reason for nest failure of bluebirds and chickadees, as well as some other species, which is why many birders don’t like them. So I was worried that the little fellow was going to do harm to the chickadee chicks. 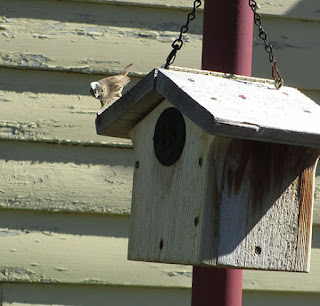 I scurried over to shoo him away, saying, “You get away from there! That’s the chickadee house! You use the other house!”

“You’re talking to a bird,” said my husband from his seat on the patio.

The wren scuttled onto a perch in our neighbor Sue’s lilac bush, and I noticed that she had a bird house next to her garage also. Aha!  No wonder our yard is a magnet for the little speculator.

I didn’t hear any peeps coming from the chickadee house, so I decided to inspect it to see if the chicks were okay (a well-designed bird house will be easy to open so you can keep an eye on its inhabitants). What I found was a clearly abandoned nest. I then remembered seeing chickadees in the lilacs about a week ago, fluttering their wings like fledglings, but as they looked identical to the adults (not scruffy like robins) and I did not see them on the ground, I hadn’t put two and two together.

So I apologized to the wren, and he was soon happily stuffing twigs into both of our bird houses and, I suspect, Sue’s as well. 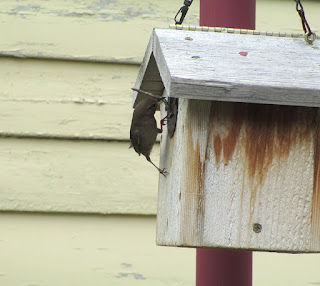 “In spring, the male establishes a small breeding territory by singing from exposed perches and putting stick foundations in prospective nest holes,” wrote Donald and Lillian Stokes in their Field Guide to Birds.

After several days of this, there was suddenly a noticeable absense of the wren’s musical bravado in the morning. Had his mate selected some other house down the block? If so, I was indeed sorry. They may be bad birds, but they’re voracious insectivores, and as a gardener first and bird watcher by extension, I would dearly love to have a family of wrens on pest patrol in my garden.

Then one morning I heard not only his by-now familiar burbling call, but a whole lot of chittering. I looked out the window to see two wrens engaged in a lively discussion as one perched on a nearby branch while the other went in and out of each of the houses.

It was fun to see this “songful tour of inspection,” as described by Christopher Leahy in The Birdwatcher’s Companion, after which the female chooses a nest and finishes it. And she’s a clever bird in setting up housekeeping, for she is known to stash a few spider egg sacs in the nest so that the spiders will devour any parasites that may infest the chicks, say the folks at Cornell. 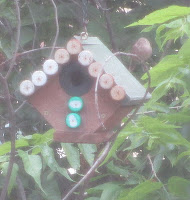 I’m having a hard time telling which house she chose, as they appear to be dallying about both houses still. They are very active little birds, and the sexes look alike, so I find myself wondering if there is, indeed, only one female. According to Leahy, the name wren, which comes from the Anglo Saxons, has a traditional second meaning of one who is lascivious, possibly because of the polygamy of male wrens.
Posted by Sharon Parker at 2:32 PM